Between law and health, it is a hard-knock life

Lanre Tejuoso straddles two worlds—lawmaking and the medical world. He was one of two doctors in the eighth Senate, the other being former senate president… 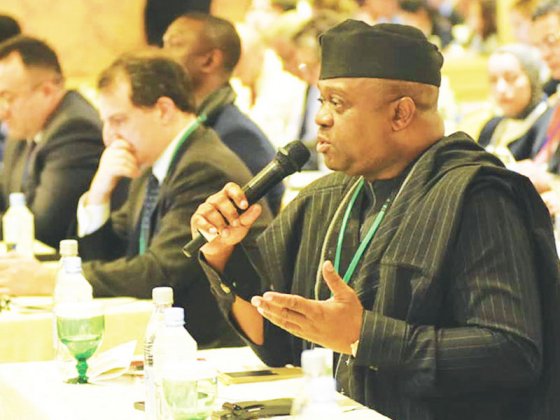 Lanre Tejuoso straddles two worlds—lawmaking and the medical world. He was one of only two doctors in the Senate, the other being Senate president Bukola Saraki.

Lanre Tejuoso straddles two worlds—lawmaking and the medical world. He was one of two doctors in the eighth Senate, the other being former senate president Bukola Saraki.

Nearly every lawmaker is on social media, and that’s where every Nigerian can reach them freely—and lash out.

“She narrated how a general hospital in Lagos would receive blood donation from the husband of a pregnant wife,” he said

“Now, when this blood is eventually needed by the woman, the hospital management requests that the couple make payment to purchase same blood the husband had just donated.”

As chair of the Senate health committee, he must have heard a lot of such complaints.

“How about the issue of medical diagnosis? Same equipment, same medical condition but some of our doctors won’t find anything. Yet, same patient travels abroad under very same circumstances, the diagnosis is different and the prevailing ailment is found,” he says.

“Recently, a young man who had an accident five years ago in which he fractured his shoulder went for medical check-up. It took the hospital four hours to confirm his NHIS status with his HMO. There is also the issue of disease control and so on.”

His observations are recorded in a valedictory letter addressed to Nigerian youth. As the eighth assembly wound up, his representation of Ogun central ended: he left the committee and the Senate.

Pushing the legislative agenda for Nigeria has “been one of the toughest experiences,” says Tejuoso.

The challenges—some new, many carried over from decades past, others on the horizon—are many.

“The health sector suffered and continues to suffer its share of corruption, gross incompetence, and negligence and in some cases, total disregard for constituted authority,” says Tejuoso.

“But be rest assured that there are good men fighting back.”

It has taken more than a decade to midwife the National Health Act in 2014. And it took another four years until 2018 to get in place a key linchpin of the act—the provision that at least one per cent of Nigeria’s consolidated revenue be set aside for the Basic Health Care Provision Fund (BHCPF).

“The one per cent contribution has occupied half of my advocacy as chairman of the Senate health committee,” he said this May.

“This advocacy included maximum pressure. It will be a legacy for this 8th Assembly.”

That saw N57.15 billion earmarked for health care of Nigerians—everything from emergencies to primary care. It comes down to the money, and financing health care—especially universal health care—has come to define Tejuoso’s time in the Senate.

That, and universal health coverage. And he spent time talking them up—from the G20 meeting in Japan to the World Bank/IMF Spring Meeting in Washington, DC.

Nigeria is an oil-producing country, and using crude oil receipts to fund its health care has been a battleground for civil society organisations, nongovernment organisations, activists—and the lawmakers who have a background in medicine and feel like the health care of the entire country rests on their shoulders.

Back in 2001, countries of the African Union pledged to allocate at least 15% of their annual budget to health.

“Fast forward to 17 years later, Nigeria is battling with mere 4% while non-oil producing countries like Burkina Faso and Swaziland are chasing 15%,” said Tejuoso.

And Tejuoso has spent his time in the senate pushing an envelope that civil society organisations have been advancing. It is old: workshops have held around it, roundtables have discussed it to death, master classes have analysed it to within an inch of its life.

But it is not going away—money, money, money. From emergencies to vaccines to maternal and child care. Every one needs health care, but it has to be paid for. And who should pay for it?

“I anticipate the commitment of at least 100 million Nigerians to this model,” he said.

But, there is a but.

“However, concerns were raised regarding the management of funds,” he notes.

“As a matter of principle, we cannot play politics with the health sector. Throughout the process of developing these funding models, majority of the stakeholders in the health sector were carried along including international partners. We all want this to succeed and succeed it must. So I appeal to you to join the movement.

“The legislature, civil society organizations and other stakeholders will match all forms of disbursement and management of funds with strict corporate engagement to ensure the highest standard of transparency and accountability.”

One of the lone two lawmakers with any background in health care in the senate is over and out. New senators are in. What will the legislative agenda for health look like?