Elder statesman, Alhaji Bashir Othman Tofa who died on Monday has been buried in Kano after a funeral prayer attended by hundreds 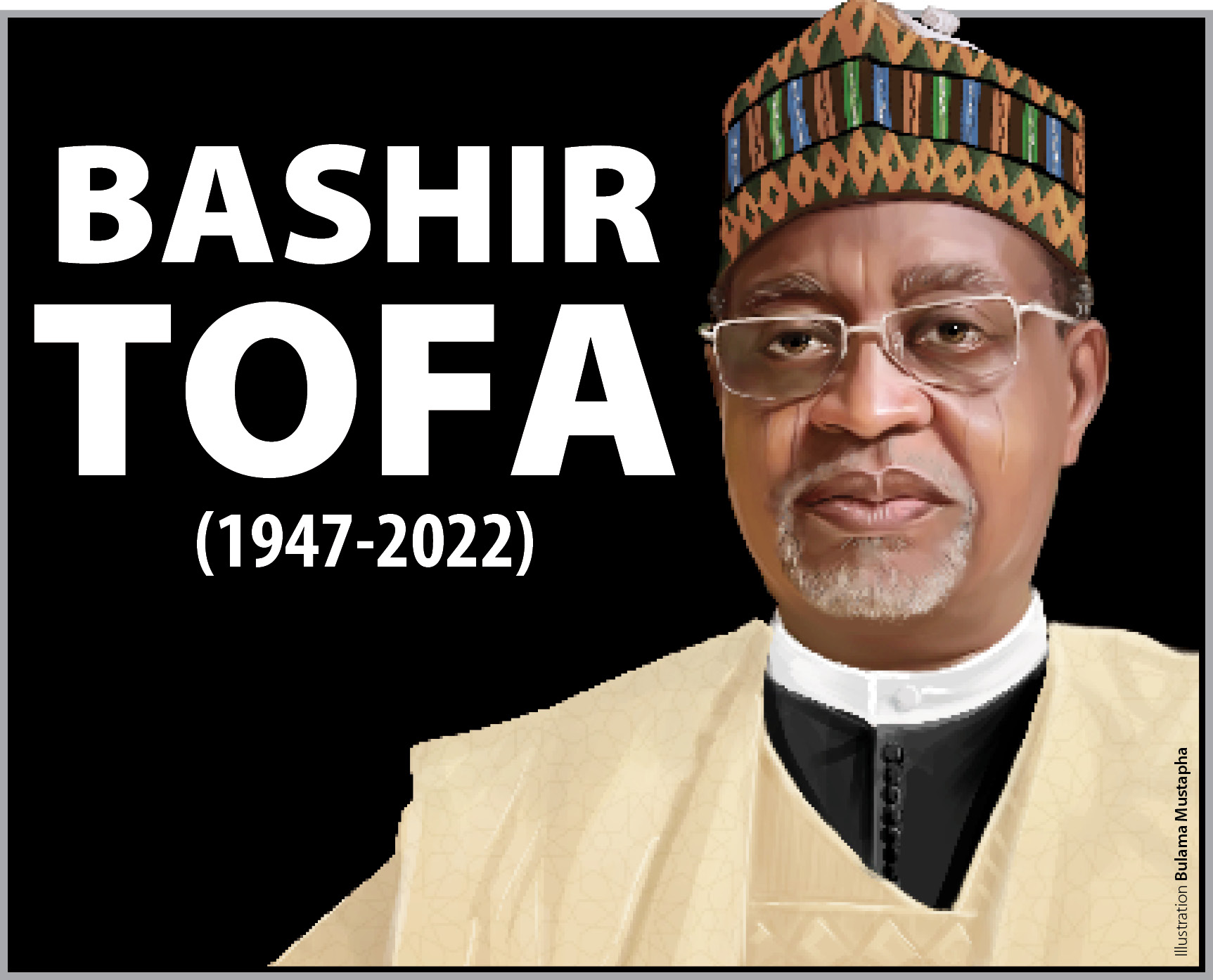 Elder statesman, Alhaji Bashir Othman Tofa who died on Monday has been buried in Kano after a funeral prayer attended by hundreds of people from all walks of life.  He was a businessman, politician, author, activist, journalist and a strong contender during the 1993 presidential election said to be the freest in Nigerian history.

The torrent of condolences that have been trickling in since the announcement of his death is evidence of the huge legacy he left behind during his 75 years on earth.

His death, it is believed, has left a huge gap not only in the Nigerian polity but also in Africa as a whole considering the way he bared his mind on issues and called out those in positions of authority.

He died in the early hours of Monday after battling health issues that kept him at the Intensive Care Unit (ICU) of the Aminu Kano Teaching Hospital in Kano.

The news of his death began making waves while he was at the ICU a few days ago but was debunked by a member of the family.  As a nationalist, late Tofa had a dream to better position Nigeria among the top countries in the comity of nations when he threw his hat in the ring as a presidential candidate for the defunct National Republican Convention (NRC) in the annulled 1993 presidential election.

Since the election was annulled, little was heard of the soft-spoken Tofa in the political space until when he vied for the presidency again in 2011 on the platform of the All Nigeria Peoples Party (ANPP).

He also championed the formation of a group in Kano State known as the Kano Concerned Citizens Initiative (KCCI).

Late Tofa will forever be remembered for the role he played as the chairman of KCCI, the initiative that played a vital role in ensuring the reign of peace before and after the then Emir of Kano, Muhammadu Sanusi II was deposed by the Kano State government.

The initiative gradually became the voice of the voiceless in Kano State and had also fully brought him back into the state’s affairs.

Tofa and the group were at a point tagged the major opposition to the government of Governor Abdullahi Umar Ganduje, an allegation he denied in his last interview with Daily Trust.

“I am not an enemy of Gov Ganduje. He needs no enemy. I am trying hard to use the little time I have to do some good. I, therefore, have no time for enmity or of some evil hatchet jobs against anyone or the state. We continue to pray for Ganduje that Allah shall guide him before the end of his term, for neither him nor anyone knows what is to come,” he said.

His books, according to many educationists, have positively impacted on the lives of many people, especially students and researchers. In fact, his love for writing is one of the reasons he has never spoken about his experience from the 1993 annulled presidential election, indicating that a book on his experience was in the offing.

During the Daily Trust’s last interview with him on March 21, 2021, he declined all entreaties to get him to share his experience on the election and all the moves behind the scene, promising that he will share all his experience in a book he was writing.

Tofa also surprised a lot of his well-wishers on Monday when it was discovered that he already made plans for his demise by making a reservation for his burial space at the Hajj Camp Cemetery.

It was revealed that he had reserved a space between his father and mother’s graves years ago. When the story came to the fore, it touched many that attended his burial. Another shocker from late Tofa was the will he left behind that after his burial there shouldn’t be any traditional sitting for mourning (zaman makoki).

One of his sons, Musaddiq Othman Tofa revealed the will to mourners during the burial of his late father.

Before his death, Tofa was a businessman, an oil trader and industrialist and founder of now rested bilingual newspaper, The Pen/Alkalami. He was chairman of International Petro-Energy Company (IPEC) and Abba Othman and Sons Ltd. He was also a board member in Impex Ventures, Century Merchant Bank and General Metal Products Ltd.

President Muhammadu Buhari Monday described the late Alhaji Bashir Tofa as a true nationalist that would be difficult to replace.

The President, in a statement issued by his media aide, Garba Shehu, said the deceased set up the Bureau for Islamic Propagation (BIP) in the mid-80s that helped to unite Muslim scholars in the northern states, thereby narrowing the differences that characterised their relationships.

“He was, till the end, a patriot to the core. He envisaged a better Nigeria for all. We pray that this dream and collective aspiration and necessary commitment will not go with him. We owe it to his memory and to the nation”.

In a statement, former Vice President Atiku Abubakar Atiku said the late Tofa was a thoroughbred democrat whose contributions to the growth of democratic governance in Nigeria are invaluable.

In a statement signed by the Commissioner for Information, Malam Muhammad Garba, the governor noted the sacrifices of Tofa, who started taking up leadership responsibilities at an early age when he was elected councillor in Tofa in his late 20s and remained vibrant and dynamic up till the time of his death.

“The legacy of his political beliefs and triumphs will be important footnotes in the literature of Nigeria’s government and politics for generations yet to come,” he said.

Ekiti State Governor and Chairman of Nigeria Governors’ Forum (NGF), Kayode Fayemi said Tofa held political beliefs and ideologies, which made him a democrat and elder statesman; noting that his contributions to the democratic experience in Nigeria cannot be forgotten.

Alhaji Jamiu, son of late MKO Abiola, who slugged it out with Tofa for the presidency in 1993, also extolled the virtues of the Kano-born politician describing him as a key figure in the country’s democratic processes.

He said, “When Alhaji Bashir Tofa competed against my father I was very young. I was not even up to 17 years old but I clearly remember Alhaji Tofa being described as a young successful businessman.

“However, after the annulment and the death of both my parents, I returned to Nigeria to settle down and that was when I began to really know who Alhaji Bashir Tofa was.

“What comes to mind is how he always seemed like a vocal voice calling out to the conscience of our society. I think it was normal for him to end up playing such a role because he was a part and parcel of June 12; he was a key figure in this democratic event that catapulted the image of Nigeria to greater heights even though the election was annulled. The history of June 12 cannot be written without this great man.”

The All Progressives Congress (APC) in a statement by the Yobe State Governor and Chairman of the APC Caretaker/Extraordinary Convention Planning Committee, Mai Mala Buni said the late Tofa “Was an iconic politician who shared the values of politics as a call to service, to promote good governance and to improve the lives of the electorates.”

The Arewa Consultative Forum (ACF) in a statement by its National Publicity Secretary, Emmanuel Yawe, described Tofa as a patriot who wanted to serve his country saying his participation in the 1993 presidential election as the candidate of the NRC overshadowed all other things he did.

“Maybe because Moshood Abiola was involved or because it was finally annulled. Every time that election was mentioned, his name just came up. It was as if he never did anything in life other than participating in that election. Whatever happened to that election should not be blamed on him, he was as much a victim of military meddlesomeness in politics as Abiola,” the ACF said.

Members of the Northern Elders Forum (NEF) said they were deeply saddened by the death of Alhaji Tofa.

The elders in a statement by their Director, Publicity and Advocacy, Hakeem Baba-Ahmed, said that the North has lost an indefatigable defender of its dignity and values.

“The Forum lost a loyal founding member, a firm believer in responsible and visionary leadership. Alhaji Bashir was the embodiment of the best combination of private enterprise and unparalleled philanthropy. His landmarks in Kano and the national economy will match the best.

“History will record that Alhaji Bashir’s life was well spent in the service of God and fellow humans, and he will continue to be an inspiration to many generations of Nigerians.”

The Coalition of Northern Groups (CNG) also expressed sadness over the death of Tofa, describing him as “a great statesman and mentor.”

The CNG in a condolence message issued by its spokesperson, Abdul-Azeez Suleiman, said it owed immeasurable gratitude to the late Tofa whose leadership, sacrifice, statesmanship, patriotism and unwavering commitment to the interests of the people of Northern Nigeria and citizens of Nigeria as a whole had few parallels.

Born on June 20, 1947, late Tofa had his primary education at Shahuci Junior Primary, Kano and then continued studies at City Senior Primary School in Kano. From 1962 to 1966, he attended Provincial College, Kano.

After completing his studies at the Provincial school, he worked for Royal Exchange Insurance Company from 1967 to 1968. From 1970 to 1973, he attended City of London College. Tofa’s sojourn into politics started in 1976 when he was a councillor of Dawakin Tofa Local Government Council; in 1977, he was elected a member of the Constituent Assembly.

During the Nigerian Second Republic, Tofa was at various times the secretary of the Kano branch of NPN, he later became the party’s national financial secretary and was a national member of the Green Revolution National Committee.

During the Third Republic, he was part of the Liberal Movement, which metamorphosed into the Liberal Convention when it was not registered as a political party, Tofa joined NRC in 1990. In 1993, when the Babangida administration introduced the Option A4 system, Tofa was elected the presidential candidate representing Kano.

During the party primaries, he defeated Pere Ajunwa, Joe Nwodo and Dalhatu Tafida to clinch the NRC ticket.