Bandits have taken over many villages in Gassol and Karim Lamido local government areas of Taraba State. Daily Trust on Sunday findings revealed that the… 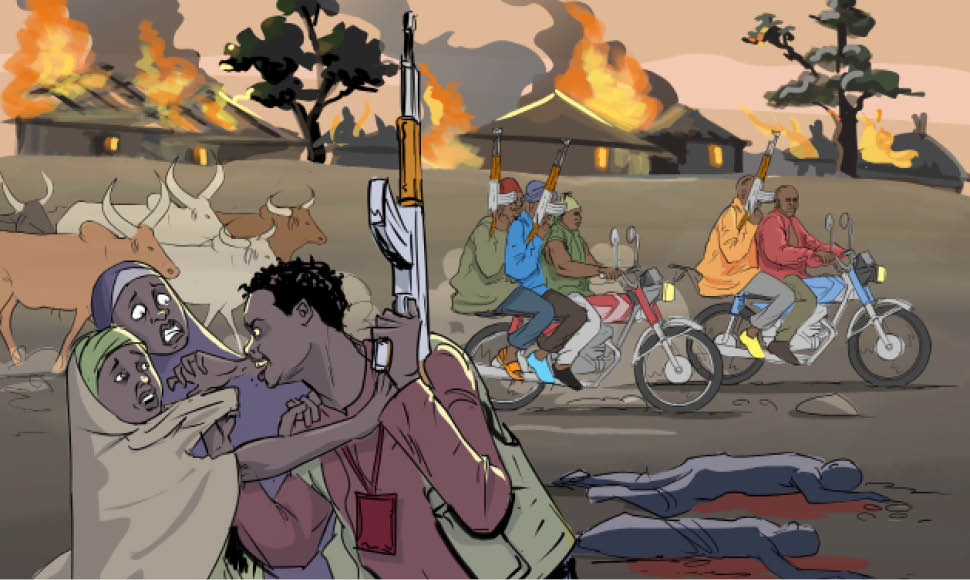 Bandits have taken over many villages in Gassol and Karim Lamido local government areas of Taraba State.

Daily Trust on Sunday findings revealed that the worst affected by the bandits’ activities is Kambari town.

Kambari village in Karim Lamido Local Government Area is located on the bank of River Benue and not far away from the border of Plateau State.

The town and other neighbouring villages is also surrounded by thick forests and without access road which makes it a safe heaven for criminals.

The dare devil bandits, it was further learnt, have forced the police and vigilante to abandon their duty posts in that axis.

The bandits, according to sources in the area, forcefully sleep with house wives and young girls.

Residents of the town have resigned to fate as there is no any action from the authorities to checkmate the criminal activities.

Similarly, other villages in both Gassol and Karim Lamido local government areas located on the bank of River Benue are also under the threat of the terrorists.

Residents of six villages across River Benue, in Karim Lamido local government, were forced to relocate to other places because of criminal activities of the terrorists.

Similarly, WuroJam, Karar, Shika, Amar, Zip, WuruJam, Illela and Maigemu among others are now under the threat of the terrorists.

Daily Trust on Sunday gathered that the bandits move freely day and night with their weapons in some of the affected villages and towns.

Findings revealed that the terrorists have became lords to themselves and are kidnapping residents without let or hindrance.

In some of the affected villages, young boys were said to have been recruited by the terrorists and are the ones informing the terrorists of houses of wealthy individuals.

A resident of Kambari town who sought anonymity told Daily Trust on Sunday that the bandits have taken over the town and it is now their operational base.

According to him, many residents have relocated to Mutumbiyu town and other places.

He said the bandits are mostly from Zamfara and Katsina and they number over 200.

“There is no presence of police and vigilante in Kambari, terrorists are in total control of the town and they move freely with their arms,” he said.

A former resident of the area, who relocated to Mutumbiyu town, said it is no longer safe to stay in the town.

“We are under siege; we need the government to intervene by sending soldiers to chase out the terrorists because they are regrouping every day and also recruiting our young men,” he said.

He revealed that the terrorists are responsible of most of the kidnappings and killings in parts of Karim Lamido, Gassol and Bali local government areas of the state.

Further findings revealed that the Army has been sent to Gassol district and has engaged the terrorists.

It was gathered that the terrorists suffered serious set back following deployment of soldiers and as result, some of the terrorists are relocating out of the area.

A resident of Gassol town, Malam Rabiu Saidu, told Daily Trust on Sunday in a telephone interview that the arrival of soldiers in Gassol district has brought relief to the people.

He said the soldiers are doing a good job as many of the terrorists are now moving out but urged the soldiers to extend their operation to Kambari and other areas across River Benue.

The chairman of Karim Lamido council, Mr Markus Hamidu, did not answer calls or reply SMS sent to him on the issue.

The police spoke person of Taraba command, DSP Usman Abdullahi, when contacted said there is no report of such attack at the command.

He said the Police Divisional office in Karim Lamido did not send any report that terrorists have taken over any village or town in the area.

“If it is true that terrorists have taken over Kambari town or any other village, why didn’t residents inform the police?” he said.