Bama town suffered its fair share of terror due to the Boko Haram crisis, which left many of its residents displaced. In recent times, the… 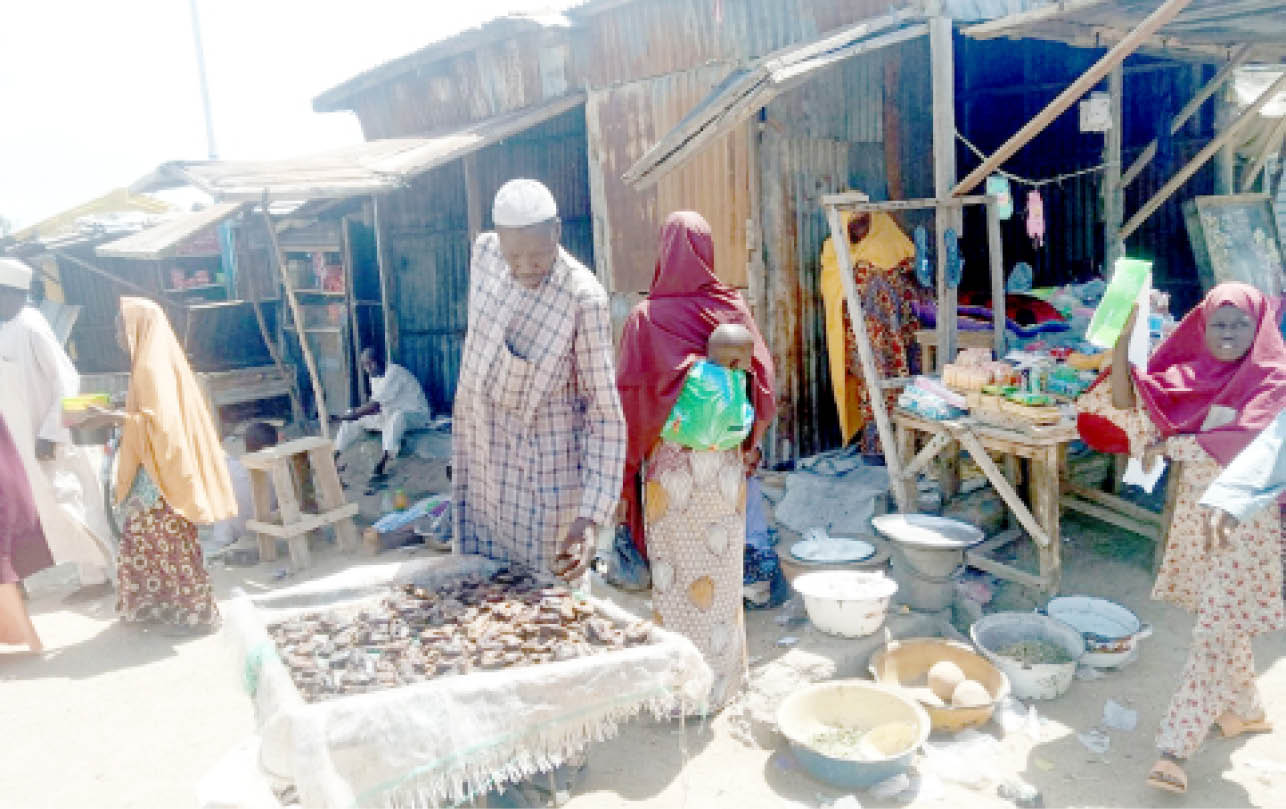 A section of Bama market

Bama town suffered its fair share of terror due to the Boko Haram crisis, which left many of its residents displaced. In recent times, the Borno State Government has worked towards reconstructing the town and making it more hospitable for its residents, Daily Trust Saturday reports.

Bama town was one of the strongholds of Boko Haram terrorists, which also served as the second capital of the caliphate of the Abubakar Shekau-led group, but it was liberated by the Nigerian military in March 2015.

Subsequently, the Borno State Government reconstructed houses and public buildings destroyed by the insurgents and embarked on rehabilitation and resettlement of internally displaced persons to their ancestral homes.

Governor Babagana Umara Zulum of Borno State had last week spent three days undertaking humanitarian support and social protection projects, where more than 90,000 vulnerable male and female residents, as well as community groups  in Bama, received a combined sum of about N400 million, alongside thousands of bags of food and textiles.

Our correspondent who visited Bama township last week observed the return of socioeconomic activities in different locations, with a large number of traders, artisans, commercial tricyclists, farmers and other businesses in markets, motor parks, schools and hospitals. Day-to-day activities were carried out unrestricted.

Some of the residents of the town shared their experiences.

A 25-year-old woman, Hajja Mohammed, who trekked 75 kilometres from Bama to Maiduguri to run away from Boko Haram insurgents, told Daily Trust that dignity had been restored to her life after their family members were resettled in Bama.

Hajja said, “The reason I said that dignity has been restored to our lives is because we lived at a displaced persons camp for nine years in a public school, sleeping on bare floor, but now, Alhamdulillah, we are back home with peace of mind and discharging our day-to-day activities, as well as going to school, Islamiyya and markets without any restriction, unlike what obtained in the camp, which is not conducive for living.

“I remember that when Boko Haram insurgents stormed Bama we moved out in fear. We trekked from Bama to Maiduguri alongside our family members and other residents. It was a bad experience, but we thank Allah for seeing us through the difficult challenges.

“One good thing is that relative peace has been restored and those unnecessary firing of gunshots and explosions are no more. We are now having a new life without fear of being kidnapped or killed by insurgents,” Hajja added.

Also, a 50-year-old Yanzi Abba Kyari said returning home after seven years in displaced persons camps in Maiduguri was a great relief. He thanked Governor Zulum for his giant stride toward the resettlement of displaced communities.

“We trekked from Bama to Maiduguri, where we spent seven years as refugees at the National Youth Service Corps (NYSC) camp, but we thank God that we are safe and back home.

“Alhamdulillah, life is going in the right direction with full of hope and enthusiasm. Our people are going to farm, traders are doing their businesses in the markets and our children are going to school. We appreciate Allah’s mercy and intervention of the military and the state government,” he said.

A 35-year-old Maryam Abdullahi Ibrahim also said: “I was born and brought up in Bama, but unfortunately, we were displaced by Boko Haram insurgents. We are happy that after seven years of suffering in the displaced persons camp we are back home to enjoy new life. Although it is not easy to start from the scratch, our life is now better under a peaceful atmosphere, which you can see for yourself. We now go to the market, and people are transacting their businesses without any fear. This new beginning is far better than what we experienced in the camp.”

“I trekked from Bama to Konduga, from where some people took me in a vehicle to Maiduguri, where I spent four years in a displaced persons camp.

“I was among the first batch of displaced persons resettled in Bama. At the initial period of resettlement, I did not have anything or job to do, but I later started trading some commodities on a small scale. Gradually, Allah transformed my life and I now have my own shop and capital. I am doing my trade freely and selling different types of grain.

“What I now sell include beans grown in Bama and other localities. The rice you see here are from different parts of Borno and neighbouring states. We buy the grains to sell in the Bama market to earn a living. We are grateful for the gradual improvement of security and economic activities in Bama.

“My life in the camp was like living in hell. I still remember my experience as a refuge in Maiduguri; it was restless and horrific. There were destructions and killings. Family ties were also broken, apart from unimaginable fear and grief. But I am grateful to the almighty Allah that I am back to my ancestral home with rest of mind and doing my own business.

“Peace has been restored, and the peace process has continued to strengthen other communities.

“The return of peace has paved the way for farming and socioeconomic activities. Our main challenge now in Bama is lack of enough foodstuff and potable water, medical personnel like doctors, nurses and other paramedics to handle health-related problems and  lack of drugs in the general hospital.

“Another challenge facing resettled communities is lack of teachers in public schools for our children. Schools have been reopened but there are no teachers.

”Even the local Tsangaya schools are not left out of the challenge. Children are just roaming the streets because malams don’t have time due to shortage of food. But we thank the state governor who has distributed food items to residents of Bama.

“Another major challenge facing resettled communities in Bama is on farming activities. We are only allowed to plant beans and groundnuts. We are not allowed to plant maize, sorghum and millet. This is responsible for the shortage of foodstuff in Bama. As a result of this, whenever you get money you spend it to buy food. However, the recent distribution of food items will help to stabilise the situation,” Modu said.

Isa Usman, popularly known as Dabo, a famous vulcanizer at Bama market, told our correspondent that he fled the town on foot to a displaced persons camp in Maiduguri when Boko Haram insurgents seized it, but he has returned home to continue his job.

“When Boko Haram captured Bama, it was the greatest torment of my life. We trekked from Bama to Maiduguri to escape the atrocities of the terrorists in 2014. I spent three years in the camp and subsequently moved to Abuja to get a job.

“When I heard that the state government resettled the people of Bama after the military liberated the town, I decided to return home; and fortunately, when I came back, I became comfortable and decided to stay and continue my job. Bama is picking up gradually, especially in economic activities. Life is going on normally and the impression people have about the town has changed. You have seen it yourself that things are going on well with us.

“We are appealing to our governor to open some of our major markets and construct roads to boost economic activities. Many people want to return to their businesses but security restrictions cannot allow them to do so,” Dabo said.

Another trader at Bama market, Hassan Bukar Bama, told Daily Trust Saturday that thousands of resettled communities had heaved a sigh of relief.

He said, “I must confess that we have witnessed positive change in Bama since we returned from the displaced persons camp. We appreciate the efforts of the state government and nongovernmental organisations for their support.”

Bukar, who said he experienced life in Bama under the leadership of Boko Haram terrorists for some weeks, revealed, “Life under the insurgents was unbearable and full of unimaginable torture and killings.

“I once lived at Dalori camp in Maiduguri and later moved to that of the NYSC, but when the military sacked the Boko Haram terrorists from Bama and peace was restored, the state government returned us. We have since begun another life under a peaceful atmosphere. I was among the first set of displaced persons resettled at Bama. And, Alhamdulillah, life is moving on, although at a slow pace.

“Our major challenge now is the issue of farming because there is still the fear that there are terrorists in the hinterland. So farmers cannot go beyond 2kilometers from the town. The most disturbing part of the trend is the restriction of crops to grow in Bama. We are only allowed to plant beans and groundnut, while other crops like maize, sorghum and millet are not allowed.

“Although some nongovernmental organisations are distributing foodstuff in Bama, it is not enough to cater for all the residents. We depend on Allah. Alhamdulillah, we have witnessed positive change, except the rapid inflation of commodities as prices of food items have skyrocketed.

“The terrorists are still roaming the bushes and we cannot go there to farm. This situation is indirectly affecting the people of Bama town, particularly in the area of farming. You can even see the reflection of the problem from our vegetable market, which has few commodities and essential items. Apart from that, many shops are still locked. You can see for yourself that the entire vegetable market is dry because we are not getting the commodities; we rely on supply from Maiduguri, which does not come regularly,” Bukar narrated.

A carpenter at Bakin Kasuwan Bama, Bukar Kurra, also recounted his ordeal, saying he was in Bama when Boko Haram took over the town, but he later ran to Maiduguri, where he spent four years as a refugee.

He said, “At the displaced persons camp in Maiduguri, life was terrible as we lived under a deplorable condition. We are grateful that in Bama, life has started taking shape. Alhamdulillah, we are getting our pressing needs like food, clothes and education. Most importantly, peace has been restored in Bama and the road to Maiduguri. However, things are moving at a slow pace, but we are grateful to God.”

Also giving his account, a tailor in Bama market, Kakaye Fannami said, “We are grateful to God for the restoration of peace after a difficult experience at camps in Maiduguri. We thank God that we have returned home and there is normalcy, almost equivalent to life before the Boko Haram invasion. This year, there is improvement in farming activities when compared to what happened last season. We hope to witness improvement in security so as to increase the quantity of food in Bama.”

“One of the major challenges hindering the progress of the people of Bama, especially farmers, are the activities of Boko Haram terrorists in the bushes. They attack and rob farmers of their seeds, herbicides and other equipment, which is affecting yield. But the military recently carried out operations in the bushes, killed some of them and dispersed others. That action greatly reduced incidents of Boko Haram attacks in our farmlands.”

Responding to the level of patronage of people to his tailoring service, Fannami said, “Alhamdulillah, people are patronising our services and we are getting our daily needs. This tailoring work is my only means of livelihood. Since I returned to Bama almost one year ago, it is this job that I have been doing to feed my family. And I can tell you that things are improving and life is going on normally for me.”