Two unions in the aviation sector have commended President Muhammadu Buhari for signing the new N30,000 minimum wage into law. The unions, namely the Air… 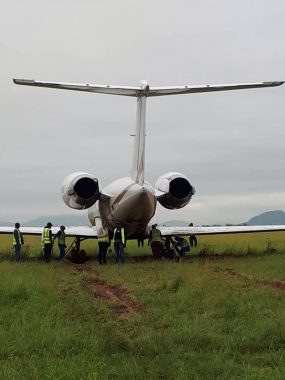 Two unions in the aviation sector have commended President Muhammadu Buhari for signing the new N30,000 minimum wage into law.

The unions, namely the Air Transport Services Senior Staff Association (ATSSSAN) and the National Union of Air Transport Employees (NUATE), made the commendation in separate interviews with the News Agency of Nigeria (NAN) on Monday in Lagos.

NAN reports that the president had on April 18 assented to the Minimum Wage Repeal and Enactment Act 2019 ahead the May 1 workers Day Celebration.

ATSSSAN President, Mr Ilitrus Ahmadu, said the move was a welcome development and in response to the yearnings of Nigerian workers.

He said: “Kudos to the President for seeing reason to have signed it into law and politics aside, it will go a long way to motivate workers to put in their best into work thereby increasing productivity.

“The development is good for the sake of stability of the economy because the increase will take care of the cost of living that has risen over a period of time.

“Therefore, it is a good thing for the Nigeria labour and the Nigerian workers.”

Ahmadu, however, noted that even the N30,000 was not up to the global standard as Nigeria ranked one of the least minimum wages in Africa.

He expressed optimism that state governments and other employers of labour would key quickly into the implementation of the new minimum wage.

The ATSSSAN president said: “My prayer now is the implementation, that the state governments will be able to see reason they should dedicate resources to implement the N30,000 minimum wage.

“I am saying this considering the over bloated size of workers at the state and local governments in the country.

“For us in the aviation industry, I believe we have gone beyond the N30,000 minimum wage because I do not think there is any aviation agency that pay less than N30,000 for their least employees.”

Also, Mr Abba Ocheme, General Secretary, NUATE, said the aviation unions were already in consultation on how to renegotiate the salary of workers in the sector.

“We welcome the signing of the new minimum wage but we are also aware of the work ahead. We need to negotiate with the employers to see how best it can be implemented.

“We know that some of the employers are already stretched in terms of workers’ salaries and this is going to create an additional burden for them,” Ocheme said. (NAN)