“There are few of them that are also running. One says he is Atiku, how many times has he been running? He is always on… 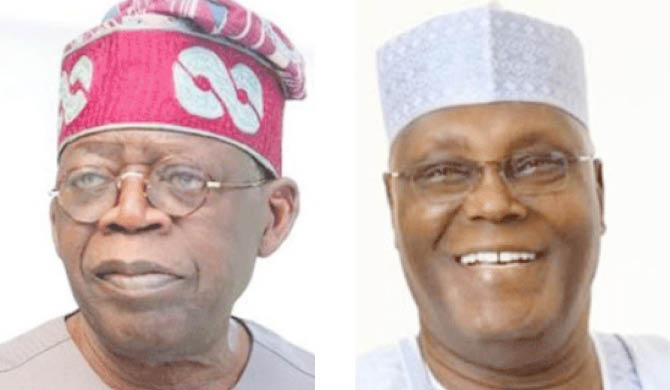 “There are few of them that are also running. One says he is Atiku, how many times has he been running? He is always on the run. People should tell him to go and rest.” Those are the words of the presidential candidate of the All Progressives Congress (APC), Bola Ahmed Tinubu, at a campaign meeting with Niger Delta monarchs last Friday in Delta State about his major opponent, former Vice President Atiku Abubakar of the Peoples Democratic Party (PDP).

This is the kind of friendly fire that has been characteristic of the two leading candidates about each other, since Atiku, I think, first set the tone when, following the APC primaries, he sent out a public message to Tinubu, saying: “Congratulations on your emergence as your party’s presidential candidate. It has been a hard-fought contest, but that you prevailed confirms your tenacity- AA.” Tinubu, in turn, had replied that “I look forward to squaring up with him as a worthy opponent in the coming election. I have known the former vice president as a formidable politician and a patriot who believes in the unity and progress of our dear country.”.

Beyond the banters between Atiku and Tinubu, however, the two men are running very diffident campaigns. It looks to me that the APC presidential candidate has been running perhaps the smartest campaign in Nigeria since the 1993 presidential election, at least with regards to both the broader question of campaign optics—the most difficult part of a campaign to manage for any candidate anywhere in an election of this magnitude—and the finer details of campaign strategy and messaging. There are many things to say on this, but a few will do for now.

First, the biggest challenge of Tinubu’s presidential bid has been how he positions himself to President Buhari both in terms of the latter’s records in office and the optics of the personal relationship between them, because, if for nothing else, their match-up goes against the template of god-father/god-son that we are more familiar with in such situations. The match between an outing president of a ruling party like Buhari and the party’s presidential candidate in the mold of Tinubu is simply unlike any other we have seen in Nigerian elections. Tinubu ranks below Buhari within the party, but he is not Obasanjo’s Yar’adua.

By their individual antecedents before they joined forces in 2013, and their rather difficult-to-explain relationship since then, Tinubu is really more of Buhari’s political partner, not a protégé.

That makes the relationship between the pair a potentially weak point that can explode or which opponents within and outside the party can easily exploit. When the late President Yar’adua ran in 2007, he did so practically on the tails of Obasanjo, the same way many governors spearhead the campaigns of their handpicked successors. Much the same would have been true if either Vice President Yemi Osinbajo or Senate President Ahmed Lawan had been the APC presidential candidate. Like Yar’adua, either Lawan or Osinbajo would have had to run on Buhari’s record almost entirely and still depend on his actively leading their campaign. Tinubu’s case has clearly been different, and so far, he has successfully managed his positioning to Buhari in every aspect.

Tinubu has also managed the optics around his age and health quite well so far. He has carefully chosen which events to attend himself, which to have Senator Kashim Shettima, his vice-presidential candidate, represent him or which to forgo altogether. But where he has personally attended, he has been in full control of himself and the entire event, lending credence to Shettima’s perceptive idea that the job of a president is not to carry bricks but to lead and coordinate the affairs of the country. His success in this is a campaign messaging and communication of its own that the candidate is prepared and has what it takes personally and collectively to do the job.

Most importantly, the APC presidential campaign team has so far got the overall campaign strategy and messaging right. As an outsider looking in, the strategy seems to me to be: to win the most votes—and states—in the North and South West, but to make sure to achieve what is required by the electoral law in the South East and South South. For this reason, while Tinubu has toured every part of the country so far, he has given priority to the areas his campaign fortunes depend on the most according to this overall strategy: the Pa Fasoranti/Afenifere meeting, the meetings with traditional, religious and business leaders in Kano, the formal launch of the campaign in Jos, the strategic meetings with leaders in Minna, Owerri, Abakaliki, and Gbaramatu, and now, the rallies in Lagos, as the campaign train continues.

All of these are clearly designed to build all the necessary coalitions needed to deliver the winning votes in line with this overall strategy, since in Nigeria, votes often cascade downwards from certain category of leaders, rather than from the so-called “grassroots”. But perhaps the most tactical masterclass that the Tinubu campaign has dealt his opponents in this campaign are his meeting with the leadership of the Christian Association of Nigeria (CAN) and his attendance at the flag-off ceremony of the Kolmani Oil Filed in Bauchi last week. But to understand how and why these two moves are a tactical scoop for Tinubu, we must look at how his main opponent, Atiku Abubakar of the PDP, failed at both.

When Tinubu sat with CAN to discuss matters relating to the election and the nation, he was bold. He clarified some positions but also reinforced others by standing his ground over the choice of his presidential running-mate in Senator Kashim Shettima, perhaps the only reason CAN decided to hold the entire event with all presidential candidates in the first place. At that meeting with CAN, Tinubu did not give anything away that could offend Christian voters or other sensibilities in Nigeria’s very complex electorate. More importantly, by standing his ground on Shettima, he reassured Nigerians across the North whose votes his path to Aso Rock needs the most.

Secondly, by appearing alongside Buhari to flag-off the business end of oil discovery in Northern Nigeria, he struck a code that goes to the heart of politics in the region. The message is clear even by just his being there: “I will continue with this project if you help me win this election”. All the northern leaders there understood the import of Tinubu’s attendance at that event, and I am sure, including the Governor of Bauchi State, Senator Bala Mohammed, a politician in opposition PDP. The voters in the region will that too.

The idea of oil in commercial quantities anywhere in the North is more than an economic issue for northerners. It is deeply emotional, regardless of how much is produced. For northerners, Kolmani is a refutation, nay, a repudiation of all the unwholesome insults they have received over the oil in the Niger Delta over the past 60 years. Any candidate who needs their votes would need to show that he or she stands with them on this at the moment. That is exactly what Tinubu achieved last Tuesday at Kolmani. But it is also what Atiku—who should know of all these more than me—failed to understand or realise.

Instead, Atiku was with the leadership of CAN, telling them—and the country—that CAN’s agenda for Nigeria is precisely his own agenda, and swearing to God that he will faithfully implement it should he be elected. I cannot think of a more destructive political own-goal than that statement in Nigerian politics, today or at any time. But then again, my job is merely to analyse politics.