Ahead of the commencement of the 2023 election campaigns tomorrow, the presidential candidate of the Peoples Democratic Party (PDP) and former vice president of Nigeria,… 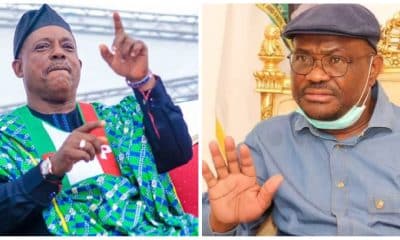 Ahead of the commencement of the 2023 election campaigns tomorrow, the presidential candidate of the Peoples Democratic Party (PDP) and former vice president of Nigeria, Atiku Abubakar, has made key appointments aimed at strengthening his presidential campaign structure.

The appointees are former Senate presidents, Dr Bukola Saraki as Special Envoy to the presidential candidate and Senator Pius Anyim, as Special Adviser.

Meantime, in what looks like putting an end to the crisis rocking the party and finally abandoning Rivers State Governor Nyesom Wike and his group, which had earlier pulled out of the Atiku campaign, the former vice president has also appointed former national chairman of the party, Prince Uche Secondus, as Technical Adviser.

The appointments are to take immediate effect.

Atiku also charged the appointees to use their vast political experience in ensuring that the PDP presidential campaign records resounding success in the 2023 election.

Secondus, who was pushed out as the national chairman of the PDP by Wike, has been at loggerheads with the governor since then and his appointment might be seen as a spite on the governor.

In a swift reaction, Secondus said he had just received the news of his appointment as Technical Adviser, adding, “The mission to rescue Nigeria that I initiated in 2018 will come to a fulfilment by the special grace of Almighty God.”

Meanwhile, the Director General of the Sarakiya Movement, Hon Abubakar Nuhu Adam, has said the group is already putting in place measures that would enable it to work for the success of the former vice president, Atiku Abubakar, in 2023.

Nuhu Adam told Daily Trust that after a series of meetings and deliberations with members of the group and their leader, Bukola Saraki, he was directed to inform Nigerians that they have declared their support for Atiku.

He also said members of the Sarakiya Movement have already been notified about this move and all our “members nationwide are from now on to begin in earnest to work for the candidature of Alhaji Atiku Abubakar, Wazirin Adamawa, as president of our great country, Nigeria.

“Also, we are to mobilise all the arsenal at their disposal to ensure the victory of Atiku Abubakar so as to salvage our country from the present predicament imposed on the people by the All Progressives Congress (APC) administration.

He said the only way to enjoy Nigeria again is for the people to vote out the APC and bring in the candidate of the PDP who has the requisite experience and support base across the country to bring about the needed change.