The Christian Association of Nigeria (CAN) has set agenda for the 18 candidates contesting the February 25, 2023, presidential election.  The religious body began an… 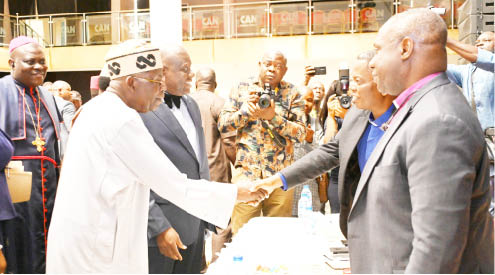 The Christian Association of Nigeria (CAN) has set agenda for the 18 candidates contesting the February 25, 2023, presidential election.

The religious body began an interactive session with all the presidential candidates on Tuesday. The Presidential Candidate of the All Progressives Congress (APC), Asiwaju Bola Ahmed Tinubu, was the guest of the association on Wednesday.

Atiku Abubakar of the Peoples Democratic Party (PDP) who was scheduled to meet the leadership of the association yesterday has not done so as of the time of this report.

It was gathered that the Presidential Candidate of the Labour Party (LP), Peter Obi may meet the association next week.

At the event held at the National Christian Centre, CAN presented a strategic document tagged, “The Charter for Future Nigeria” to Tinubu for a prosperous and peaceful Nigeria founded on justice and freedom for all.

Key demands in the charter include; state police or a decentralised policing system, devolution of power to states, equal rights for all religions and their adherents, right to self-determination by all ethnic groups, right to control natural resources by communities that bear them, no to open grazing and equitable electoral system that guarantees the right to vote and be voted for by all.

Daily Trust reports that the issue of the Muslim-Muslim ticket was not mentioned by the leadership of the association but Tinubu explained to them why he picked Shettima as his running mate. The body had rejected the same faith ticket months ago.

President of CAN, Archbishop Daniel Okoh, said the idea of the interaction was to come together to review their understanding of the Nigerian crisis of development and governance and collectively find a lasting solution.

“We have consulted with Nigerians of diverse religious, ethnic and social identities on the problems of the country and the solutions to them have been articulated in the strategic document we call ‘The Charter for Future Nigeria.’

“The Charter for Future Nigeria begins with a diagnosis of Nigeria’s problem and locates it primarily in an incoherent constitutional and institutional framework that defines governance and social and economic interactions in Nigeria.

He said that the document made genuine recommendations for resolving Nigeria’s recurrent crises that border on justice and fairness, equality of all ethnic and religious groups, equal access to basic economic and social rights, political freedom and an egalitarian and just social order.

The CAN boss said that the overriding concept in this transformation “is democratic citizenship”, which should be the focus of governance at all levels in Nigeria in promoting the socio-economic wellbeing of every Nigerian citizen irrespective of religion, ethnicity, or social pedigree.

He said there must be a clear indication that Nigerians have common citizenship and that every Nigerian should be treated as a Nigerian, no matter where he lives and that no Nigerian should be discriminated against on any matter of goods and services provided by any authority in Nigeria, whether at the federal or state levels.

Why I picked Shettima – Tinubu

“Why Senator Shettima? Why a same faith ticket?” he asked rhetorically.

“Well, I did not choose Senator Shettima so that we could form a same faith ticket. The ticket was constructed as a same progressive and people-based ideology ticket. I offer a confession. I selected Senator Shettima thinking more about who would best help me govern.

“Picking a Christian running mate would have been politically easier. But the easy way is rarely the right one. The selection of a running mate is at once a very momentous yet very intimate decision.

“Resting such a key decision on religious affiliation as the primary weight did not sit well with me. I am not saying there were not good and adequate potential running mates of the Christian faith. What I am saying is that the times we inhabit do not lend themselves to the good or adequate. We have urgent problems that lend themselves not to a Christian or Muslim solution. We need the best solution,” he said.

Tinubu who said he sees all Nigerians as equals and as brothers and sisters in the national family said that this means no one is inherently inferior or superior to anyone else, regardless of faith, place of origin, social status and gender.

Listing his historical support for the Church, he said that his belief in the need for secular government and faith-based organisations to work in unison is not something adopted recently to benefit his campaign.

He said that this cooperative agenda describes his entire political career and that as governor of Lagos State, he partnered with the Christians to improve lives and foster education, including returning mission schools to their owners, most of who are Christians.

He also promised that if elected, his door will be open to the leadership of CAN and that they will be consulted regularly on the affairs of the state.