At home with Mr Nigeria

On a cloudy evening of Thursday, September 8, 2022, while passing through the streets of Biu, Biu Local Government Area of Borno State, I came… 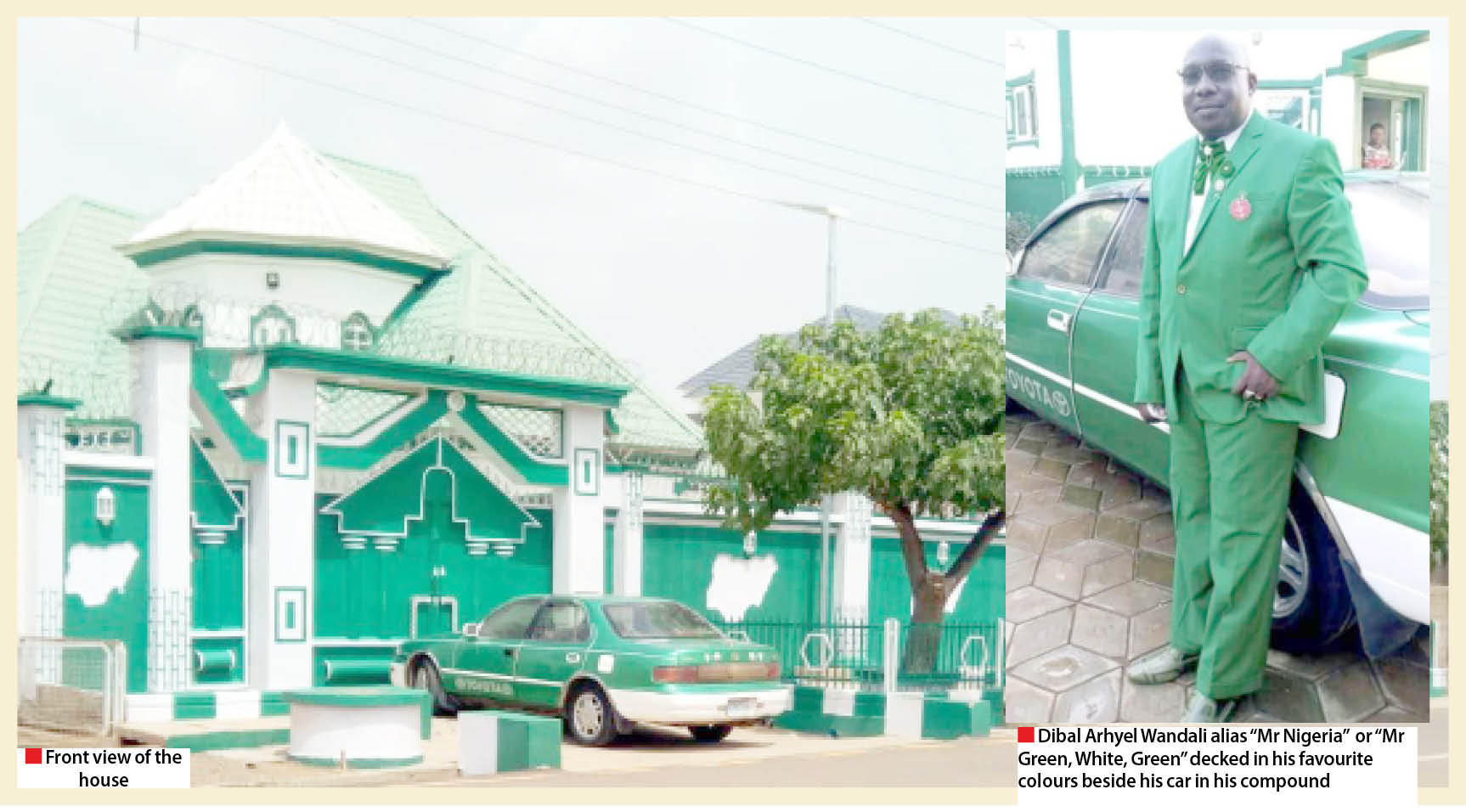 On a cloudy evening of Thursday, September 8, 2022, while passing through the streets of Biu, Biu Local Government Area of Borno State, I came across this uniquely painted house in beautifully attractive colours. Everything was painted in green and white, Nigeria’s national colours. The roofing, overhead water tank, walls, gate, and pavements. The sight was very attractive. So naturally, I was interested in finding out more about this good and patriotic citizen whose love for his country is unimaginable.

Therefore, I sought to know whose house it was from our driver-cum guide, Malam Salisu, a staff of the Nigerian Army University Biu (NAUB), who knows about the town and everything in Biu. He said it belongs to a highly patriotic man, who, because of his love for our dear country, goes by the name “Mr Nigeria” and is popularly known as “Green, White, Green.”

I asked Salisu to park in front of the house as I would like to admire it more at a close range and possibly meet this great Nigerian. I was not alone; Alhaji Sultan Hassan – a wonderful and jolly good fellow who was with me, followed suit. Thus began our search for Mr Nigeria, or “Mr Green, White, Green,” as he is popularly known.

We knocked on the door. After a while, there was a response from a pleasant and humble young man called Samson, who turned out to be the son of Mr Nigeria. After exchanging pleasantries and introductions, we told him our mission; we were fascinated with their house and would like to meet his father. He told us there was an emergency at Biu General Hospital, where his father works and he had to leave for the hospital.

Nonetheless, we talked some more, while reiterating our desire to meet this tremendous Nigerian, and so we left for the hospital. Thankfully, he attended to the matter and was informed that we were at his residence. He left for home; thus, we missed each other.

On realizing this, we had to go back to the beautiful house. Samson was on hand to receive us and told us that his father was in. As we entered the compound, Doctor Dibal Arhyel Wandali, Mr Nigeria or Mr Green White Green, in his trademark dressing of white embroidered with green colours, approached us, stretching his right hand for a warm handshake and welcomed us to his excellent abode. He ushered us into his tastefully furnished living room without wasting much time or formalities. Of course, everything in it was also in green and white, from the roofing to the floor. The walls, other ornaments, interior decorations, and furnishings were all in Nigeria’s national colours.

His lovely wife was also a great hostess. She greeted us and offered us refreshments – assorted non-alcoholic drinks and water. We spent time talking with Dr Wandali and his family as if we’d known each other for years. By sheer coincidence, Alhaji Sultan Hassan happened to know another retired senior military officer, Air Commodore John Dibal, who was just coming into town, and he also joined us.

But who is this patriotic Nigerian obsessed with our national colours to the admiration and envy of some? Dr Wandali is a highly qualified and experienced medical laboratory scientist with extensive hands-on expertise and experience in the set-up, implementation, and monitoring of laboratory programmes, and he works at the Biu General Hospital, Borno State. He has been working as a medical laboratory scientist since 1987 and takes joy and pride in being a Nigerian. This fact was attested to by all who know him. He usually dresses in green, white, green apparels and celebrates the national day with his friends, family neighbours and children, offering them gifts. All his cars are painted in green and white colours too.

He was born on October 19, 1963, in Wandali town, present-day Kwaya-Kusar Local Government Area of Borno State. He had his primary school education at Wandali Primary School from 1971-1977. He then proceeded to Government College Maiduguri, where he graduated in 1982. Shortly after, he was among 60 indigenes of Borno State to gain admission into the Polish Medical Institute “I.P. Pavlov”, Bulgaria. He graduated in 1986. He was at the Ahmadu Bello University Teaching Hospital (ABUTH) Zaria from 1991-1992. He did his National Youth Service Corps (NYSC) programme at the then National Guard Medical Reception Station (MRS) Sani Abacha Barracks, now Mogadishu Military Cantonment Hospital, Abuja, 1992-1993. Dr Wandali was at the Federal College of Veterinary and Medical Laboratory Technology (FCVMLT), National Veterinary Research Institute, Vom, Plateau State, from 1998-1999 and the University of Jos from 2003-2005, and 2018 for further studies. He also served as a Technical Aid Corps Volunteer in Rwanda for two years, from 2007 to 2009.

He has been an External Assessor of Medical Laboratory Technicians/Assistants examinations for more than 15 years. In addition, he has been involved in designing quality and health safety sections of operation plans in the country.

A multi-linguist, apart from his mother tongue (Bura), Hausa and English, he also speaks fluently and writes in Bulgarisky (Bulgarian) and Kirwanda. He is a happily married man with children, who enjoys promoting Nigeria, participating in health talks, and watching documentaries in his spare time.

While we were seated, Alhaji Sultan Hassan made a call to a friend, enquiring whether he knew Mr. Nigeria and his penchant for Nigerian colours. The man on the other end answered in the affirmative and added that he wouldn’t be surprised if the colour of his underwear is green and white.

To back up his claim, the casings of his two mobile phones were green and white. Indeed, it was an incredible honour to meet such a hospitable and patriotic Nigerian in the person of Dr Wandali. It is not surprising that he is called Mr. Nigeria or Mr Green, White, Green, and he likes promoting Nigeria. Everything about him is about Nigeria – its national colours, ethos, and values.

There is no doubt that people like him are rare; highly intelligent, humble, compassionate and a case study in nationalism and patriotism as they bring hope and a great sense of inspiration about the great future for this country. His hope, aspiration and optimism about Nigeria is unparalleled. It is, therefore, desirable that he should be emulated and further encouraged through recognition and reward by relevant government agencies.