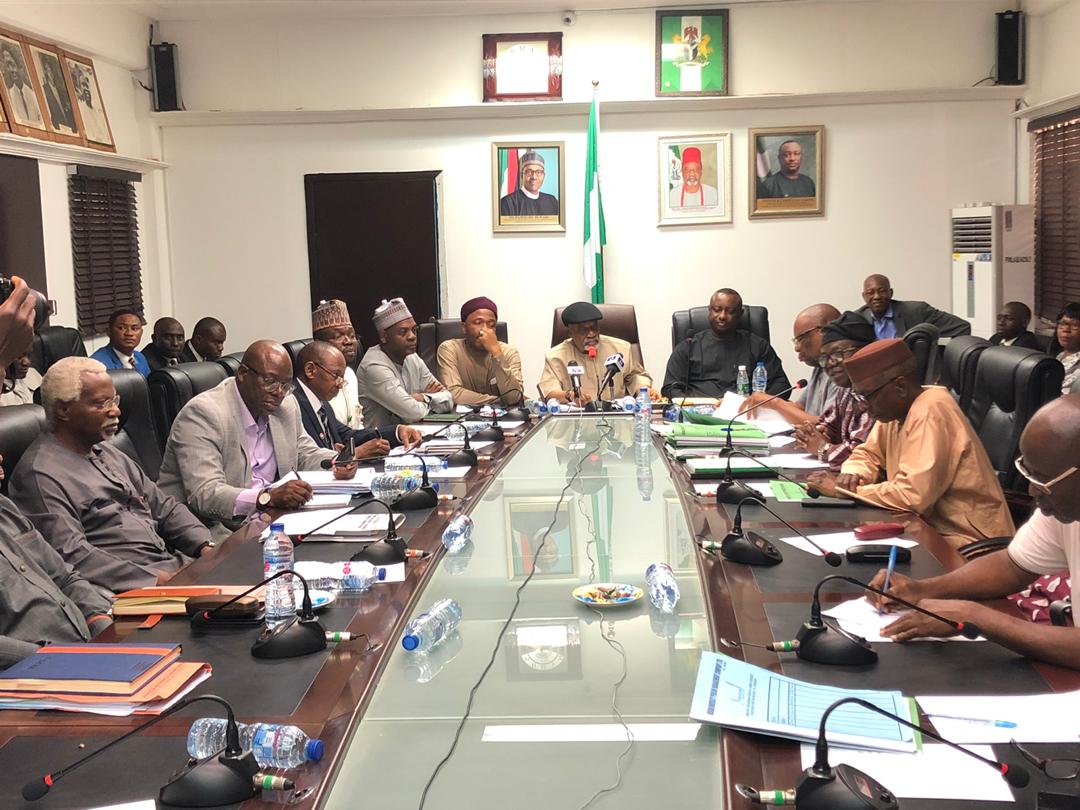 The Academic Staff Union of Nigerian Universities (ASUU) has “conditionally” suspended its nine-month-old strike with a vow to continue if the federal government fails to redeem the pledges it made.

But while ASUU had raised the expectations of  millions of Nigerians, the non-academic staff of the universities on Wednesday said they were not comfortable with the sharing formula of the about N40bn Earned Allowances (EA) the federal government was about to release.

Experts observed that in the event the non-academic members of the university community decide to go on strike, they would make the agreement between ASUU and the government a wasted effort.

ASUU had since the return of democracy in 1999 expended four years on strike, an equivalent of one term for an elected president or governor.

Under the administration of President Muhammadu Buhari, the union had ‘wasted’ 58 weeks on strike, meaning they had been at home for about 15 months.

Parents and students who expressed joy over yesterday’s development called on ASUU and the federal government to respect the terms of the agreement that led to the suspension of the strike to avert another round of strike.

They said any strike in the foreseeable future would spell doom not only to the students but the system, insisting that while the children of the rich have been moved abroad to continue with their education, those of the downtrodden remained frustrated doing nothing at home.

President of the Union, Prof. Biodun Ogunyemi, who announced the suspension of the strike at a press briefing, which held at the University of Abuja main Campus, said the lecturers sympathised with students who were also, their children, noting that “no amount of sacrifice would be too much to get the matter resolved as long as the government is consistent with its commitments.”

He, nonetheless,  reiterated the contentious issues that led to the latest protracted strike, most of which arose from the 2009 FGN-ASUU Agreement in respect to funding for revitalisation of public universities, Earned Academic Allowance (EAA), Salary Shortfall, state universities, visitation panels, reconstitution of the government renegotiating team and the Integrated Payroll and Personnel Information System (IPPIS).

He maintained that the union would not succumb to any pressure that could distract it from achieving its objectives, saying the federal government should reverse the decay in the Nigerian university system, in order to reposition it for greater responsibilities in national development.

According to him, the government must reverse the brain drain, not only by enhancing the remuneration of academic staff, but also by disengaging them from the encumbrances of a unified civil service wage structure.

The union leader, who argued that ASUU objectives were captured and made more potent by the findings of the federal government committee on the Needs Assessment of Nigerian Universities in 2012, added that it must ensure genuine university autonomy and academic freedom.

The agreements reached between the government and ASUU on Tuesday imposed some obligations on both sides.

It was agreed that the federal government would release N40 billion as the Earned Allowance and N30bn for the revitalisation of the university system bringing the total payment to N70 billion on or before Jan. 15.

It was agreed that the government would fast-track test processes and ensure the deployment of UTAS for the payment of salaries in the university system as an alternative to the controversial Integrated Payroll and Personnel Information System (IPPIS).

As agreed, varsity teachers would be paid their salary arrears via old GIFMIS platform pending completion of UTAS testing processes.

On the part of ASUU, it was agreed that the varsity teachers go back to their respective classrooms, laboratories among others, to do their best for students and the country.

ASUU leadership agreed to rekindle the motivation and aspirations in its members to strive to encourage students to excel, all in the expectation that governments both federal and state will sincerely fulfil their own part of the bargain.

It was also agreed that no ASUU member would suffer any loss of deserved benefits as a result of participation in the strike.

ASUU clarified that its members only suspended the strike, saying it had not called it off, pending when the government would respond “positively” to the agreements reached.

ASUU vowed that it would direct its members to down tools again if those agreements were not met.

Non-teaching staff in Nigerian universities, yesterday, warned the federal government not to create another round of problems in the institutions with the alleged imbalance in the sharing formula of the about N40bn Earned Allowances (EA) it is about to release.

This warning was given by the three unions – Senior Staff Association of Nigeria Universities (SSANU), Non-Academic Staff Union of Educational and Associated Institutions (NASU) and the National Association of Academic Technologists (NAAT).

The workers, who vowed not to go back to their respective duty posts until the government corrected the imbalance, alleged that ASUU got about 75 per cent of the Earned Allowances, leaving 25 per cent for the other three unions.

Daily Trust reports that part of the agreements the government reached with ASUU at Tuesday’s meeting was to release N40 billion as the Earned Allowance and N30bn for the revitalisation of the university system bringing the total payment to N70 billion.

Reacting to the sharing formula of the N40bn, the President of NAAT, Comrade Ibeji Nwokoma said anyone thinking that the non-teaching staff unions in the universities would resume with the recent development was day-dreaming except the government corrected the imbalance.

He said the union was making frantic efforts to reach out of the directors and permanent secretaries, ministries of education and labour and employment to draw their attention to the brewing crisis.

Also speaking, the President of SSANU, Comrade Mohammed Haruna Ibrahim said it appeared the government does not want peace in the university systems, insisting that his union would not take the lopsided sharing formula.

He stated, “Honestly, I believe that this remains a rumour even though I know it could be true. I have seen 75 per cent and 25 per cent. But truly if it is that, we have stated in no uncertain terms that we will not take this kind of lopsided allocations again because what is the scientific measurement used to give this money?

“We have stated before now that the least we can take is 50-50, they are not more in numbers. And even if they want to do something like that, maybe this is my own personal opinion, I may not insist on 50-50 but at least something reasonable. We have so many numbers.

“If they give for example 60-40, do you think the noise will be there? Government does not want peace if it is giving 75 per cent to only one union and giving 25 per cent to three unions, does it make sense?”

An educationist, Mrs Bola Olufowobi, has observed that Nigeria stands the risk of transiting from producing half-baked graduates to “one-quarter-baked” graduates.

Speaking with Daily Trust on the frequent ASUU strikes, the retired principal lamented that the whole educational system had turned upside down with the recurring strikes.

She said, “Definitely the students cannot read at home. When they return to school, the lecturers will definitely not start from scratch. So, we just end up having one-quarter baked students.”

The educationist, therefore, called on the National University Commission (NUC) to work towards restructuring the whole university system.

She urged the government to meet the demands of the lecturers to prevent a situation where most of them would move out of the country as being witnessed in the health sector.

“When the educational system is down, the whole nation is doomed. Our lecturers deserve the best treatment,” Olufowobi said.

On his part, the Assistant Vice-Chancellor, University of West England, Bristol, United Kingdom, Professor Lukman Oyedele, urged the federal government to hands off the running of federal universities by giving them autonomy as a solution to incessant strikes by the ASUU.

He stated this at the Prince Tunde Ponnle Annual Lecture Series organised by the Global Affairs and Sustainable Development Institute (GASDI) of Osun State University, Osogbo.

“Universities should be fully autonomous, generate money and run without depending on the government for funding. Vice-chancellors should see themselves as chief executive officers and manage universities as a business,” he said.

A former  Vice-Chancellor  of the University of Ibadan, who was also a former Minister of Health, Professor Isaq Adewole, buttressed the guest speaker’s position, urging the federal government to start with the six first-generation universities.

He warned the federal government against paying lecturers for the nine months that they did not work, saying that would encourage more strikes in the future.

“Government has no business in education. When the government is busy thinking of how to defeat Boko Haram, you want the same government to deal with issues affecting universities across the country. It won’t work. Let the government hands-off the running of universities, give them autonomy and allow them to run and survive independently,” he said.

The Pro-Chancellor of Uniosun, Malam Yusuf Ali (SAN), said the university had adopted a ‘no work, no pay’ policy since 2018. He said Uniosun is autonomous and that the state government had never interfered in its affairs.

A senior academic staff of a university, who do not want to be mentioned, described the two parties, the federal government and ASUU as culprits, saying they were both at fault.

He disclosed that ASUU once had a one on one meeting with the president and that it would have been a golden opportunity to solve the problem.

Dr Mataimaki Tom Maiyashi, an educationist who served as commissioner of home affairs, information and culture and well as commissioner of education in Kaduna State, said unless the federal government carried out a holistic review of the education system, incessant strikes will be the least of its problem as Nigeria will produce graduates who would come out as kidnappers.

Dr. Maiyashi told Daily Trust that even though the problems between ASUU and the federal government preceded the current administration, the issues were allowed to fester for too long.

“The federal government needs to look into tertiary education. Government should stop playing politics or infusing politics into the university system.

“The quality of teaching and learning in the universities has deteriorated, even postgraduates, many of them cannot write a good memo. These universities are the citadels where we are supposed to be producing high-quality manpower that will man all the sectors of the Nigerian economy. If the people who go through this system turn out to be substandard, then Nigeria is in trouble,” he said.

Sadiq Jayeola, a level 3 student at Federal University, Dutsinma, Katsina State, said he was at first happy when informed of the suspension of the strike but seeing it was tagged “conditional”, he reacted differently.

“It is really bad that our resumption is based on certain conditions. That means we are resuming with fear and uncertainty that another strike would take place,” he said.

Fatima Abubakar said though her plans for the future might have been truncated with the nine months addition to the years she supposed to be in school, she was still hopeful of attaining her goals after school.

She, however, pleaded with the government to meet the demands of the lecturers to avoid another round of strikes.

Khadija Abdulsalam who has two children in the university lamented on the number of years they would spend before completing their degrees, saying there was no need for endless strikes.