Students from the University of Benin (UNIBEN) and Ambrose Alli University, Ekpoma, on Wednesday, staged a protest in Benin over the 79 day-old industrial action… 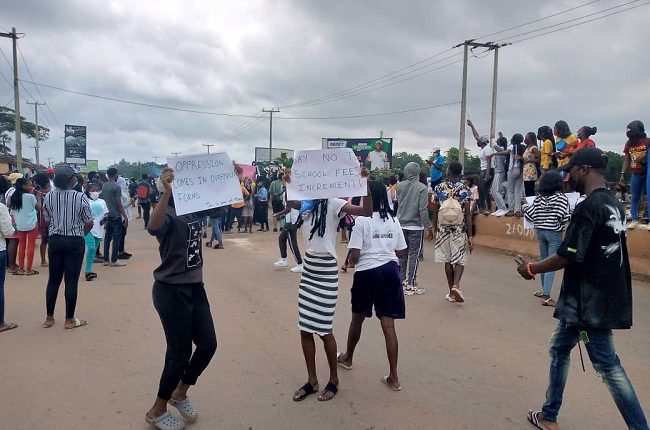 Students from the University of Benin (UNIBEN) and Ambrose Alli University, Ekpoma, on Wednesday, staged a protest in Benin over the 79 day-old industrial action by the Academic Staff Union of Universities (ASUU).

The students urged the federal government to resolve the impasse with the academic union in order to return to class.

The protesting students in their number barricaded the Oba Ovonramwen Square, popularly known as Ring Road, thereby causing gridlock in the heart of Benin City.

They were chanting solidarity songs with a message that they were tired of staying at home as the over two-month-old strike had caused a disruption to their academic calendar and affected their plans.

Speaking on behalf of the students, Foster Amadin, President of the Students Union Government, UNIBEN, said the industrial crisis was suffocating the dreams of Nigerian students.

This, he said, portends insensitivity as governments at all levels were going about their electoral processes while the striking lecturers engage in their individual businesses.

“We just want to express our grievances as regards the ongoing ASUU strike because we have stayed at home for over 79 days.

“The truth is, we are not for ASUU neither are we fighting for or against anybody, all we know, and all we want is to go back to our classes.

“We don’t want to stay at home any longer. We are being stagnated academically.

“All we want and all we are asking for is that we want to go back to our classes, we want to learn and graduate.

“Most people are already running 30 years, and when they are already 30, they cannot get a good job, they can’t even serve and when you are asking for a job, they will tell you to bring your service call up letter,” the SUG president said.

Idiahi Thomas, an official of the National Association of Nigerian Students (NANS), lamented that the education system in Nigeria had collapsed due to alleged neglect by authorities.

“Our leaders have bastardised it, and, as it is, Nigerian students are at home.

“The government is busy purchasing forms for over a hundred million nairas; an amount presidents of other countries cannot earn constitutionally throughout his own tenure,” said the students union leader. (NAN)