Sadly however, the place is in a terrible state, and only few persons in the community are seen taking bath in the water which flows… 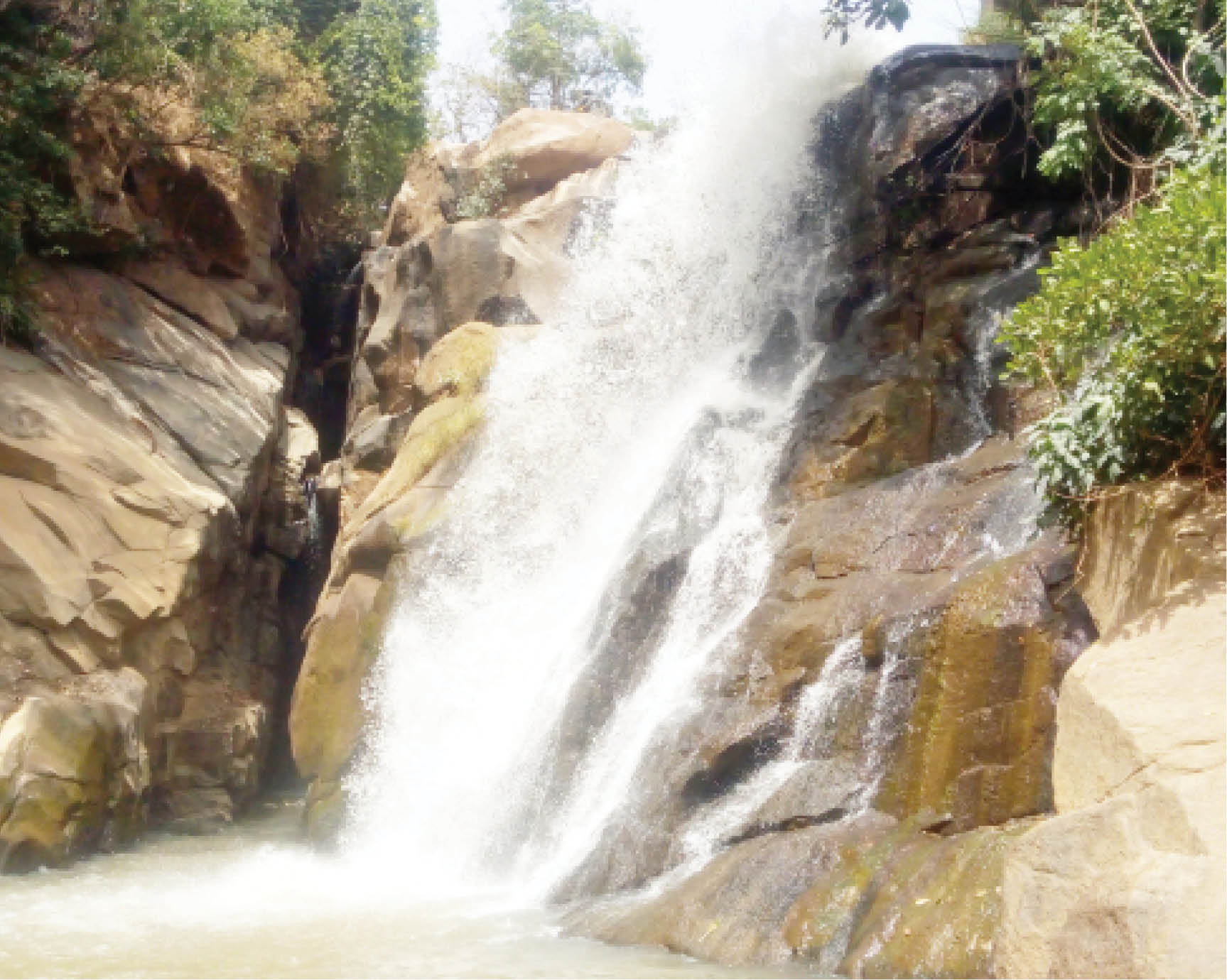 From its broken down sign post at the entrance, it is evident that all is not well with the Assop Waterfalls in Hawan Kibo, Riyom Local Government Area of Plateau State. The highway along the waterfalls, which is about 70 km from Jos, the state capital, has also been taken over by trucks and other heavy duty cars, thereby causing heavy traffic/road blockade and frequent accidents which lead to loss of lives.

Interestingly, the waterfall is a special place and a beauty to behold with huge tourism potential. The waterfalls is surrounded by rocks of different formation and a natural forest gallery that makes its outlook awesome. The water also feeds the natural vegetation of grasslands which extends into the gallery forests.

Sadly however, the place is in a terrible state, and only few persons in the community are seen taking bath in the water which flows to the rock and then flows down the rock eventually. Other nearby persons are seen lolling in the water or lying at the water bank, while some were washing their clothes. Again, some water vendors were seen coming in to fetch the water from the stream and selling to people outside. But it is only few fun seekers that trickle in and go round to catch the beautiful sight of the place and picnicking generally.

Our correspondent who visited the place was first greeted at the entrance by a horrible sight of a ghastly more accident involving in small car and a heavy duty truck. It was learnt that the accident happened a day before our correspondent visited and about five persons lost their lives in the accident.

There were also trucks/trailers parked indiscriminately along either side of the road, which are hampering smooth vehicular movement. That was the cause of the aforementioned accident, as well as the main causes of road crash on that highway.

Then upon entrance, the sight was a mixed grill; a beautiful natural environment but with decay facility. Broken down props were spotted, and there were also unkempt buildings with faded paints and unattractive furnishings. Besides, the attendant side attraction of such place, like splendid eating/games sports, among others, could not be seen.

This is a contrast to Plateau State’s slogan as ‘The Home of Peace and Tourism’. And a fundamental aspect of the tourism is the splendid waterfalls across parts of the state, where people are expected to come from far and near to hang out, relax and have fun. And with the natural formations of rocks, hills, waterfalls and other kinds of splendid scenery, Plateau makes it undoubtedly a place for tourism.

Yet, a notable waterfall among the rest on the Plateau is the Assop waterfalls (under discourse) which lay in ruins. Among other kinds of potential of the waterfalls is that it provides a serene site for shooting films, location for music videos, advertisements, pre-wedding pictures, wedding receptions and social or corporate occasions, festivals, school excursions, etc.

The sound of the water gushing from the rock into the valley and forming a mini pool before flowing in a stream-like manner is a delightful sight and sound which makes the place suitable for any kind of programme/meeting. Even the sound of different birds churning out pleasant melodies often fills the morning, afternoon or evening atmosphere with excitement. Undoubtedly, Assop Waterfalls is a natural waterfall in every consideration.

Information gathered by our correspondent which is also attributed to its poor state and its operation below its actual operational capacity is the level of insecurity in the area and particularly the acts of criminality perpetrated by hoodlums.

Kidnapping, robbery and all manners of attack/violence and other nefarious activities often occur along the road, especially a steep climb which always forces cars to slow down, thereby giving the attackers the opportunity to pounce on motorists and unsuspecting passengers alike.

Surprisingly, some persons are of the belief that all the unfortunate occurrences along that road which also take toll on the waterfalls are not unconnected to the orchestration of evil/spiritual forces. Those who believe in this school of thought said the atrocities, accidents and the lack of proper functioning of the waterfalls despite its huge potential are indicative of the evil forces orchestration.

Regardless of whatever the reason(s) for the poor functioning of the waterfalls, the workers said the impact of everything is more on them than on anyone else as they directly bear the brunt. They explained that for about 11 months now, they have not been paid their salaries and it has made it very difficult for them to take care of themselves and their families.

One of the workers (name withheld), discarded the ‘evil forces’ belief affecting the place or the highway, saying that he does not believe in that. He blamed the road mishaps on the state of the bad road and the notorious attitude of the drivers, especially heavy duty trucks.

He said some of the cars plying the road are not road worthy, while others do not even have good brakes. As a result, he said, accidents occur almost on a daily basis on the road, leading to increasing loss of lives.

According to him, he is hopeful that the government will soon give the place the expected attention and things would pick up for good.

The worker said there are so many facilities required by the place like lodging accommodation, which is critical to a tourism site. He added that if the government would endeavour to repair the waterfalls as well as the roads, the area generally will open up and become lively.

He said if the government can begin by clearing the cars off the roads, and then fixing the necessary facilities at the waterfalls, it will generate a lot of income.

The staff explained that there was a time the place was leased out to tourism private firm and things picked up tremendously. According to him, the company fixed so many things there including lightening up the whole place, which added to the beauty of the waterfalls at night as the lights shone on it. He said there are also fishes in the water and people take delight in seeing them swim around.

He said but immediately the government took the place back, everything went down, and that even the N100 (one hundred Naira) paid per person and N50 (fifty Naira) per child could do little or nothing to fix the place and bring it to the expected standard.

He lamented that as a casual worker, they are not being cared for and that they have not received their salaries. He said they sometimes owe them for more than a year without payment, thereby forcing many people to quit the work, and that they have tried all they could to get paid their backlog of salary but all to no avail.

He called on the government to intervene in the issue of salary so that their suffering would be ameliorated and they can at least assist themselves and family members.

Meanwhile, a fun seeker who came in the company of her parents and other siblings, Esimet Okunrotifa, said it was her first time of coming there and that she has never seen anything like that before.

According to her, the rocks and the waterfalls were just an amazing sight, and that with such places in Nigeria, one would wonder why people leave the country to go for tourism abroad.

She said she looked forward to coming back again, and called on the government to endeavour to put the place in order because people from across the country and even from outside the country would love to come around for tourism and catching of fun.

Calls and text messages put to the state Commissioner for Tourism and Culture Tamwakat Weli, for her reaction was not responded to.