By Ismail Mudashir (Abuja), Clement A. Oloyede (Kano) & Abdullateef Aliyu (Lagos) Seventeen days to the commencement of campaigns for the 2023 elections, the pendulum… 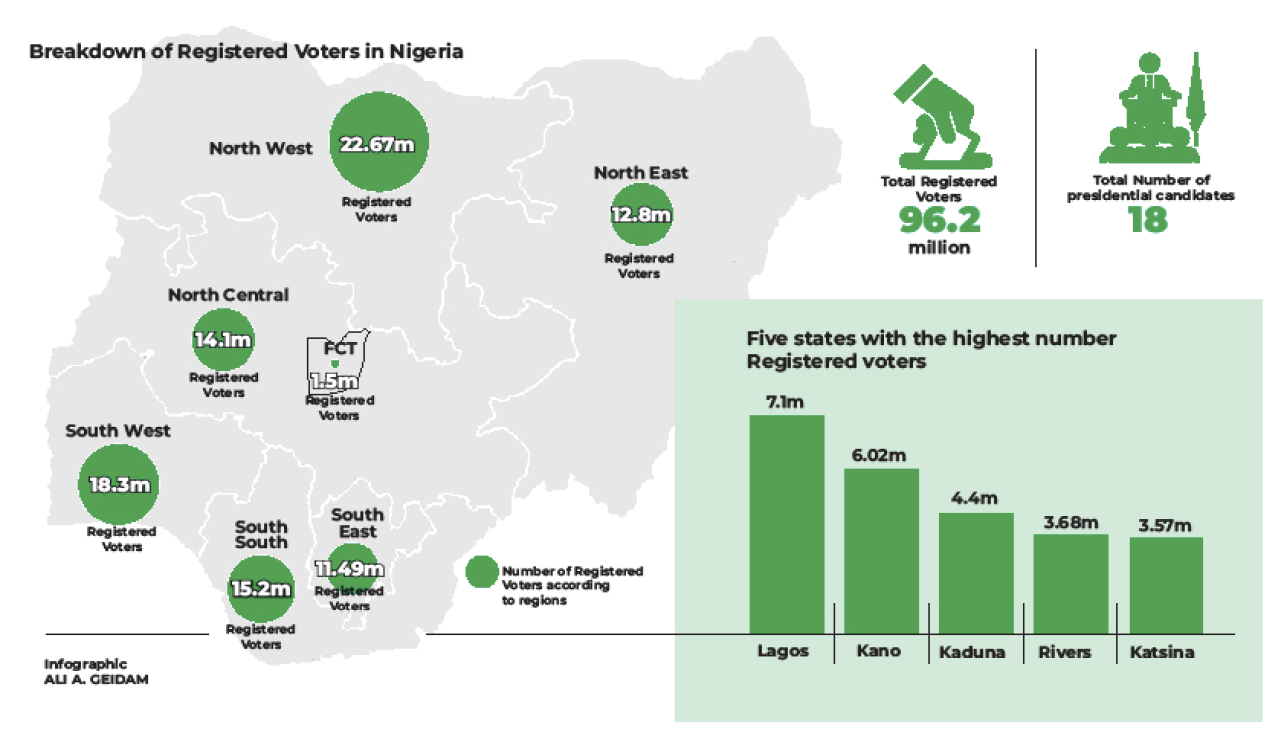 Seventeen days to the commencement of campaigns for the 2023 elections, the pendulum is swinging toward four of the 18 presidential candidates, analysis by this paper has revealed.

The Independent National Electoral Commission (INEC) had fixed the presidential and National Assembly elections for February 25, 2023.

Flag bearers and their running mates have been nominated by political parties. The electoral body would on September 20 publish the final list of candidates for both presidential and National Assembly elections.

With 167 days to go, alignment, scheming and consultations are ongoing by the candidates and their political parties to position themselves for the elections.

Ahead of the commencement of the campaign proper, the candidates are moving around the country consulting with various stakeholders. The latest statistics released by the electoral body on August 2 this year showed that the number of registered voters stands at 96.2million.

All the presidential candidates will slug it out for the 96.2m voters to succeed President Muhammadu Buhari, who is completing his second and final term on May 29, 2023.

Analysis of the strengths and weaknesses of the 18 candidates with regards to their popularity, acceptability, antecedents, political parties and supporters base, revealed that the successor of President Buhari will be either Atiku Abubakar, Peoples Democratic Party (PDP); Bola Ahmed Tinubu, All Progressives Congress, APC; Rabiu Musa Kwankwaso, New Nigeria Peoples Party (NNPP) or Peter Obi, Labour Party (LP).

Following the North West is the South West, which has 18.3m voters. The zone, comprising Lagos, Ogun, Osun, Oyo, Ekiti and Ondo, had 16.29m registered voters during the 2019 general elections.

In the third position is the South South – Akwa Ibom, Rivers, Cross River, Bayelsa, Edo and Delta states. The number of registered voters in the zone has risen from 12.8m to 15.2m.

The South East, which is the smallest geopolitical zone and consists of five states – Ebonyi, Enugu, Abia, Anambra and Imo – has 11.49m voters. The Federal Capital Territory has 1.5m voters.

Tinubu, 70, a former governor of Lagos State, is leaving no stone unturned in his quest to actualise his life-long ambition to lead the country. He clinched the ticket of the APC against the wishes of the party’s national chairman, Senator Abdullahi Adamu and a section of the presidency.

With the power of incumbency at the national level and 22 governors in the ruling party, promoters of Tinubu’s candidature believe that come February 25, the Jagaban Borgu would have his way to the presidency.

However, the selection of a former governor of Borno State, Senator Kashim Shettima, as his running mate, has been generating mixed reactions in the polity.

From within, the former Secretary to the Government of the Federation, Babachir David Lawal and a former Speaker of the House of Representatives, Yakubu Dogara, are leading an onslaught against the Tinubu project in the North over the Muslim-Muslim ticket.

There are also reports that a section of the presidency that promoted the candidature of Senate President Ahmad Lawan during the APC primary has not keyed into Tinubu’s project. Though the presidency issued a statement that Buhari will only support the candidates of the APC, some loyalists of Atiku said they had the support of some people around the president.

Both within and outside the APC, the issue of Tinubu’s health is being used against him.

Former Vice President Atiku Abubakar, 75, is contesting the presidency for the sixth time with his latest outing. Atiku, who hails from Adamawa in the North East geopolitical zone, had contested for the same position in 1993, 2007, 2011, 2015 and 2019 under different political platforms.

After eight years of being out of power, the PDP is banking on what they considered the abysmal performance of the APC government in the areas of insecurity and the economy to return to power.  For 16 years, from 1999 to 2015, the party held sway in the country.

While those around the Wazirin Adamawa believe that his candidature resonates across the six geopolitical zones, members of the PDP from the South are of the view that his emergence as the candidate of the party was to perpetuate the presidency in the North.

Analysts believe that the feud between Atiku’s camp and that of the Rivers State governor, Nyesom Wike, may affect the fortunes of the party in the coming elections if not settled.

Feelers in the party said that Wike, who came second in the presidential primary is perfecting plans to work with the candidate of the Labour Party, barring any last minute change of the game.

It is also believed that Obi would encroach into the base of the PDP, namely South East, South-South and North Central geopolitical zones. Already, stakeholders in the areas are joining forces ahead of the polls. Obi had intensified campaigns in churches and the social media.

Obi, 62, was a governor of Anambra State under the All Progressives Grand Alliance (APGA). His popularity recently ballooned, especially among the youth and aggrieved members of the PDP, who believe that the emergence of Atiku as the candidate of the party was to alienate the southern part of the country.

Pundits believe that Obi, who was the running mate of Atiku in 2019, would have to do more to penetrate other parts of the country.

Kwankwaso, 65, founded the Kwankwasiyya movement during his second term in Kano State between 2011 and 2015. His cult-like movement, ‘the red cap revolution,’ has penetrated many states in the country.

The former governor of Kano State first indicated interest in the presidency in 2014 when he contested for the presidential primary of the APC in Lagos State. He came second after President Muhammadu Buhari.

His defection from the PDP to the NNPP in March changed the equation in the race to the State House, Abuja. Pundits, however, believe that he needs to do more in coming days for him to make the needed impact come 2023.

Assessing the chances of the three candidates, a renowned political scientist and analyst, Professor Kamilu Sani Fage, said the battle was between Atiku and Tinubu.

Fage, who is of the Department of Political Science, Bayero University, Kano (BUK),  observed that all four leading political parties going into the election have a similar challenge as none of them has a political leader with strong appeal beyond his zone.

On Tinubu, Fage noted that the party has the advantage of being the ruling party and having majority of the states, National Assembly and state assemblies, which will give it the power of incumbency.

He, however, noted that the greatest challenge of the party is the Muslim-Muslim ticket it adopted.

“If you take this issue and analyse you would see that the party has challenges in five out of the six political zones,” he said, explaining further that since the candidate is from the South West, he will most likely have their support, while in the North West, despite the strong presence of the party in the zone, the challenge brought about by the insecurity and banditry in the zone might work against him, as well as the fact that the NNPP has its candidate from the zone.

For Atiku and the PDP, Fage observed that although the party remains the major opposition, it is unfortunate that since they lost power, they have not been able to put their house in order and now also have the Governor Wike problem, which is threatening one of the party’s strongholds, the South-South.

He also noted that the South East that naturally belongs to the party is also not fully in the bag with the emergence of Obi “because southeasterners feel they have been long excluded from the political processes in Nigeria and will feel this (Obi) is their chance.”

On the NNPP and Kwankwaso, Prof Fage said the party had similar challenges to the Labour Party in that it is also only strong in few states in the North West and does not have a structure across the country.

Also, a political scientist, Prof Gbade Ojo, in a chat with one of our correspondents, corroborated Fage’s position, saying the race could be narrowed to Tinubu and Atiku.

“In politics, most especially when it comes to elections, 24 hours is a very long journey. However, for now, before the commencement of the campaign, we can identify four leading presidential aspirants.

“While there are so many of them out there, the four leading ones are Tinubu, Atiku, Peter Obi and Kwankwaso.

“The issue is that there are dynamics that will determine who will win. Tinubu started badly with the Muslim-Muslim ticket.

“Atiku should have been a strong candidate but the PDP is enmeshed in internal crisis because of the inability to recognise the dynamics of this country – both the party chairman and presidential candidate should not have been from the North.

“Peter Obi, who is making waves among the youth, does not have any structure. Obi could have been a better vice presidential candidate in one of the leading political parties.

“Kwankwaso is popular in his Kano environs. He is popular on the pages of newspapers as a former governor of Kano State, but in terms of building a party that has structure, he has not been able to give Nigeria a third force” he said.