President Muhammadu Buhari launched 13 rice pyramids in Abuja in January, 2022, in a ceremony that received international media attention and elevated Nigeria to the… 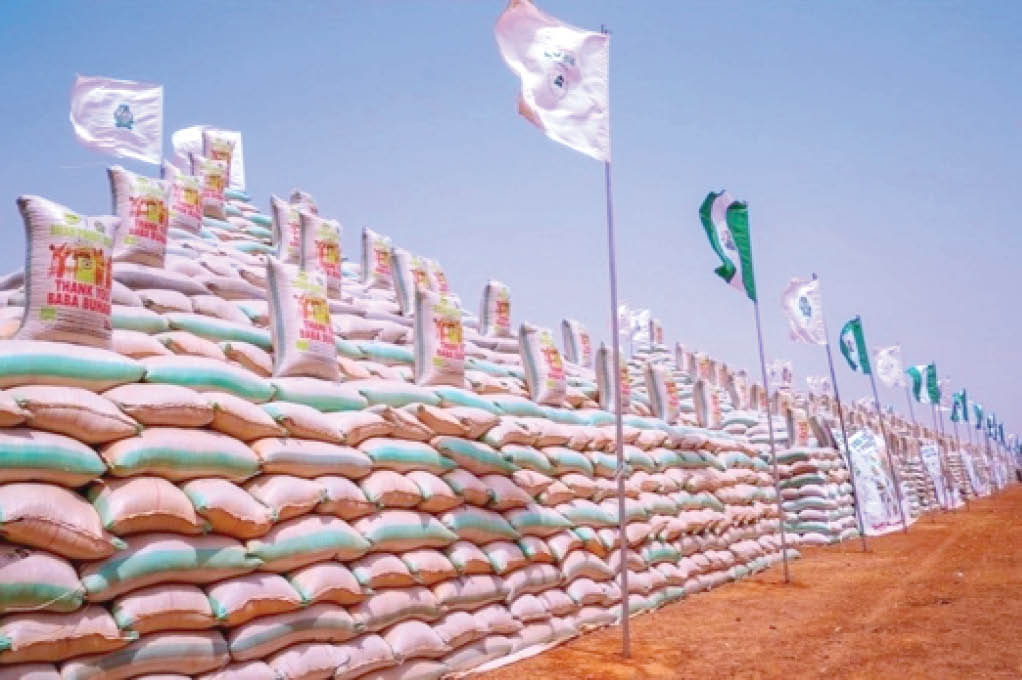 President Muhammadu Buhari launched 13 rice pyramids in Abuja in January, 2022, in a ceremony that received international media attention and elevated Nigeria to the position of top rice producer in Africa.

The launch was to showcase the successes of the Central Bank of Nigeria’s (CBN’s) Anchor Borrower Programme (ABP) driven by the Rice Farmers Association of Nigeria (RIFAN) and to announce a crash in the price of the crop.

However, one year after the debut, the price of rice increased to N40,000 per 50kg in December, 2022, up from N26,000 before the fiesta, leaving Nigerians wondering if the event was stage-managed to make the president believe the billions of naira put into the production were worth it.

Prior to 2015, about N600bn worth of rice was imported each year to close the demand-supply mismatch for milled rice.

With only six operational integrated rice mills and a national paddy output of roughly 4.5 million metric tonnes at the time, the Nigerian rice business was unattractive to both farmers and millers because imported rice predominated the Nigerian market.

However, a game-changing scheme, the ABP, was launched in November, 2015, starting with the financing of smallholder farmers of rice and wheat.

Through the provision of inputs in kind, biometric identification of farms and farmers, extension services, secured markets through well-established offtake contracts and additional connections to the agro-processors to ensure the transmission of the benefits from primary production to other nodes of the value chain, ABP created a dynamic ecosystem among all stakeholders.

As at February, 2022, the CBN had disbursed N975.61bn to 4.52 million smallholder farmers across the country under ABP.

Productivity per hectare increased to an average of four to five metric tonnes, integrated rice mills grew astronomically to over 50 in 2021 and national output to over nine million metric tonnes.

For many Nigerians, the billions of naira did not translate to cheap rice; instead, they are spending more to eat rice.

“Finding cheap rice is a worry for me as a customer. I don’t understand why the government would claim that after spending billions on rice cultivation we cannot afford it,” said Mr Akin Tunde in Abuja.

For two seasons now the ABP has stopped due to bad loans and as Buhari exits in the next four months stakeholders fear the success may be reversed.

Rice production in W/Africa grew by 44%

Dr Boladale Adebowale, the Executive Secretary of the ECOWAS Rice Observatory, speaking recently in Abuja, stated that in the 14 of the ECOWAS member states rice played a very important and increasing socio-economic role.

She said the consumption of rice had experienced an exponential demand growth since the second-half of the 70s due to an increasing population that was nearly doubling every 25 years.

“However, demand has not been met from local production, no matter how much we try to shy away from that. The region has relied on importation from Asia to meet this shortfall. In 2020 alone as I mentioned earlier, over eight million tons of milled rice was imported by West Africa. And the bill was over $3.4bn. This did not only deplete the scarce foreign reserves that we have, but what it has done is to undermine the indigenous capabilities that we have in the production of rice and the development of the rice value chain as well.

“In West Africa, local production of rice covers only 62 per cent of current demand, and it is a fact. In Nigeria it covers only about 72 per cent. That is also a fact.”

Muhammed Ali Baba of RIFAN, during the launch of a rice policy in Abuja, said, “The greatest challenge we have had so far with the ABP is repayment. It is what has killed it.

“These past two seasons we didn’t have ABP because repayment was abysmal,” adding that the value chain players, especially those at the lower level, must be sensitised if such intervention must be sustained.

For some time now the CBN has been facing criticism over the huge amount (about N1trn) spent in the programme with rice still unaffordable.

Although the ABP recorded some successes in the sector, some stakeholders believe that most of the funds ended up in the hands of people who are not real farmers, adding that increased local production is due to import ban and border closure.

“A lot of people got rich through a number of interventions because of corruption in the system. Some people forced themselves to become leaders of some commodity associations just to tap into the funds. These people don’t have farms but because they know those who are in charge of administering these funds.

“That’s why output will never commensurate the amount claimed to have been spent on production,” Ali Barde, a farmer said.

Dr Fatima Aliyu, the focal person for rice at the Federal Ministry of Agriculture and Rural Development, while speaking on rice transformation in the country recently  said that by 2018, Nigeria had achieved 70 per cent self-sufficiency.

“No matter what people say, Nigeria has made gigantic progress in the production of rice in Africa. People don’t notice it because we have a very large population. But whatever the case, when our borders were closed, when there was a shutdown of everywhere during the COVID-19 pandemic, the exporters were not exporting, so there was nothing to import, but there was rice in Nigeria,” she said.

Governor Atiku Bagudu Abubakar of Kebbi State, who is the Vice Chairman of the National Food Security Council and also Chairman of the Presidential Task Force on Rice and Wheat, also believes a lot has been done.

He said, “We have done well, there’s no doubt about it, in the rice sector, the increase in production, the mobilization of private investments, the coming together of financiers,  scientists and  policy makers under the leadership of the Federal Ministry of Agriculture has  produced monumental results above 15 million tons.

“But that we have done well does not mean we cannot do better, and that again needs to be appreciated.  The goal of doubling rice production by 2030 to 30 million metric tons is even modest. And in terms of the fact that we have seen rapid increases in yield, we have seen revolution at the lowest level, meaning at the farmer level and most of our farming communities today, you find farmers transiting and willing to embrace agronomic practices, which in a while ago they were very reluctant to embrace. They are now willing to invest in seedling and or even appreciate the value of adequacy of inputs and so on and so forth.

“So this transformation is achieving a critical mass which we believe will bring to bear how easy it is for us to go to the next level in terms of achieving that 30 million tons. And it makes sense because the former known Western states which include Niger, Sokoto. Kebbi, Sokoto and Zamfara, have a landmass of about 149,000 square kilometres, slightly bigger than Bangladesh. Bangladesh is 147,000, but yet Bangladesh, even with 170 million people occupying that land, produces about 35 million metric tons of rice. So if we ask to support even one part of the country. We can see why the 30 million goal is not too ambitious. So it’s not out of a dream, especially given the fact that all the 36 states in Nigeria and FCT have potential for rice production.”

But with Buhari’s tenure coming to an end, CBN under search light and commercial banks’ interest rate going beyond smallholder farmers, the future is unpredictable.