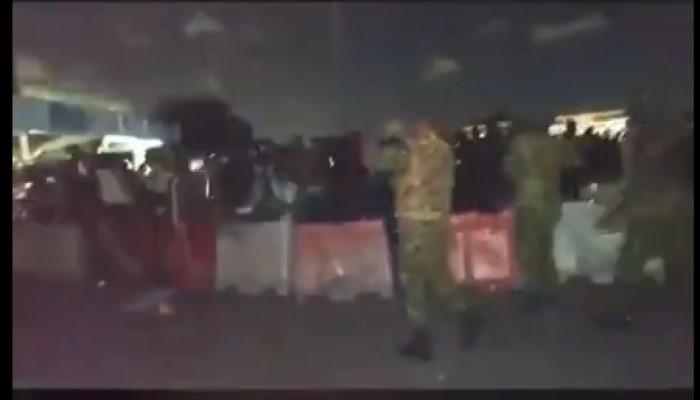 The Nigerian Army headquarters on Wednesday denied reports in various media outfits that soldiers were deployed to Lekki tollgate and opened fire on protesters Tuesday evening.

Here’s the clearest view I’ve seen thus far of some of the gunfire at Lekki Toll gate.

Though, the spokesperson of the army, Sagir Musa, is yet to issue official statement as at the time of filing this report, but the army labelled several reports linking soldiers at the tollgate as ‘fake news’ in a series of tweets on its official handle: @HQNigerianArmy.

The labels included: “No soldiers were at the scene”, “False and misleading”, “Fake news” among others.

Meanwhile, the military outfit has announced the arrest of Lance Corporal Harrison Friday who had gone on social media to advise his colleagues not to attack #EndSARS protesters.

Daily Trust recalls that in the video uploaded last week, the soldier, who was wearing a mask, had asked his colleagues to understand that the protesters were fighting for a better Nigeria and they must be supported by all Nigerians including the military.

Announcing his arrest on Wednesday, the army said in a separate tweet that the corporal had been arrested for cybercrime.

It tweeted, “The hooded soldier hiding behind the mask to commit cybercrimes has been apprehended in the ongoing cyber operations in support of crocodile smiles. Rest assured cybercriminals have no hiding place.”

Efforts to reach Col. Musa proved abortive as several calls made to his mobile depicted were not reachable.