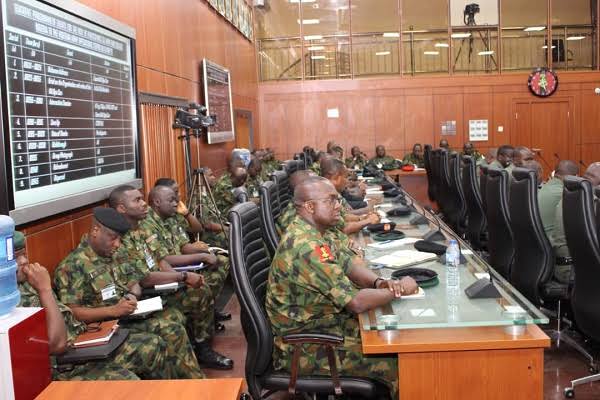 The Nigerian Army says all arrangements have been concluded to review its operational activities across all its theatres of operations in the six geo-political zones of the country.

Brig.-Gen. Onyema Nwachukwu, the spokesman of the army, disclosed this in Abuja on Thursday while briefing journalists on the activities lined up for the 2022 Chief of Army Staff annual conference to be held in Sokoto.

He said the Chief of Army Staff, Lt.-Gen. Faruk Yahaya and his team would comprehensively evaluate ongoing operational engagements to provide a safe environment ahead of next year.

According to him, this will provide the army an indepth insight to take far reaching decisions that will be result-oriented towards achieving its set objective of addressing the multifaceted security challenges in the country.

Nwachukwu added that said the conference with the theme: “Building a Professional Nigerian Army for the 21st Century Security Environment” would also offer an avenue for reappraisal of the administrative affairs of the Nigerian army.

He further noted that troops have continued to decimate Boko Haram/ISWAP terrorists in the North East, leading to the obliteration of terrorists’ high profile commanders, foot soldiers and their hideouts.

“This has led to mass surrendering of terrorists and their family members in droves. Troops have also maintained this through their operational engagements in other theatres of operations in other parts of the country, with significant successes recorded,” he added.

The Director, Defence Media Operations, Maj.-Gen. Musa Danmadami, disclosed this at a press briefing in Abuja.

He said they were nabbed at Daudawa village in Faskari Local Government Area of Katsina State on November 17 during a stop-and-search operation.

He also said the troops recovered a vehicle and five mobile phones from the suspects.

He said although investigation was still ongoing, the preliminary findings revealed that they were coming from Zaria and heading to Zamfara to deliver some cash to terrorists.

He said the troops also neutralised three bandits at Yambuki village in Zurmi Local Government Area of Zamfara on November 20, while others fled with gunshot wounds.