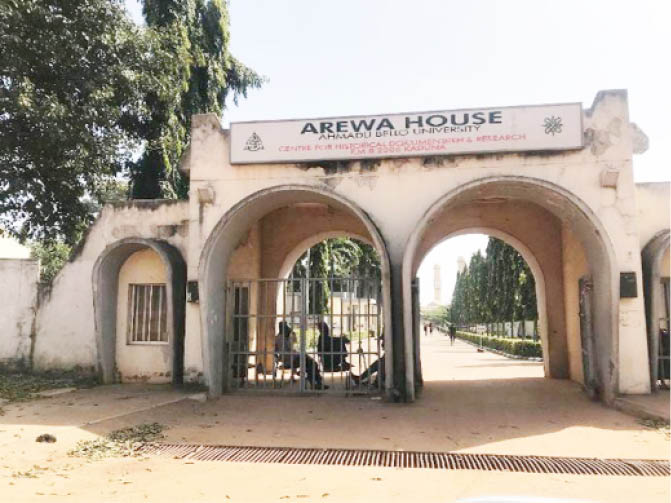 Arewa House is a research and documentation centre which focuses on the history of the northern region in particular and Nigeria in general.

Established in 1970 as a centre for historical documentation and research for northern Nigeria, the Arewa House, the official residence of northern Nigeria’s first and only premier, Sir Ahmadu Bello, the Sardauna of Sokoto, has come to symbolise the political power house of the North and a distinct representation of the region’s unity in diversity.

Daily Trust dissects the 50 years of the northern heritage.

For many Nigerians, the Arewa House, located on Rabah road in Kaduna State, is a symbol of northern Nigeria’s political power.

Called Gidan Arewa in Hausa, the structure itself commands respect. It was converted into a centre for historical documentation and research under the Ahmadu Bello University, Zaria.

Public records show that it was built sometime around 1950 but it became a centre for historical documentation and research in 1970, four years after the premier and other notable Nigerian leaders were assassinated in the January 15, 1966 coup.

According to the centre’s director, Dr Shuaibu Shehu Aliyu, the Arewa House came about following the recommendation of the Interim Common Service Agency (ICSA) to write the history of northern Nigeria, especially relating to the Nigerian civil war.

“The only surviving members of the committee are Mallam Adamu Fika and Waziri Fika,” said Dr Aliyu, who explained that the former governor of northeastern states, Col Musa Usman, later recommended for the transformation of the committee into a research centre and the official residence of the late premier, who was chosen to serve as the official office of the centre, “purposely to immortalise the legacies of the premier,” he said.

The Arewa House is made up of a museum, galleries, library, an archive, as well as an auditorium, restaurant and event halls. It has become the custodian of northern heritage with satellite galleries housing artefacts that portray the diverse and unique cultural heritage of each northern state.

The hidden treasures of northern Nigeria

In 1991, the Arewa House organised an appeal fund, in which about N125million was realised.

The fund, according to the director, was utilised for the expansion of the centre, giving birth to the museum complex to accommodate historical relics and conference facilities.

With its 19 satellite galleries and one central gallery, the Arewa House is a museum of immense treasure that keeps and protects the cultures and traditions of a range of features of northern Nigeria.

At the Museum complex, black and white pictures adorn the walls, showing the glaring achievements of the late premier.

Pictures range from milestones in the establishment of Hamdala Hotel in Kaduna and Arewa textile industries, to coffee farms in Mambila Plateau and the Central Bank of Nigeria (CBN) in Kano as well as the ginnery and sugar company in Kwara State.

Still within the central gallery, one comes face-to-face with the imposing and well preserved executive table of northern Nigeria’s first premier.

“The table is original and you can see some of the files he treated on it,” said Monday Galadima, the principal cultural officer of the Arewa House, who took Daily Trust correspondent round to see the historical artefacts.

Placed on the table is a picture frame of the premier sitting behind the same table in his office as while received foreign guests in 1960.

Official files marked secrets but now tattered around the ages and an automobile metal flag holder with the Nigerian flag, said to be presented to Sir Ahmadu Bello by King Hassan of Jordan, are also strategically placed on the table.

A large room with a conspicuous middle section, the central exhibition room is divided into three parts to categories of pre-colonial, colonial and post-colonial artefacts.

The various periods have a display of relics such as war armours, craft materials as well as the early development of currencies in Nigeria, such as cowries, hand-woven textiles called Langtang and currency bars used as means of exchange.

Other relics on display include colonial currencies, regalia, horse straddle as well as documents on politics and governance in pre-colonial northern Nigeria.

The middle section of the exhibition room has been dedicated to the hidden treasures of the Arewa House museum, which include some selected objects found in the museum’s stores during the re-organisation project nicknamed, RE-ORG.

According to Galadima, “RE-ORG is the reorganisation of Nigerian heritage, and in the course of doing that, some collections were found and have been named the hidden treasures of the Arewa House.”

What quickly captivates a visitor’s eyes among the treasures is a royal blue alkyabba (sleeveless over garment, usually worn by royals).

The Sardauna displayed in the middle of the gallery beside pages of old newspapers in various northern Nigerian, languages such as Tiv, Fulani, Igala, Idoma, Hausa and others.

According to the officials of the museum, the first section the Re-ORG collections showcases “memorabilia of political parties in the First Republic: flags, posters, logo sand manifestoes.

The second section exhumes a rare blue alkyabba of the late Sardauna, found in the recesses of the museum stores.

The last section brings out the rich technological heritage bodied in cotton spinning, weaving wood carving and other handcraft.

The last section provides insights into the various facets of life in the old northern Nigeria.

Each of the 19 northern states has a display of their unique cultural heritage in various satellite suites, even though some are more updated than others as evident in their rich collection.

Sardauna’s home as though he was alive

One of the most attractive features of the Arewa House is the late premier’s residence, which is now a house museum, with a display of his personal effects.

A left turn from the main gate of the centre will expose the white walls of the house, situated beside the Mable office, which served as the late premier’s office.

Inside the home, one gets a glimpse of the life he lived and how he lived within his personal space.

The house museum has an array of personal effects, including family pictures showing his wives, children, and other effects such as his wrist watches, praying mat, clothes and even the kettle he used in performing ablution.

The sitting room and bedrooms have been staged to replicate the premier’s abode in the 1960s. Some of the furniture, according to Monday Galadima, were replicated to depict the original version, but others were the originally used by Sardauna himself.

“He had three female children,” said Galadima, who spoke of the late premier’s family as though he personally knew their lives beyond the written stories.

Sardauna’s first wife, Hajiya Indo, died with him during the assassination.

Through years of exhibitions, the Arewa House has often showcased the rich cultural heritage and values of northern Nigeria and hopes to reinvent these values as it marks its 50th anniversary.

“As part of activities marking the anniversary, the centre will be exhibiting the personal items of the late premier, showing his life and times, including his living room and bedroom the way they were before his death 54 years ago.

“We are also embarking on oral documentation and would want the younger generation to come and listen to the life experiences of prominent individuals and personalities from all walks of life. This will help the younger generation greatly by inculcating in them the spirit of honesty, integrity, commitment and dedication against the culture of greed and indolence. It will inspire them to imbibe the culture of modesty and humility,” the centre’s director said.

50 years as a leading research centre

The idea behind the Arewa House as a centre of historical documentation and research was birthed after the History of Northern Nigeria Committee was given the task of writing a book on the history of the region from 1390/1970.

The document, according to Dr Aliyu, is preserved within the centre’s archives.

In 1994, the Arewa House instituted the Sardauna Memorial Annual lecture in honour of the premier, and has so far held 10 editions.

As part of its ability to promote national cohesion, the director said every year, the lecturers come from the North while the chairmen come from the South.

In spite of its achievements in the last 50 years, the Arewa House is challenged by the lack of statutory funding, forcing it to depend heavily on the goodwill of northern state governors and other eminent Nigerians.

“To undertake meaningful research, you need adequate funding. That is why we are appealing to the Federal Government and northern states government to consider the need to fund our research activities,” he said.

The centre’s prospects are bright as it hopes to construct a building that will accommodate a conservation laboratory, archives repository, oral documentation unit and a digital newspaper library.

“The library will be the first of its kind in Africa and the world at large. What we are praying is for the Federal Government, governors and philanthropists to assist the Arewa House in the provision of these facilities,” the director said.