The Arewa Community in Ondo State has decried the profiling of northern travellers by the Western Nigeria Security Network known as Amotekun. The Sarkin Hausawa… 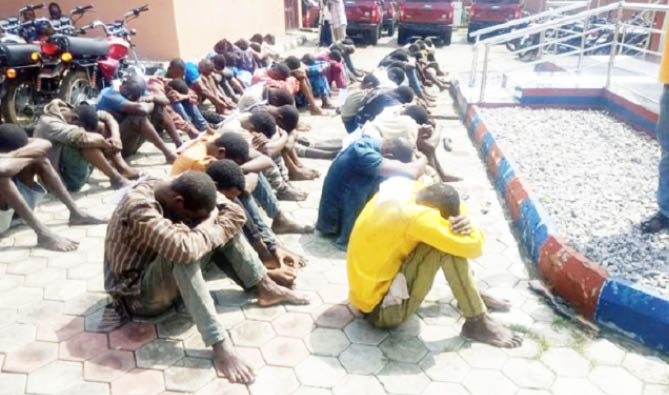 Intercepted travellers paraded by Amotekun in Akure on Tuesday

The Arewa Community in Ondo State has decried the profiling of northern travellers by the Western Nigeria Security Network known as Amotekun.

The Sarkin Hausawa of Sasa market in Ondo State Alhaji Ibrahim Shehu Abdullahi told Daily Trust on Sunday that members of the Arewa community are not happy with the way and manner their members are being treated by Amotekun and tagging them as ‘illegal migrants’ and ‘invaders’ even though they are Nigerians from various states of the North heading to different parts of the South for legitimate busiensses.

“We are not happy with the way and manner Amotekun and the media tag us in bad light. These people coming to the South West from the North are mainly labourers and those doing petty businesses as manucurists, hawking sugarcane, among others. As leaders of the Arewa Community, we informed the commander of Amotekun that these people are not criminals but no one is listening to us. Many of the northern youths are being kept in the correctional centres in Ondo State, while some are held as captives by Amotekun, and nobody cares. Even our leaders in government in the North don’t care about the situation, we have governors and senators who can easily contact their colleagues here but they will not,” he said.

Ibrahim Shehu, however, noted that in most cases the DSS found no wrong doing among the arrested northern travellers, hence they were released.

“So, Nigerians can no longer travel within Nigeria to make ends meet? Just as we have northerners coming to the South to seek for greener pastures, we also have southerners who travel to the North seeking greener pasture and they are doing well over there without harassment or intimidation, why is it different here,” he asked.

Security agents had earlier screened and documented 147 passengers travelling from Kaura Namoda, Zamafara State, who were intercepted by Amotekun on a truck in the Bodija area of Ibadan, Oyo State, on Tuesday. Police said the travellers were predominantly farmers and traders, even though there were speculations that the truck passengers were terrorists.

Police spokesman Adewale Osifeso, in a statement, said the truck and its passengers were later escorted out of the state and handed over to security personnel in Ogun.

Oyo Commissioner of Police Adebowale Williams warned against spreading what he described as falsehood and unverified information capable of creating unnecessary panic among residents.

The Amotekun on Friday said it had intercepted 151 invaders in Ondo State.

The State Commander of Amotekun, Akogun Adetunji Adeleye, said “We have not completed profiling them, as none of them had an idea of what they were going to do.

“All they were able to tell us is that they entered the vehicle and came to Ondo State. This is not a good sign, following the security warning in the South West states.”

“While respecting their rights as Nigerians, we are not sure of what they are here for; we still feel that while traveling, anyone should have a mission and destination of where he or she is going to,” the Amotekun Commander said.

Adam Bashir, a Kano-based legal practitioner told Daily Trust on Sunday that the arrest, profiling and parading of these Nigerians exercising their constitutional right of free movement is not only an abuse of the constitutional rights of the travellers, but illegal.

“To begin with, what law created Amotekum? Without any federal law creating it, that renders it unlawful assembly which is proscribed by criminal law of Southern Part of Nigeria because Section 214 of the Constitution Federal Republic of Nigeria prohibits the establishment of regional or State Police. As we all read in national dailies, Amotekun is a Southern Nigeria Security outfit created by governors from southern Nigeria. Where did these governors get such powers from?

“Again, referring to the innocent travellers as “illegal invaders” is not only defamatory but treasonous.

“These perpetrators are ignorant of the word ‘invader’ which means soldiers entering another country by force, particularly when the Amotekun spokesperson qualified what he meant by ‘illegal invaders’ by making reference to “Dangerous Charms and photographs of combat training”. Yet, he identified them as indigenes or resident of Kano, Katsina, Abuja and Jigawa.

“Is Amotekun creating another country of its own? This is treasonable because this and many actions of Amotekun are capable of undermining the interest of Nigeria as a united entity. The question remains; What law created Amotekun and saddled it with powers to conduct arrest, investigation, profiling and parading of any person whether suspected of committing an offense or not? Only men of the Nigeria Police force or military or paramilitary agencies have the powers to intercept, arrest, investigate and prosecute any suspect. Profiling a person as an ‘illegal invader’ is only a prerogative a a court of law.

On this premise, there is a need by the President and Commander-in-chief of the Armed Forces to call affected state governors to order, lest they may likely undermine the powers and supremacy of the constitution, unity and fragile peace of the country,” he said.