A gale of stepping down by aspirants has cleared the coast for a former Lagos State Governor, Asiwaju Bola Ahmed Tinubu, to clinch the ticket… 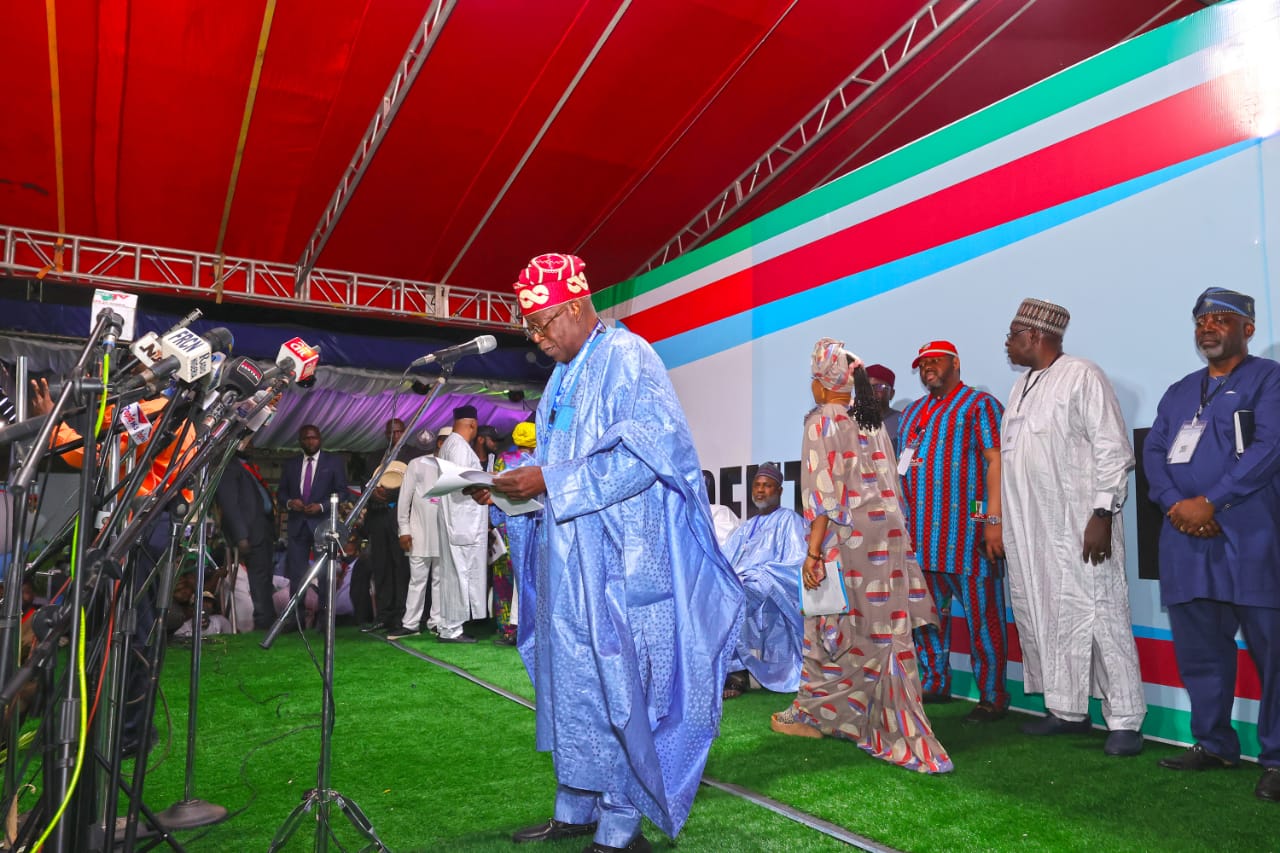 A gale of stepping down by aspirants has cleared the coast for a former Lagos State Governor, Asiwaju Bola Ahmed Tinubu, to clinch the ticket of the All Progressives Congress (APC) for the 2023 presidential election.

At the Eagle Square, Abuja venue of the party’s special convention and presidential primary, the national leader of the ruling party inched close to actualising his lifelong ambition, ending the intrigues that heralded the long-awaited event.

Setting the ball rolling for the stepping down galore was a former Akwa Ibom governor, Senator Godswill Akpabio, who pulled out of the race for Tinubu at 10:06pm.

It was after Akpabio that a former governor of Ogun State, Ibikunle Amosun, Governor Kayode Fayemi (Ekiti), former Speaker of the House of Representatives, Dimeji Bankole, Governor Abubakar Badaru (Jigawa), Senator Robert A. Boroffice and a female aspirant, Uju Ken-Ohanenye, also stepped down for Tinubu.

In all, seven aspirants, who picked the party’s tickets for N100 million each, stepped down for the former Lagos State governor. The event slated to commence at 3.30 pm, started four hours late at 7.30pm.

Forty-year-old aspirant, Felix Nicholas, said to be the youngest in the race, stepped down for Osinbajo.

It was observed that Osinbajo was booed by delegates from Lagos State and supporters of Tinubu. The incident happened when the vice president walked toward the delegates’ area to greet them upon his arrival at the venue.

The development forced Osinbajo to change his route to the VIP area, where he was waved at by some senior party officials and other stakeholders.

The vice president had nearly settled in his seat when Tinubu arrived at the venue with thunderous shouts of ‘Jagaban’ renting the air for more than 10 minutes.

Senate President Ahmad Lawan came in shortly after Tinubu but his arrival was overshadowed by the rousing ovation, singing and dancing by the supporters of the former Lagos governor.

Daily Trust reports that all the aspirants were given two minutes to address the delegates before voting commenced.

As of the time this report was filed, at 3am,  no fewer than 2,203 delegates were voting for their preferred aspirants.

We must remain united – Buhari

President Muhammadu Buhari has called on members of the APC to remain united and avoid acrimony.

The president made the call on Wednesday in his address at the Eagle Square, the venue of the special convention of the party in Abuja.

He said the critical task ahead of the Abdullahi Adamu-led National Working Committee (NWC) “remains to continue to forge the unity of purpose among party members and to keep securing needed compromises in the interest of the party.’’

He rallied delegates at the special convention to consider voting for the presidential candidate with the best chances of securing victory in the 2023 general elections.

He also said the party needed to choose a leadership to continue and improve on the landmarks.

The president said the flagbearer must be knowledgeable, a fair-minded nationalist with a very strong belief in the unity of the country and strength of character and purpose to steer the country forward.