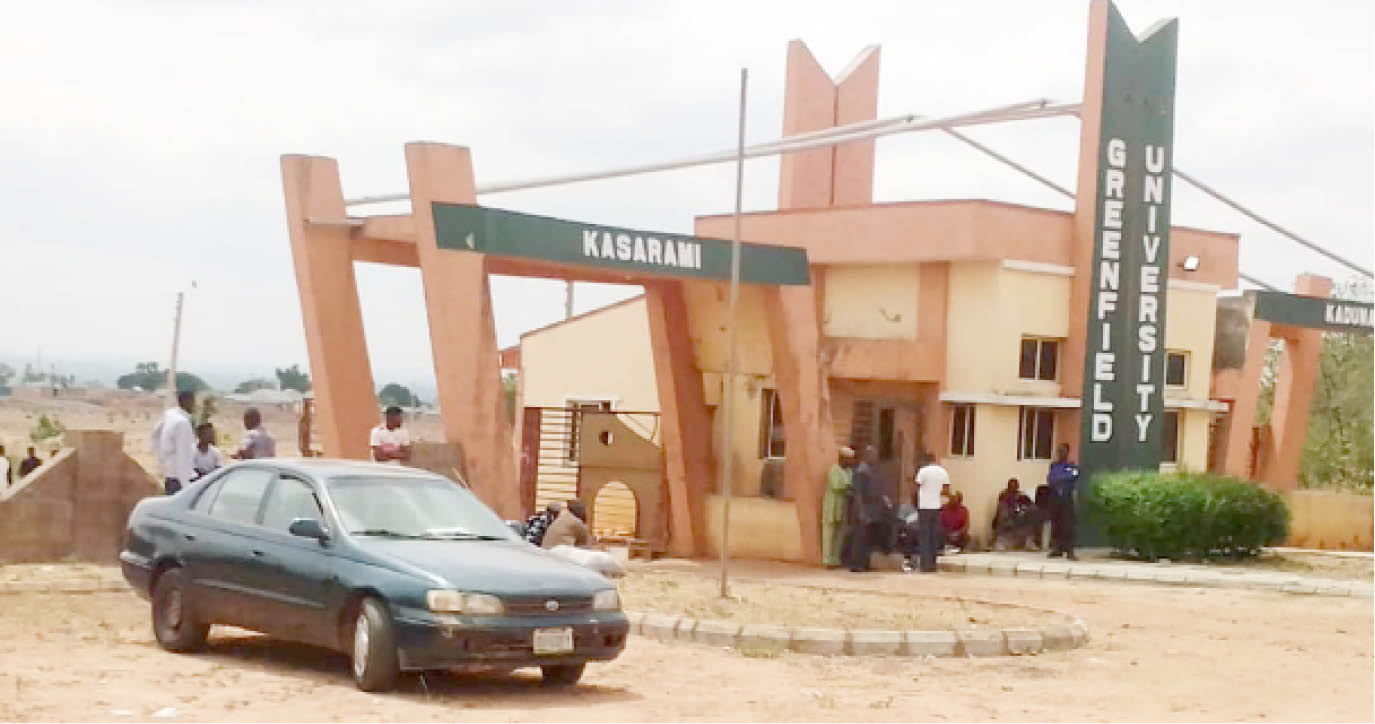 Greenfield University Kaduna. While the front of the university has a short perimeter fence, the land behind the school is open, making it accessible to criminals

Bandits who abducted an unspecified number of students from the Greenfield University Kaduna on Tuesday have murdered three of the students and dumped their remains near the school premises.

The killings have sparked outrage from right groups and fears among parents of some of the students abducted in the university and those of the Federal College of Forestry Mechanisation Afaka.

Daily Trust reports that the private tertiary institution established in 2019 is situated in Kasarami, about 30 kilometres from Kaduna, along the Kaduna-Abuja highway in Chikun Local Government Area of the state.

Gunmen had on Tuesday at 8.30pm invaded the school premises, killed a staff and abducted about half of the student population, Daily Trust gathered.

The bandits had later contacted some of the parents demanding for N800 million for the release of the students.

Sources had told Daily Trust that the bandits had taken advantage of the porous vicinity behind the school which has no perimeter fence and a distance of about 20 kilometres from the nearest hamlet.

However, three days after the attack, with no information about the exact number of students abducted, the Kaduna State Government, through the Commissioner of Internal Security and Home Affairs, Samuel Aruwan, said the remains of three students were found at a village called Kwanar Bature, near the school.

Aruwan had said the remains had been evacuated to the mortuary, adding that Governor Nasir El-Rufai had condemned the killing and described it as “sheer wickedness, inhumanity and an outright desecration of human lives by vile entities.”

He said El-Rufai had stressed that the armed bandits represent the worst of humankind and must be fought at all cost for the violent wickedness they represent. “Evil would not triumph over God-given humanity,” Aruwan quoted the governor as saying and appealed to citizens to unite together against the forces of darkness challenging national security and the very existence of the Nigerian state.

Governor El-Rufai has insisted that he would not negotiate with bandits and had stressed that even if his son was abducted, he would not pay ransom to the bandits.

Daily Trust gathered from sources around Kwanar Bature that the bodies evacuated on Friday were that of a female and two male students and that the bodies were suspected to have been dumped in the area early on Friday.

A source from the community told our correspondent that the remains of the victims were found in a pool of blood but said the corpses were fresh, an indication that they were killed not long ago. He said there had been pandemonium in the village when the remains of the students were discovered before the arrival of security agencies.

Speaking on whether the students may have been killed on Tuesday when gunmen invaded the school, security sources on Friday told Daily Trust that it was unlikely as security agents had combed the surrounding villages on Wednesday after the attack and did not notice any corpse.

“We went as far the very spot where the corpse was found on Wednesday, the military and police combed the entire area but there was nothing. There is no doubt that the students were killed recently and dumped there for us to find, because the bodies were fresh,” she said.

Also speaking to our correspondents, Georgina Stevens, whose younger sister was abducted from the school, urged the government to ensure the safe release of their children adding that she has been unable to sleep or eat since the abduction. “Those children are innocent, they are in pain,” she told our correspondent while sobbing.

Our correspondent contacted the Public Relations Officer for Greenfield University, Kator Yangeh, who said the school authority is yet to make an official statement and that he was not authorized to speak on the matter.

The discovery of the corpses on Friday has sparked fear among parents and relatives of the remaining 29 students of the Federal College of Forestry Mechanisation Afaka who were abducted on March 11, 2021.

Daily Trust reports that after 39 students were abducted from Afaka, 10 had been released with the bandits still insisting that N500m be paid for the release of the remaining students. However, our correspondent gathered that the bandits have reduced the ransom to N300m with the condition that they were ready to swap the students for some of their commanders arrested by security agents.

“Every day, we get calls with threats from the bandits that they will kill our children and it traumatizes us. We are praying that the bandits will release our children,” he said.

Meanwhile, the Human Rights Writers Association of Nigeria (HURIWA) has condemned the killing of three kidnapped students of the Greenfield University, blaming Governor Nasir El-Rufai for the incident.

The National Coordinator of the organisation, Comrade Emmanuel Onwubiko, said on Friday in Abuja that the killing of the students who were kidnapped few days ago is a culmination of lack of political will on the part of the state governor to act appropriately.

“We blame him for this unfortunate incident. The governor compounded the problem of the commoners who are at the receiving end of the activities of these insurrectionists and terrorists, by continuously making all kinds of incendiary statements and reckless media pronouncements about the kidnappers.

“These same kidnappers that the governor has demonstrated a lack of political will to arrest and prosecute for their crimes against humanity, the governor has gone on to advocate that they should all be killed. Who does that in a Constitutional democracy, to kill without following the due process of the law? This is anarchy.

“What kind of a governor is that who will provoke criminals that he has refused to arrest? So, these criminals have now descended on their victims and killed them to test the ‘might’ of the governor who proclaims that ‘Might is right. This is absolutely absurd and condemnable,” Onwubiko said.

Daily Trust reports that Governor El-Rufai had severally said he will not negotiate with bandits and kidnappers because they lacked humanity in them.

He also said all the governors were unanimous on what to do with the criminal elements.

“Our position as governors and we are unanimous in this because we, the northern states’ governors, met with the president on this subject and our unanimous position is to wipe out the bandits.

“We must go into these forests; nobody living in that forest is innocent and just kill them all. It is the only way to end this,” he said.