And they’re all running on Buhari’s lucky charm

A lot of people have been throwing their hats into the presidential race, some openly and others by proxy. One thing is certain, even among APC… 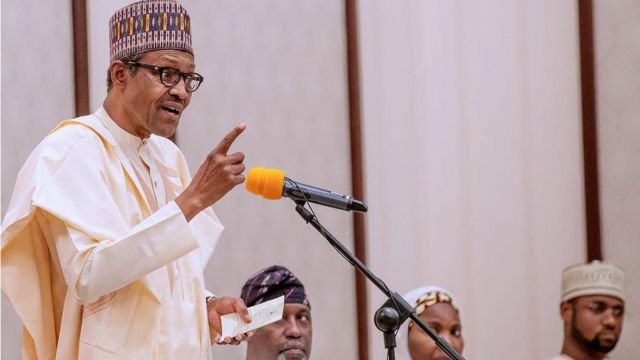 A lot of people have been throwing their hats into the presidential race, some openly and others by proxy. One thing is certain, even among APC stalwarts, there is an agreement that things are not rosy under Muhammadu Buhari. The parties have fixed their aspirations and nomination fees and they show that inflation is eating Nigeria up. I mean, yours truly cannot afford to aspire as a councillorship candidate even under APGA which appears to have the lowest aspiration fee of the so-called registered parties.

Thus far, even confirmed billionaires have no money to buy nomination forms. Vice President Atiku Abubakar is not a pauper by any stretch of the definition, but even he cannot afford to buy his own form. Several years of aspiration apparently leaves you in penury even if the optics show something different.

Ex-talaka aspirant, now President Muhammadu Buhari got there where he could no longer finance his aspiration with First Bank loans, so his fellow talakas launched a go-fund me account and bought him his winning ticket. Like every gambling addict knows, it takes many contributors to pay for one big winning ticket. I thank Karl Marx for exposing me to that truth early enough. Unlike Nigerian voters, I don’t play lottery. Some contributors now want their money back, but it is too late.

Following that trajectory, one could have predicted Atiku as the next anointed occupant of Aso Rock especially as he has exhibited incapacitation to buy his own ticket. Unfortunately like everything Nigerian, one person’s luck induces everyone to jump on the bandwagon.

Aminu Tambuwal, Rotimi Chibuike Amaechi’s alter ego on luck has foiled Atiku’s ride with luck. For the past 24 years, Amaechi has never had to work a day in his life. Like Tambuwal, he started as SA, then dabbled into politics becoming a state legislator, then speaker for two terms, then governor for two terms before becoming federal minister for two terms.

If Amaechi learns to keep his large mouth (pun intended) shut, he will make history as a man of eights! Even if he never ‘aspires’ ever again, his finances are sealed in buoyancy. Amaechi is a survivalist who recently told reporters that staying away from Nyesom Wike’s Rivers is a survival strategy. However Amaechi is like Walter Ofonagoro – he talks too much! Lately, he tried to politique with a national disaster. With him as transport minister, efforts to make Nigeria’s moribund train meet 1822 standards materialised – God be praised if locomotive coaches are your hallmark for achievements in an era when ungodly China has competed and won against the velocity of sound with its supersonic trains. But give it to Amaechi, he supervised Buhari locomotive revolution with Buhari’s luck as a successful farmer.

But in Nigeria, enemies are always at work. So, while Amaechi was thanking his chi for his achievements in the rail industry, technically defeated Boko Haram waited for the right moment to mess with him. They found the opportunity in an attack on an Abuja-Kaduna train in which eight were killed, dozens wounded and others abducted. Trust a politician to leverage on disaster – Amaechi blamed his fellow members in cabinet. He explained that his locomotive blueprint came with a fool proof security plan foiled by fellow members of the federal executive council. For novices, the FEC is where government contracts are awarded with the oil of corruption.

Anybody hearing Amaechi’s cries would have given him a rogue NUJ Governance Award (he is still a good candidate for it anyhow). Except enemies are not done with Amaechi’s claim to piety and clairvoyance. They have revealed how Amaechi picked an unholy trinity company – one owned by three people with the same surname. The company had no prior record of performance in any similar venture (stupid people who underestimate the power of new beginnings). It had no proven capacity to perform the job it bided as if that mattered.

These facts would not have been exposed if Amaechi had apologised to Nigerians, resigned for messing up big-time and disappeared into oblivion to enjoy his hard-earned privileges. But he did not make it this far by being conscientious. Henceforth, he would have to thread softly until Nigerians have forgotten his perceived and known foibles. Once he gets there, he count on his lucky number eight for his next ambition which some have sworn is to be Nigeria’s president.

Nobody knows when Amaechi might play his next joker, but he ought to have made enough friends to buy him a nomination form. For now, Aminu Tambuwal has beaten him to it. The former legislative aid turned Speaker, turned two-term Governor of Sokoto State is so poor at the end of it all that they had to go-fund him to buy forms. As we pray in Nigeria, may we never lack friends to support our inordinate ambitions to play beyond our league. The congregation always shouts – amen!

Atiku, Tambuwal and Bauchi’s present Governor Bala Muhammed are all running on Buhari’s luck. As FCT Minister, Bala Mungu, as his enemies call him, tried to keep liberated women off the streets with a task force whose major task was not to clear Abuja’s heap of rubbish, or unblock its clogged drainage but ensure that single women do not walk the streets without a chaperon. Young women who broke the law are hunted down and sometimes raped just to prove that they have lost their virginity. Now Bala wants to replicate that model across Nigeria. No need to fight hunger, insecurity, homelessness or joblessness. May Bala’s dreams find fulfilment!

Last but not the least comes Yahaya Adoza ‘David’ Bello, Kogi’s Lord of the Manor. Bello is the man whom fate and judicial rigmarole installed as governor in Lugard House before Kogians realised he had neither the blueprint nor the capacity to govern a ward. Like a closet despot, he hunted and hounded opposition either into silence or death and that includes women. Natasha Akpoti a political Amazon lived to witness the munificence of Bello’s terror when her campaign headquarters were razed on the eve of elections followed by her uncle’s country home.

Akpoti is luckier than Madam Salome Abu, who was burnt alive in her own house in Ochadamu. In spite of that, just when Kogians thought they had realised their mistake and prepared their PVCs to smoke Bello from his gym of violence, he unfurled a joker from his pouch of tricks. He hired the president’s wife Madam Aisha and recruited Nasir El-Rufai, Kaduna’s governor. They arrived in Lokoja and on bended knees pleaded for Kogians to forgive Bello and give him a second chance.

Bello did not count on it alone, he armed thugs and recruited the police who came in helicopters, shooting to disperse crowds vowed to guard their votes. In the end, Bello was declared winner and Kogi returned to the worst – insecurity, unpaid salaries, sexual violence, nepotism, dilapidated infrastructure and ill treatment of retirees and pensioners. Bello ices these ‘achievements’ by being a COVID denier. Now he wants to replicate these accomplishments at the federal level including millionaires.

This is why Farooq Kperogi, Kogi West’s eternal brother in-law took Bello to the cleaners in a social media post in which he called Bello an ‘incorrigibly petulant child trapped in an adult’s body’ and ‘destroying the littlest semblance of decency left in government in Kogi State’. We won’t play with Farooq anymore.