Akwete: Where weaving clothes is forbidden for men

The giant statue of Daada Nwakata, the matriarch of Akwete and originator of the town’s art of weaving, standing tall at the town’s gate welcomes… 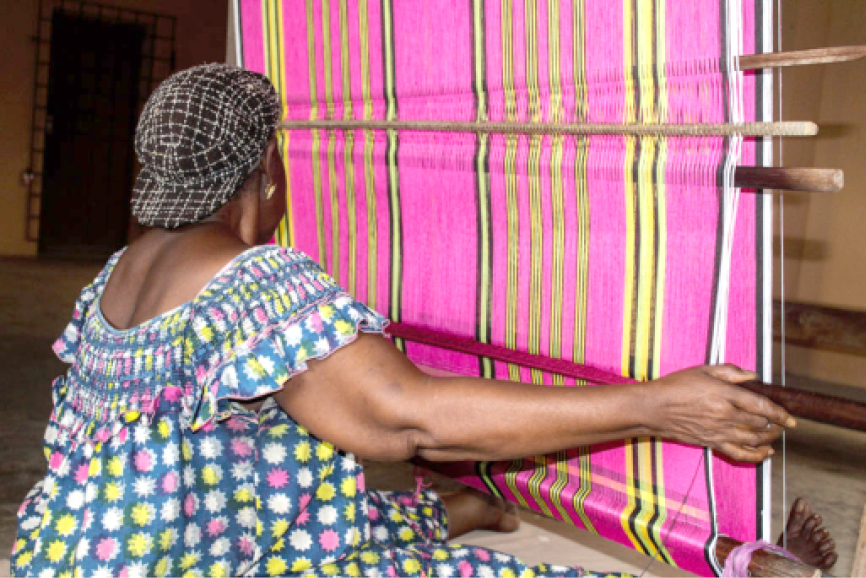 The name Akwete is neither new nor strange, especially to women who take joy in wearing Akwete wrappers – a unique hand-woven textile the town is known for.

The giant statue of Daada Nwakata, the matriarch of Akwete and originator of the town’s art of weaving, standing tall at the town’s gate welcomes visitors to the area.

The community lies between North East of Port Harcourt and South East of Aba. It is the headquarters of Ukwa East Local Government Area of Abia State and one of Igbo’s most strategic towns.

The inhabitants of Akwete are predominantly of the Ndoki clan of Igboland whose kith and kin are also found in Rivers and Akwa Ibom states. The town has many routes to Ogoniland in Rivers State and Annang land in Akwa Ibom, who are their neighbours.

It is also a riverine town that played huge roles in the early 19th-century slave trade as it was one of the main destinations of the Aro slave traders. It lies a few nautical miles away from the Atlantic Ocean.

In Akwete, it is an abomination for a man to get involved in the cloth weaving business as it is customarily a women’s preserve. Akwete men are aware of this and do not venture into weaving.

“I was born to meet it that way. No matter the joy and love we (men) have for weaving, we dare not venture into it because it’s a taboo and a serious affront to our women. It’s their right, it’s their inheritance. No man born by a woman can take it away from them,” says Elder Chidi Adiele.

Adiele, who is a retired school teacher, said from time immemorial, Akwete men have always been fishermen while their women weaved clothes. He added that Akwete’s oral history had it that weaving began around the 15th century before the arrival of the British colonialists into Igbo hinterlands.

Adiele, however, said the art of weaving by Akwete women is not just ordinary, as it was a gift from their ancestors

“However strange it may sound, it’s our tradition. The ancient gods of Akwete gave Daada Nwakata the vision. Our fathers warned us that few stubborn men who tried to go into weaving got terrible spiritual problems,” he said.

The septuagenarian said women could tell a boy to help them get some weaving materials, but will stop allowing him to come close when he becomes an adolescent.

One of the Akwete weavers, Madam Esther Chukwu, said the gift is usually transferred from mothers to daughters, stressing that they taught their daughters from childhood that weaving is their pride and a household business that will make them financially strong.

“I’m from here and I’m married here. My own mother told me that the gods gave weaving to Dada Nwakata as a women’s business. I’ve never seen any man weaving since I was born because they know they cannot change the decisions of our ancestors,” she said.

However, prior to contact with modernisation, the raffia fibre which is processed into a yarn was the main thread used for making the Akwete fabric. Back then; all items needed for the production were gotten from raffia trees in Akwete.

As modernisation stepped in, changes came in and improved on the raw materials used; like the durable embroidery threads from China.

Akwete weaving is done on a vertical loom as depicted in the sculpture of Dada Nwakata standing at the town’s gate. It is beyond just intertwining threads. The women apply their experiences and expertise in combining threads of different colours. They create aesthetic textures, decorative patterns and add effects to make their fabrics unique.

She said years ago, the white people usually visited  Akwete to buy their clothes, but insecurity, especially kidnapping, has scared them away and impacted negatively on their sales.

Ebere said most of their customers are from neighbouring states as well as visitors from Lagos.

“Government officials will come, make promises after showcasing our works and skills in many trade fairs but at the end, you will not see them again,” she lamented.

“Buying the yarn and other materials has made it impossible to see any Akwete fabric selling for less that N15,000 to N20,000,” an Akwete weaver, Mrs. Justina Wogu, added.

She urged government to help them get the silk and cotton yarns at cheaper rates, as well as provide loans to support the business.

Mazi Christian Chukwuemeka Uwaezuoke described weaving business by Akwete women as a neglected industry by both past and present Abia State governments, stressing that it was only the government of late Chief Sam Mbakwe during the old Imo State era that supported the women.

“Government is always talking about local content policy, looking inwards, diversification and all manner of talks, but they’re absolutely doing nothing to help these women.

“These women are creating employment for themselves and others. They’re helping their families and younger ones without disturbing anybody or asking for too much,” he said.

He said a team from the Raw Materials Research and Development Council visited the area three years ago but nothing has been heard from them again.

“Some time ago, some youths also said they came to understudy it and know how to leverage its marketability through linking some companies overseas, but after that nothing came.  One of the original pieces of Akwete is in the British Museum in London, showcasing Nigeria and the contributions of the Black women towards civilization,” he added.