Commercial motorcyclists operating in Mbierebe Obio community in Uyo, Akwa Ibom state have protested the alleged killing of their colleagues by some Policemen attached to… 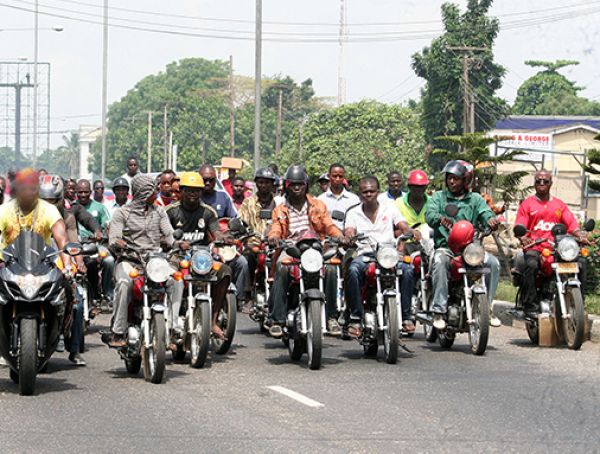 Commercial motorcyclists operating in Mbierebe Obio community in Uyo, Akwa Ibom state have protested the alleged killing of their colleagues by some Policemen attached to the State Anti-Robbery Squad (SARS).

Our correspondent gathered that the SARS’ men who killed the motorcyclist, had taken his corpse in their van to the State Police Headquarters, Ikot Akpanabia, and from there to the mortuary.

It was learnt that since Tuesday when the incidence happened, residents of Mbierebe Obio community have been subjected to acts of violence by the motorcyclists in protest of the killing.

Houses of residents around the vicinity of the killing, including the Nigerian Television Authority (NTA), Uyo station were among properties reportedly torched, while several vehicles belonging to the government were vandalized.

The Police was said to have gone to the NTA station to make the announcement that the ban on the use of motorcyclists was still in force, which led the angry motorcycle operators to visit the station and set part of it on fire.

According to Enobong Ukpe, a tricycle operator along the Goodluck Jonathan Boulevard, where the incident took place, the deceased was shot dead when policemen attached to SARS were trying to enforce the ban on the operations of commercial motorcycle in Uyo metropolis.

“He, the deceased, had resisted the Police who tried to seize his motorcycle for violating the ban on motorcycle operations in Uyo”, he said.

Effiong Usen, a motorcyclist from neighbouring Ibiono Ibom local government area said, “I usually come to Uyo to do my business since there are not many passengers in my community.”

He stated that the protest became necessary due to incessant harassment by the Police.

Investigations show that the Mbierebe axis extending to the Godswill Akpabio International Stadium has been locked down and businesses are at a standstill as the rioting cyclists battled armed security agents.

The motorcyclists were seen pelting stones and other dangerous objects at any official government vehicle.

He said the motorcyclists have shown a non-compliant attitude since the ban was announced.

He advised them to ply their trade within the confines of the free areas and avoid straying into the restricted zones as directed by the state government.

He also announced the re-imposition of the ban on motorcycle operations between 6:00am and 6:00pm in Eket local government area following the resurgence of violent crimes there.