As the 2023 general elections approach, politicians and interest groups have resurrected new and traditional issues for litigation against the main presidential candidates of the… 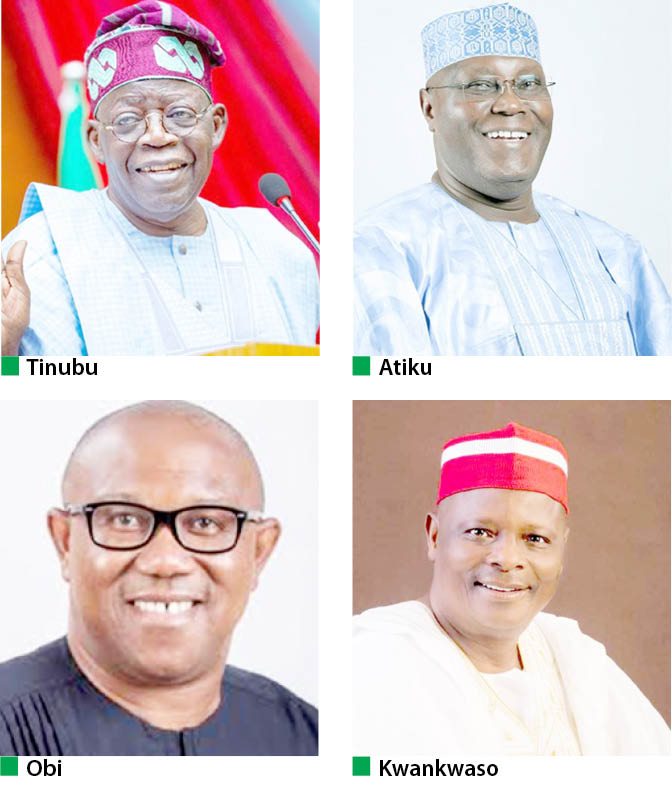 As the 2023 general elections approach, politicians and interest groups have resurrected new and traditional issues for litigation against the main presidential candidates of the various political parties. There are pending cases against the candidates of the All Progressives Congress (APC), Bola Tinubu; Peoples Democratic Party (PDP), Atiku Abubakar; Labour Party (LP), Peter Obi; and the New Nigeria Peoples Party (NNPP), Rabi’u Kwankwaso.

For Tinubu, fresh suits have been filed over allegations bordering on certificate forgery, perjury and nomination of running mate.

On June 16, 2022, a civil society group, Centre for Reform and Pubic Advocacy, wrote the Inspector-General of Police (IGP), Usman Baba Alkali, demanding the arrest and prosecution of Senator Tinubu within 48 hours over alleged perjury.

The legal adviser of the organisation, Kalu Kalu Agu, said the IGP had failed to act on an earlier letter accusing Tinubu of “false information on oath, contrary to sections 191 and 192 of the Criminal Code Act, LFN, 2004, which he admitted he did not possess in Annexure C.”

On July 4, the group filed a suit before a Federal High Court in Abuja seeking an order of mandamus compelling the IGP to arrest and prosecute Tinubu for the alleged perjury.

The court, presided by Justice Inyang Eden Ekwo, on July 28, granted leave for an order of mandamus sought in the ex-parte application by the group following the failure of the IGP to effect the arrest and prosecution of the former Lagos State governor on the allegation of supplying false information on oath in the Independent National Electoral Commission (INEC) form 001 over his educational qualifications. The matter was fixed for hearing on November 1.

Though a Federal High Court in Abuja on July 6 dismissed the suit by two chieftains of the APC, which sought to stop plans to replace Kabiru Masari as the running mate of the party’s 2023 presidential candidate, Bola Tinubu, after he was picked, subject to the INEC timetable, another suit was filed challenging the choice of Kashim Shettima as the vice presidential candidate.

In the suit by the Action Alliance (AA), the party wants the court to disqualify Tinubu’s APC ticket over an alleged double nomination offence against Shettima.

Similarly, a Federal High Court in Abuja fixed October 6 for the hearing of a suit by a former Minister of Education, Chukwuemeka Nwajiuba against Tinubu through a CSO, the Incorporated Trustees of Rights for All International challenging his alleged massive vote buying. The PDP candidate, Atiku was also joined in the suit as a defendant.

In the application before the Federal High Court in Abuja on July 28, the party is asking the court to disqualify the APC from the 2023 presidential polls because it nominated Shettima for more than one constituency in the 2023 general elections.

In the latest suit marked: FHC/ABJ/CS/1256/2022, AA is contending that the APC contravened section 35 of the constitution and the Electoral Act, 2022.

The suit, brought by the AA through its counsel, Ukpai Ukairo, joins the INEC, APC, Tinubu and Shettima as  first, second, third and fourth  defendants respectively.

In an affidavit in support of the suit deposed to by Mr Kalu Agu, the party claimed that the APC contravened the law when it submitted the name of Shettima, both as a candidate for the Borno Central senatorial district and vice presidential candidate in the 2023 general elections.

“The second defendant (APC) also submitted the name of the fourth defendant (Shettima) as its candidate in Borno Central senatorial election for the 2023 election. Shettima also swore to INEC form EC9 in his capacity as the said candidate and same was submitted to the first defendant (INEC),” he said.

An earlier suit by the AA had sought to disqualify Tinubu over an alleged forgery of the documents placed in his form EC9 submitted to the INEC.

The suit, filed on July 10, had also accused the then placeholder, Ibrahim Masari, of submitting a forged certificate when he listed the Kaduna State Development Centre as a school attended.

Although a Federal High Court had on February 21 dismissed a suit seeking to disqualify Atiku Abubakar of the PDP from seeking elective office in Nigeria on the grounds of citizenship, a new suit was filed by a lawyer seeking similar reliefs.

The lawyer, Johnmary Jideobi, in the suit before a Federal High Court in Abuja, is challenging Atiku’s eligibility to contest the 2023 presidential election.

In the originating summons marked FHC/ABJ/CS/751/2022 and filed on Tuesday, the lawyer maintained that Atiku, who is the presidential candidate of the PDP, is not constitutionally qualified to participate in the presidential contest on the grounds of citizenship.

The lawyer contends that by the combined provisions of sections 1(1) & (2), 25 and 131(a) of the Nigerian constitution, Atiku cannot contest for the office of the president of the Federal Republic of Nigeria, alleging that he is not a Nigerian by birth.

He argued that Atiku was born on November 25, 1946 in Jada, which was at the time in northern Cameroon, adding that it was by the plebiscite of 1961 that the town was incorporated into Nigeria.

Consequently, he requested the court to act swiftly to stop Atiku, the PDP and the INEC, who are the first, second and third defendants, from allowing Atiku to emerge as the president of the Federal Republic of Nigeria.

The outcome of the PDP presidential primary has also attracted a legal dispute as a suit is pending before the Federal High Court in Abuja challenging it.

The suit, with the number, FHC/ABJ/CS/782/2022, was brought by a PDP chieftain, Newgent Ekamon, against Atiku, the Sokoto State governor, Aminu Tambuwal and the PDP, over the outcome of the primary election, which was held in Abuja on May 28 and 29, 2022.

The aggrieved chieftain, in the suit brought by his counsel, Arthur Obi Okafor, a Senior Advocate of Nigeria (SAN), wants the court to invalidate Atiku’s candidacy and declare Wike the candidate of the PDP, adding that Tambuwal’s withdrawal invalidates his votes.

A second suit by some individuals seeking to stop the proposed #ObiDatti23 Forward Ever’ by supporters of the LP, scheduled for October 1, was refused by a Federal High Court in Lagos.

The plaintiffs had in their ex parte argued that the rally could cause a breakdown of law and order in Lagos, similar to the October 2020 #EndSARS rally in which lives were lost and properties destroyed across the state.

They further sought an injunction to prevent the rally from going ahead, as well as the organisers from using the Lekki toll plaza or any other space within Lagos State.

The court on September 28 gave a go-ahead for the rally but restrained the OBIdients from converging at the Lekki Toll Gate.

The presidential candidate of the NNPP, Rabi’u Musa Kwankwaso, has also been served with a suit by the Action Alliance, challenging the nomination of his running mate, Pastor Isaac Idahosa.

The suit, which was filed by a faction of the AA before a Federal High Court in Abuja, had joined the NNPP, Kwankwaso and Idahosa over an alleged unlawful nomination.

The AA, in the suit by their counsel, Ukpai Ukairo, is asking the court to restrain the INEC from accepting the nomination of Kwankwaso and Idahosa for the February 2023 presidential election, alleging “that the NNPP did not submit their names at the close of nomination.”

There are also cases brought jointly against the candidates of the major political parties.

Among these is the recently dismissed suit by the PDP seeking the disqualification of the APC and LP presidential candidates accusing both Obi and Tinubu of acting in breach of the Electoral Act by failing to nominate running mates and in time and picking Kabiru Masari and Doyin Okupe as their placeholders respectively.

The PDP had contended that the APC and LP were in breach of section 142 of the Nigerian constitution, which provides that a person cannot be validly elected as president except he nominates another candidate as his associate from the same political party.

The APC had on June nominated Masari as its temporary running mate while the LP nominated Okupe in the same place ahead of INEC’s deadline of June 17 for the submission of lists of candidates.

The suit, filed by three lawyers, Ataguba Aboje, Oghenovo Otemu and Ahmed Yusuf, marked FHC/ABJ/CS 1004/2022, seeking the disqualification of the three presidential candidates of the APC, PDP and LP respectively over their non-compliance with the law in the conduct of their primaries, is still pending.

Specifically, the lawyers are contending that the candidates did not announce their running mates before the primary, and were, therefore, not validly nominated and declared winners.

They further averred that many days after the conclusion of their respective primaries, the APC, PDP and LP submitted to the INEC, names of Kabir Masari, Ifeanyi Okowa and Doyin Okupe as their respective vice presidential candidates; hence, such nominations were not in compliance with the 1999 Constitution.