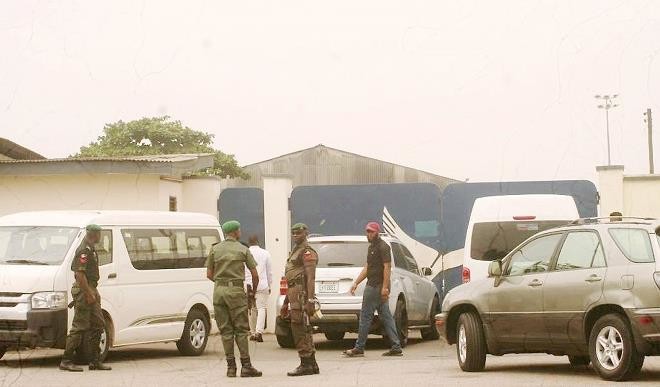 There was commotion at the corporate headquarters of Arik Air in Lagos on Wednesday when some aggrieved passengers besieged the office demanding refunds for their cancelled flights.

The aggrieved passengers were however met with stiff resistance by a heavy detachment of policemen who were mobilized to prevent the passengers from gaining entrance.

Armed security men blocked the gate of the airline’s headquarters located along the Murtala Muhammed International Airport (MMIA) in Ikeja Lagos with their Hilux vehicles.

It was learnt that the airline must have gotten wind of the plan by the aggrieved passengers to storm the headquarters prompting it to mobilize the security men.

Arik Air, the largest carrier in West and Central Africa, has been having a running battle with its passengers in recent times over persistent flight delays and cancellations.

Recently the Aviation unions disrupted operations of the airline over non-payment of salaries. The intervention of the Nigeria Civil Aviation Authority (NCAA) pacified the workers.

There was no official comment from the airline as of the time of filing this report as the spokesman, Mr. Adebanji Ola did not pick several calls put to him by our correspondent. He did not also respond to the text message sent to him.

However, one of the aggrieved passengers who refused to disclose her identity claimed that her N800,000 ticket funds have been trapped with the airline since December 23, 2016.

The funds, according to her, were paid for the tickets purchased on behalf of a group of passengers travelling to Johannesburg, South Africa.