About a year after the renovation of the Government Comprehensive Secondary School (GCSS), Dadin-Kowa, Gombe State, our correspondent visited the school and reported how learning… 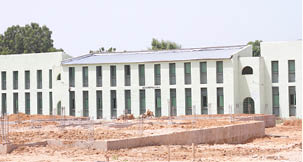 About a year after the renovation of the Government Comprehensive Secondary School (GCSS), Dadin-Kowa, Gombe State, our correspondent visited the school and reported how learning has improved.

GSS Dadin-Kowa is now wearing a new look following a December 3, 2019, report by Daily Trust with the headline, ‘Inside Gombe School where students share hostels with bats’.

The report caused the governor, Alhaji Muhammadu Inuwa Yahaya, to visit the school, to see for himself the poor state of infrastructure.

He then pledged to take prompt action to repair and upgrade the school to a model one equipped with modern educational facilities.

FG, others urged to increase investments in occupational health

About three years after the assessment by the governor, a visit by Daily Trust showed that the school now wears a new look, has well-furnished classrooms, equipped laboratories, a befitting library, and other critical infrastructure needed for high-quality education.

Our correspondent reports that the classrooms, administrative block, and students’ hostels were furnished with desks beds and mattresses, while the school laboratories were equally equipped with modern equipment and apparatus for agriculture, biology, chemistry and physics subjects.

It was observed that four blocks of staff quarters were renovated, and a new 160-bed  hostel block was also built to complement the old one, which was totally refurbished.

There was also ongoing construction of classrooms, hostel blocks, as well as staff quarters at the school. Actually, it was recently designated as a ‘Mega School,’ alongside four other secondary schools across the three senatorial districts of the state.

At the time of the second visit, the school had been brought back to life, with learning going on in a conducive atmosphere. Some teachers were also seen waiting by the classroom doors for their respective turns to teach the students.

The principal of the school, Mr Samuel B. Wasa, told Daily Trust that the school now receives numerous requests from parents who want to enrol their children because of its improved infrastructure and quality of learning.

He said as a co-educational institution, the school has a population of over 800 male students in boarding, from JSSI to SSSIII while the females, who come as day students, constitute almost 45 per cent of the school population.

“The governor has done very well in the school. If you had come here two to three years ago, you would not have liked what you saw. But when the governor visited the school and saw how it was, within a short period of time, work started, and the school has now taken on a good shape,” he said.

He said the administration block, hostels, classes and staff quarters, among others, have been renovated, and both teachers and students are enjoying more facilities as desks and beddings were also provided for the students.

“In the past, the students didn’t even want to attend their classes, because they sat on the bare floor, but they now stay in their respective classes until closing time.”

For the teachers, he said they attend classes during their periods unfailingly and stayed in the staff rooms to prepare their lesson notes and lesson plans until closing time.

“Our students performed very well in the 2022 external examinations, where almost 80 per cent of them obtained five credits, including English and mathematics.”

“They also got good scores in the Unified Tertiary Matriculation Examination (UTME) which will qualify them for admission into tertiary institutions. As such, we are always proud and ever ready to show the results of our students to any visitor,” Mr Wasa said.

While noting that the school is competing favourably with even private schools, he said: “I can assure you that this school has more qualified teachers than some private schools.

The head boy of the school, Barnabas Yohanna, recalled that when the school was in bad condition, they were always complaining and as a result, some parents had to change schools for some of their classmates.

“But now that our school is renovated, parents are trooping to enroll their wards. The renovation has tremendously helped us, especially the children of the poor who cannot afford to enroll in private schools,” he said.

“Now we have good teachers and instructional materials that will motivate us to stay in our classes to learn. For instance, before the renovation, some of our schoolmates were absenting themselves from classes; some spent over a month after school opening before they would resume school,” he said.

On his part, the school’s Examination Officer, Yusuf Alhaji Idi, said there have been encouraging changes in terms of students’ performance since the school was renovated about two years ago.

“I can confidently say that the condition in which our students are learning now is far better than what it was before the renovation when the students were uncomfortable in the classrooms.

He also said there is improvement in students’ performance in national examinations. “Unlike in the past, when they hardly got four to five credits, now our students are getting up to nine credits.”

“It is in the records in the state that our performance before the coming of Governor Yahaya was about 27 per cent, now we have recorded over 86 per cent, which is a great achievement,” the examination officer added.

A Dadin-Kowa resident whose son is attending one of the schools, Malam Ibrahim Sani, recalled that students didn’t want to accept admission into GCSS, Dadin-Kowa before, but during a recent Parents Teachers Association (PTA) meeting, the school authorities informed them that now the reverse is the case, as parents try to lobby for admission for their wards.