Sanusi Hakeem Olukorede, a blind vendor, who was featured on Daily Trust Saturday recently after his video went viral wandering around Akowonjo and Egbeda in… 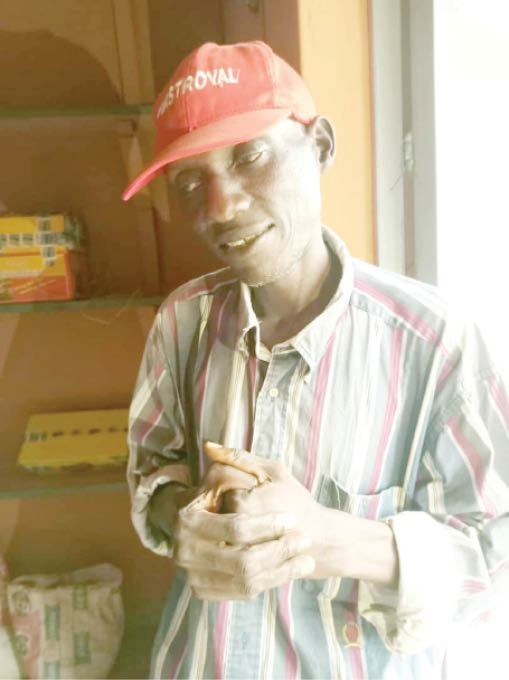 Sanusi Hakeem Olukorede, a blind vendor, who was featured on Daily Trust Saturday recently after his video went viral wandering around Akowonjo and Egbeda in Lagos with copies of newspapers, has gotten a facelift.

Through the intervention of a non-governmental organisation, the blind vendor has been able to secure a one-room shop at Ayetoro, Ogun State, after Ayobo in Lagos where he plans to sell foodstuffs on one hand while continuing to ply his trade as a newspaper vendor on the other hand.

Our correspondent had reported how Olukorede has been bracing the odds to make ends meet after losing his sight at his furniture workshop in Lagos.

Despite his visual impairment, the drive to make ends meet and provide for his family had pushed him into selling newspapers.

Sanusi had recounted how he became blind five years ago, saying many of his family members had tried to stop him from doing the business due to his condition, but he rebuffed them as he was not ready to become a liability to the family.

After his story went viral, he temporarily stopped selling newspapers while looking for a new lease of life to cater for himself and his family.

With a wife and three children, the middle-aged man used to stroll around the community in Alimosho Local Government Area despite his condition to sell national dailies.

But the intervention of Oxford Foundation, an NGO, after the Daily Trust Saturday  report, has given him a new lease of life even as he keeps hope alive for better conditions.

At Aiyetoro, a Lagos-Ogun border community under Ado-Odo Ota Local Government in Lagos State, our correspondent met him where he lauded good Samaritans who have shown up to alleviate his plight through several donations which helped him in securing a shop and some food items.

However, he said there is still a long way to go. He said, “As you can see, we don’t have anything in this shop, no table, no electricity and I also plan to continue to sell newspapers which was what brought me into limelight. I want to be displaying newspapers here.”

While soliciting for more support from Nigerians, he said, “There is still a long way to go in this shop. We were able to pay for two years and if we don’t have something tangible to sell, the goal would be defeated.”

Regarding his visual impairment triggered by glaucoma, he said while he would be happy to regain his sight, he looks up to God to perform a miracle on him.

“I currently use my drug which costs N27,000 monthly and I use it for just 28 days. The doctor told me it is only God that can intervene because that is what Glaucoma normally does but I believe there is nothing God cannot do. If I can regain my sight, I will go back to my work. I am a furniture maker and I attended a technical school where I spent three years. After that I still enrolled for another programme with the National Directorate of Employment (NDE) and to the glory of God, I have not done any job that somebody rejected,” he said.

He also commended the NGO which intervened by securing the shop for him and other Nigerians who empathised over his plight.

His wife who was with him at the time of this chat said the husband’s condition has taken a toll on the economic wellbeing of the family, stating that the little money she makes from hawking soft drinks in Lagos is barely enough to do anything for the family.