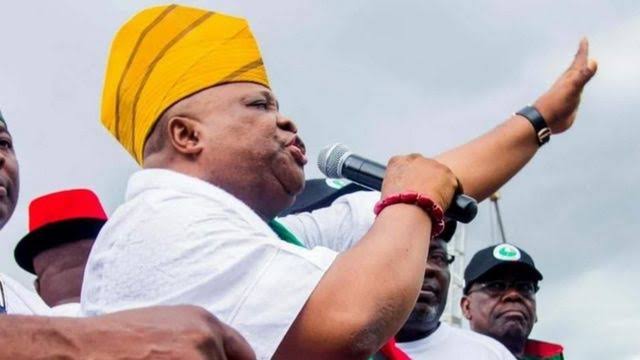 In an Executive Order 5 issued on Monday, Adeleke reversed the appointments of the Akinrun of Ikinrun, Aree of Ire and Owa of Igbajo, and ordered security operatives to seal up their palaces.

The new Owa of Igbajo, Oba Adegboyega Famodun, who was appointed and installed as Oba a week before the end of Oyetola’s tenure, is the immediate past chairman of the All Progressives Congress (APC) in the state.

The former governor had also approved the appointment of 30 permanent secretaries to the various ministries.

However, Adeleke in statement signed by his spokesman, Olawale Rasheed, about 24 hours after his inauguration, reversed all employments made in any capacity in all the ministries, departments, agencies, commissions, boards and parastatals after July 17.

He announced that the thrones of Akirun of Akirun, Aree of Iree and Owa of Igbajo would remain unoccupied pending the outcome of a committee of inquiry to review their appointments and subsequent installation.

The governor also issued five other executive orders covering the freezing of state bank accounts, staff audit, employment, appointments and the setting up of the review committees.

He directed all heads of ministries, departments, agencies, commissions, boards and parastatals of Osun State government to carry out a staff audit as of July 17 and to file a report to the Office of the Chief of Staff to the governor stating the full details and position/designation of each of the staff within seven working days.

A memo by the new Secretary to the State Government, Tesleem Igbalaye, said the suspension was in response to several petitions bothering on financial impropriety, dereliction of duty, absenteeism and abuse of office.

Also, the governor has directed the most senior career heads across all the local government council areas, the area office, LCDAs and ACDAs in Osun State to take charge of the affairs of their respective councils with immediate effect.

He said the directive was in compliance with the judgement of the Federal High Court sitting in Osogbo that sacked the purportedly elected local government chairmen and councillors.

Meanwhile, the APC said it has appealed the ruling of the Federal High Court on the matter.

The party’s media adviser, Mr Kola Olabisi, described the judgement as a ‘temporary setback’. “The development is just a temporary setback that would be redressed in an appellate court,” he said.