Abductions dip by 28% in Aug as troops scale up operations

Cases of abductions went down by 28 per cent across the country in the month of August, in comparison with the preceding month of July, … 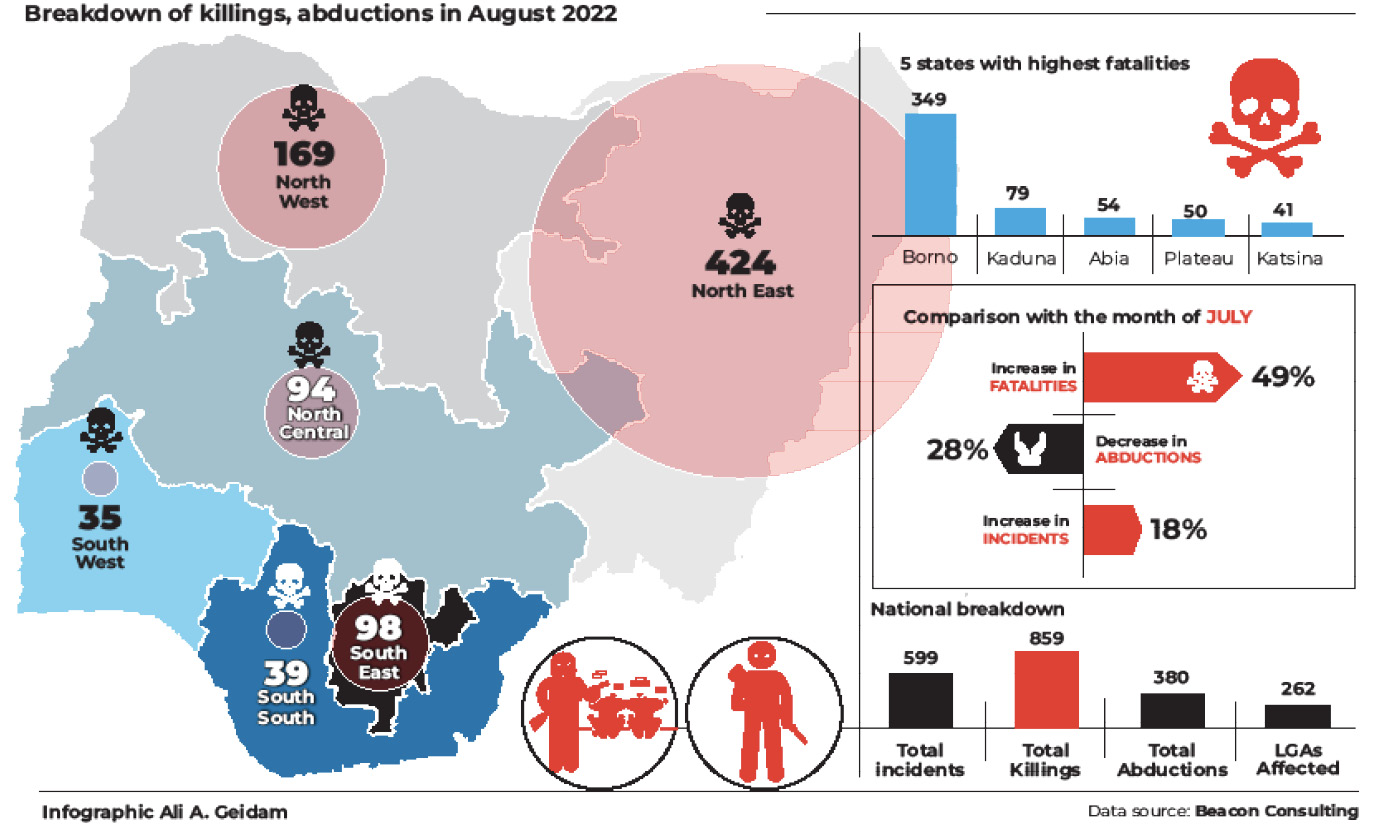 Cases of abductions went down by 28 per cent across the country in the month of August, in comparison with the preceding month of July, over what a report attributed to the ongoing security forces’ operations.

An Abuja-based security risk management and intelligence consulting company, Beacon Consulting, stated this in its latest report for August 2022, a copy of which Daily Trust obtained.

The report, however, showed that 859 people were killed in the same period with Borno and Kaduna states  topping the chart with  349 and 79 fatalities, respectively.

Though the report was not specific about the identities of the persons killed, Daily Trust reports that there was increased military activities lately to counter the activities of armed groups such as Boko Haram/ISWAP terrorists, IPOB terrorists, bandits, kidnappers, and other criminals. There were also reported cases of attacks on civilians and security forces by members of the armed groups.

The report indicated that there were 599 incidents across the country that resulted in 859 killings and 380 abductions, which affected 262 local government areas in 36 states.

The report titled, “Nigeria Security Report,” noted that the month of August was dominated by a visible increase in security forces’ action and the government claiming successes in the ongoing operations by security across the country.

“These claims reflected several interdictions and clearance security forces operations in FCT Abuja and the six geopolitical regions, as well as state-level measures by several regional and subnational entities.

“Other developments that dominated the monitored period included a continuation of social upheaval associated with organised labour and students’ union grievances with the government. These are in addition to the ongoing Russia – Ukraine war and the energy crisis, the supply chain disruptions, spiraling inflation, and the hike in commodity prices it triggered that have accentuated the structural deficiencies driving insecurity in Nigeria,” the report stated.

80% of incidents recorded in North

A further breakdown shows that Borno and Kaduna states recorded the highest fatalities of 349 and 79 respectively while Plateau recorded 50.

The report listed Osun, Gombe, FCT, Adamawa, Ekiti, and Enugu as states that recorded the highest incidents of political violence in the period under review. “In these states, the activities of youth gangs and groups affiliated with road transport unionists and their engagement by politicians as non-state actors in the political process were the main causes of most of the incidents we monitored.

“The trend is showing an increase in political violence associated with off-cycle state-level elections and ahead of the 2023 general elections,” the report stated.

The report cited two incidents in Borno and Gombe states where the instrument of state was used allegedly by the ruling party to target opposition political parties leading to the demolition of buildings associated with the opposition parties and triggering social upheaval.

“In one of the incidents, on August 30, 2022, in Gombe town, several people protested the demolition of a political party campaign office, which the development authorities stated had no development control approval. During the demolition, there were increased security forces deployed in the vicinity of the building. The protesters, including gang members of Kalare, threw rocks at security forces and local politicians but were forcefully dispersed when a security reinforcement arrived at the location,” the report stated.

According to the report, the monitored period was dominated by the growing agitation over the continued holding of several abducted persons, including travelers on the AK-9 Kaduna-bound train of March 28, 2022.

“Other trends that we monitored include attacks on commuters and rural communities, especially in the surrounding areas of Birnin Gwari, Kaduna State and along several routes in Niger, Katsina, Kebbi, Sokoto and Zamfara states. Most of the incidents are attributable to itinerant gunmen who have been dislodged from their camps as a result of security forces operations.

“In the border area of Niger, Kwara and Oyo states in the vicinity of Kainji Lake National Park, we are monitoring reports of the convergence of gunmen suspected to be bandits or terror groups. The reports indicate that there is a regrouping and concurrent consolidating of the group’s presence in forested parts of the reserve,” the report said.

In the South East,  the report stated, the major developments during the reviewed period included concerns over the activities of the state-level security formation Ebubuegu, non-state actors’ attack on security forces formations and personnel, the reactions to the rescinding of a contentious sit-at-home order over the continued detention and the trial in custody in Abuja of the proscribed Indigenous People of Biafra (IPOB) leader, Nnamdi Kanu and the security forces action against the group and criminal elements in the region.

“A trend we are monitoring is the increasing use of improvised explosive devices in targeted attacks in the region. There is also growing concern over targeted attacks of individuals profiled based on their ethnicity and religion. This has the potential of triggering a reprisal attack in other parts of the country if not contained.”

The report also noted that it recorded ongoing security forces operations and several violent criminal activities along travel routes in the South South, especially in Delta and Edo states, such as the Benin by-pass along the Lagos – Onitsha expressway and Lokoja – Auchi road. Other threat factors monitored in the region, according to the report included the intensification of the armed conflict between security forces and militant groups associated with illegal bunkering and other criminal activities in Bayelsa and Rivers states.

While pointing out that communities responded to the elevated security challenges by evolving self-help initiatives including attempts to institutionalise self-help and protection measures or protests, where they block major travel routes in a bid to call attention to the deteriorating security situation, the report noted: “All these are leading to a further collapse of social order and the yawning distrust between government and citizens.”

‘What govt’ needs to do’

“For the government efforts to decrease the ability of non-state actors to challenge the supremacy of the use of force by the state to be sustainable, the federal and state governments need to enhance collaboration for enhanced administration of criminal justice and the restoration of social order by addressing the root causes of these challenges including weak state institutions, drug addiction, socioeconomic grievances, poverty, unemployment and the effects of climate change as well as the proliferation of small arms and light weapons,” said Dr Kabiru Adamu, Managing Director, Beacon Consulting Ltd.

He listed other measures to include, collaboration between federal and state governments to dominate the forested and other ungoverned spaces, which the gunmen (bandits and terrorists, as well as other armed non-state actors) use as safe havens and to keep their victims.

“Additionally, there is a need for governments at the federal and state levels to halt the ability of the gunmen to move between locations (they currently mainly use motorbikes) and to block their supply chains for weapons and essentials including petroleum for their motorbikes and access to drugs,” he said.

Also speaking, a retired Assistant Inspector General of Police (AIG), Wilson Inalegwu, said for crimes leading to killings across the country to be curtailed, the government must address fundamental issues such as hunger, poverty and unemployment. “Government is doing its best to address the situation but these fundamentals must be addressed while law enforcement must also be maintained,” Inalegwu said.