Abducted students of the Federal University of Agriculture Makurdi (FUAM), in Benue State, have regained their freedom. The school authority had on Monday declared that… 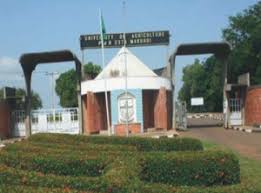 Abducted students of the Federal University of Agriculture Makurdi (FUAM), in Benue State, have regained their freedom.

The school authority had on Monday declared that an unspecified number of its students were taken away at gunpoint while studying in a theatre hall at the College of Engineering on campus.

Director of Information, Protocol and Public Relations (IPPR) of the University, Mrs Rosemary Waku, on Wednesday, however, disclosed that the students have regained their freedom.

Waku said two of the kidnapped victims were freed from their captivity on Tuesday while the others (unspecified) earlier escaped from their abductors.

“The students of FUAM that were kidnapped have been released.

“Kidnapped students of University of Agriculture have been released unhurt. Investigation into the case continues please,” she posited.

Anene added that no ransom was paid.

Both authorities did not explain further about the circumstances surrounding the release of the students whom their abductors had earlier allegedly placed a demand of N21 million for their freedom.