A day with Kano blind beader

When blind people and others with one form of physical challenge or the other are busy roaming the streets of Kano State begging, Ibrahim Ahmad… 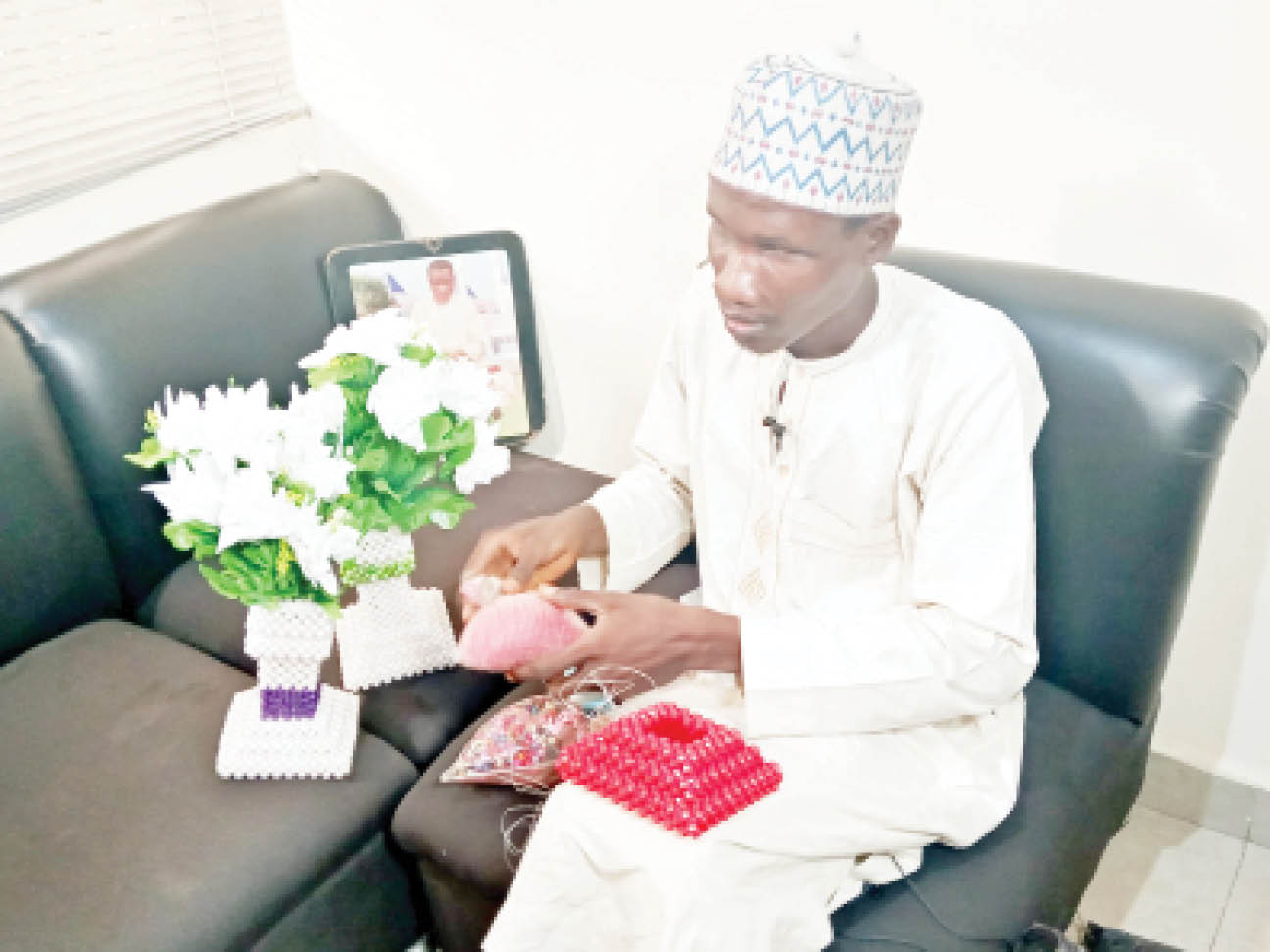 When blind people and others with one form of physical challenge or the other are busy roaming the streets of Kano State begging, Ibrahim Ahmad – a 36-year-old resident of Rubun community of Panda ward in Takai Local Government Area, who lost his sight at the age of five, resolved to change the narrative by learning a trade after his educational pursuits.

Because of his disability, Ahmad lost the opportunity to pursue western education, and rather attended Islamic school popularly known as ‘makarantar allo’ where he went to different schools and cities in pursuit of the knowledge. He later got married and decided to acquire a skill in order to fend for himself and family. He is now into bead making -using beads to create beautiful decorative pieces and other things.

In his quest to earn a living through being productive, Ahmed started with selling phones, which most people call “Jagwal.”

“I used to buy and sell second-hand phones. But with time, I fortunately met the person from whom I learnt this business in Nasarawa State.

“Honestly, I have never nursed the intent to beg for alms. I just wanted to be doing something from which I will make money to cater for myself. And as such, I devoted my time to learning various things from which I can make money. I dropped the previous business of phone selling and focused on beads making,” he revealed.

It’s been six years now since Ahmad has been earning a living through making beautifully designed and attractive items using beads, and according to him, his newly found business is paying the bills.

“Often times, people choose the design and colours they want. The main problem was that I did not have where to stay at first, so when I do the work, I move from place to place. Sometimes, I go to the mosque and public gatherings to display my work.

“Later, one man rented a shop for me and paid about N70,000. However, when the rent expired, I had to move out and relocated to the railway station. I openly display my work – both the ones I did and the ones I am currently working on to clear peoples’ doubt, because a lot of people do not believe that I do the beadwork myself,” he narrated.

He explained that while staying at the rail station, he sells two to three of his works daily. While Ahmad’s type of business is mostly practiced by women, he said the motivation for him as a man comes naturally.

According to him, his newly found means of living has accorded him the respect he wouldn’t have gotten if he had settled for begging.

“Before starting this business, whenever I tried making enquiries from people, some usually ignore me because of the wrong perception that I want to beg from them. But since I started this business, I’ve met a lot of people who cherish me and admire my work. They now accord me some respect.”

On how he is able to maneuver his beadwork without supervision and guidance, he says, “It is all about calculation. There are places where you will put two, four or six as the case may be. So, one has to understand how and where to put them respectively. It is something that is done with the hand, which the eye does not necessarily have to see, rather it is the holes that the eyes need to see, and the thread used is strong enough. Whenever I search for it with my hand, I recognize it immediately.

“From childhood, I grew up in the midst of people without visual impairment so I also see myself as someone who sees,” he said.

He also revealed that he has no difficulty doing what he does because whenever he goes to get his materials, he gives them specifications which he said they usually comply with.

“When I go to buy, I tell them the colour I want and when I get to the house, I will ask them to help me figure out the colour, after which I will make some marks on it so I will be able to feel it when the need arises,” he said.

Narrating his successes so far in the business, he said, people are his treasure so far.

“I have had a lot of help from people because of this business. There was a time I didn’t make sales, people gave me a lot of money and I was able to settle my debts and continue with the business.

“There was a man who helped me, and I am sure if not because of this business, he would not have helped me.

“Prior to the train attack, there was a woman I met at the train station in Kaduna, who admired my work and bought one from me. She told me that she had students whom she would want to learn the skill. She hired me and I did the work for her (training them) in Kano and I got paid for the work I did for about a week. Two days after the payment, my wife delivered a set of twins, it was the money that I used to settle the expenses,” narrated Ahmad.

“I usually spend two months in Abuja and Kaduna going round to sell my wares, but after the commencement of train services, I had a place (permanent) to sit and sell my work. It was after the train attack incident that I came back and since then I have not sold any, but I later decided to start going to Wudil Market and nearby markets in Kano to sell.”

He said he hoped to be dependable, be able to cater for his family and to continue paying for his children to further their studies.