Truck drivers conveying food items, timber and other goods pass through a 93 checkpoint-hell through Taraba and Benue states to get to their destination, driving… 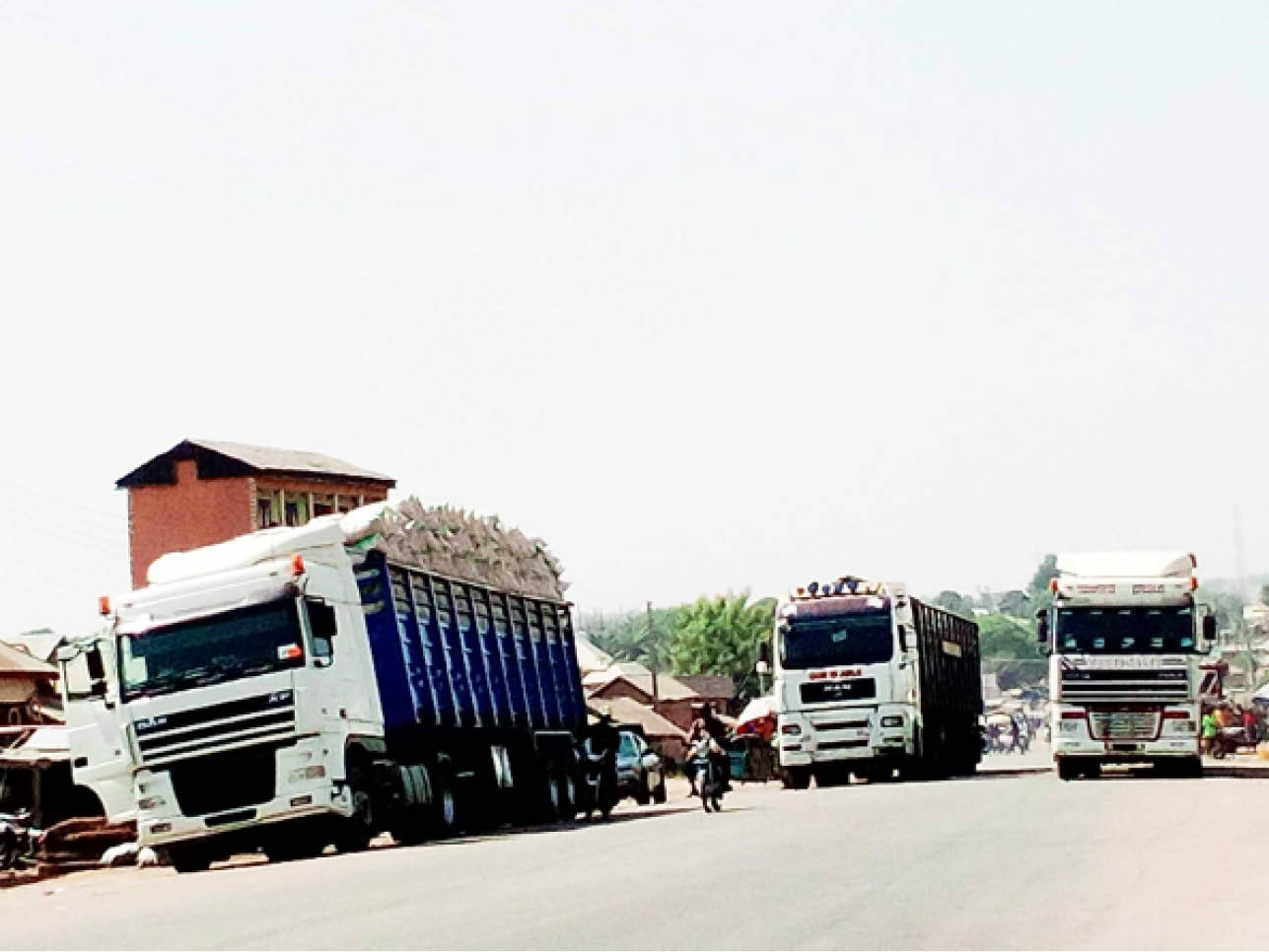 Truck drivers conveying food items, timber and other goods pass through a 93 checkpoint-hell through Taraba and Benue states to get to their destination, driving up food prices and subjecting the drivers to exploitation from corrupt law enforcement agents and thugs, as Daily Trust reports.

Truck drivers have alleged that from the Mutum Biyu Grains Market in Gassol Local Government, Maraban Baissa and Maihula Market in Taraba State to Oguma Junction in Katsina-Ala Local Government Area of Benue State, there were more than 93 checkpoints, where they are compelled to pay illegal fees and revenue along the routes on each trip.

The extortions allegedly forced by Police, Army and thugs have caused hundreds of truck drivers to now divert to Gombe State enroute various states in the South-East, South-West and Abuja other than the Benue/Taraba axis.

Daily Trust findings also revealed that the alleged extortions by security agents and thugs who mount illegal checkpoints on the highway have made movements of vehicles very expensive such that owners of the goods bear the cost.

The findings showed as well that a truck conveying 400 bags of maize or paddy rice costs between N480,000 and N350,000 for transporting the commodity to Abuja, Enugu, Port Harcourt and other states in the South-East and south-south.

Apart from the cost of transport, it was learnt that additionally, N200,000 or more was usually paid to settle security agents and thugs at checkpoints and illegal revenue checkpoints along the Taraba/ Benue routes.

A truck driver, Mallam Umar Muhammed told Daily Trust that 90 per cent of trucks conveying grains and animals from Gombe, Adamawa and Taraba states have abandoned the Benue route because of illegal checkpoints and extortion by security agents who openly demand bribes from drivers.

Mallam Muhammed alleged that truck drivers were often compelled to pay between N500 and N1000 at each of the military and police checkpoints.

Another driver, Buba Adamu, told Daily Trust that truck drivers conveying grains or cattle through Jalingo-Zaki Biam-Oguma Junction are allegedly extorted by security agents who mount checkpoints at a distance of not more than 10 kilometres apart.

He said apart from the police and army checkpoints, there are also checkpoints mounted by produce officers of both Taraba and Benue, as well as illegal roadblocks mounted by thugs along Zaki Biam- Oguma Junction in Benue state.

Buba Adamu further alleged that there are over 90 checkouts and roadblocks from inside Taraba State to the Oguma Junction at either Jalingo-Wukari-Zaki Biam-Oguma Junction or Bali-Maraban Baissa-Takum-Chiwanye-Oguma junction.

According to him, these roads are very vital to truck drivers conveying grains, cocoa, timber and cattle to the Southern part of the country and the Federal Capital Territory, Abuja.

He alleged that in each of the checkpoints, a driver must be made to pay a certain amount before he is allowed to proceed to the next point and if he refused to pay, he would be delayed and in some cases brutalized.

He said at a particular checkpoint, a driver is compelled to pay N15, 000 in multiples of three time to a group of thugs who claim to be produce agents.

“You see, this practice has been on for many years and all efforts to address the problem failed as there is no avenue to route complaints and that is why more than 90 per cent of truck drivers abandoned the road now,” he said.

“ The payment of fees and multiple taxes in most cases is between N200,000 to N250,000 per truck and extortion are committed mostly between the Taraba axis to Zaki Biam and Oguma Junction. This is apart from the charges of the truck, which is between N480, 000 to N300, 000 the owner of the goods is supposed to pay,” he said.

A grain merchant, Mr Micheal Ogbu told Daily Trust that the cost of transport and payment to security agents at checkpoints and charges to middlemen in the grain markets has adverse effects on food prices.

“This illegal payment to security agents and the high cost of transport and the activities of middlemen at grain markets is responsible for the high cost of food items such as rice yam, beans, maize and cows among others in the country,” he said.

Mr Ogbu said the present rates of food items including rice can be lowered if the cost of transport and the payment of illegal fees at checkpoints is addressed.

Daily Trust findings also indicated that over 200 trucks conveying goods passe through from the Taraba route to Benue State to other parts of the country daily but now only a few trucks pass because of the alleged extortion and multiple taxes along the roads.

The chairman of heavy-duty truck drivers in Taraba State, Abubakar Abdu Shago told Daily Trust that as a result of the illegal payments, over 80 truck drivers have abandoned the road.

He said the route through Gombe is longer and fuel consumption is high but is safe and less hassle in terms of payment of illegal fees to security agents at checkpoints and taxes compared to the Taraba-Benue route.

“A truck driver conveying grains or timber through Benue, may pay up to N200,000 and N250,000 to security agents, produce officers and thugs but a driver spends only between N60,000 to N70,000 at checkpoints and for payment of taxes on the Taraba-Gombe route,” he said.

The spokesperson of the Taraba Police Command, DSP David Misal in a text message said the command has not received such complaints.

“Direct the complainants to table their issues before the commissioner of police for investigation,” he said.

DSP Misal stated further that the command sees the issue as a mere allegation.

“Until we hear from the complainants,” he added.

Meanwhile, the Benue Police Command has constituted a task force to monitor the activities of extortionists on the Benue/Taraba roads in the state.

The action, it was learnt, was in response to alleged extortion by security agents and thugs as well as multiple taxes along the Taraba/Benue road in the axis of Joota-Zaki Biam-Oguma junction.

The spokesperson of the Benue command, DSP Catherine Anene told Daily Trust in Makurdi that the task force would also check heinous crimes along the axis.

DSP Anene further said that the task force saddled with the responsibility to clamp down on thugs perpetrating the illegalities became necessary following series of reports received by the command about the nefarious activities.

“This report has reached the command and a task force was constituted on 26/12/2020 to check extortion, multiple taxation and other heinous crimes in the area,” she said.

Recently, the Benue State security council banned the use of motorcycles and illegal revenue checkpoints in part of Sankara axis.

Daily Trust gathered that the Sankara axis consists the three local government areas of Katsina_Ala, Ukum and Logo through which Jootar-Zaki Biam-Oguma Junction on Benue/ Taraba roads pass through.