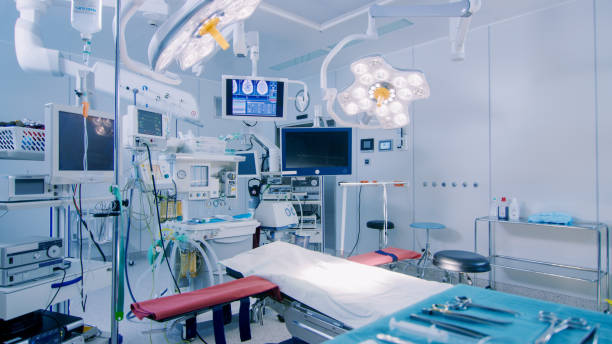 Establishing Shot of Technologically Advanced Operating Room with No People, Ready for Surgery. Real Modern Operating Theater With Working equipment, Lights and Computers Ready for Surgeons and a Patients.

Salisu, an orphan, is staying at a displaced persons camp in Bauchi after being driven out of Lantang in Plateau State following a crisis in the area.

The mother of the child, Aisha Saidu, told North East Trust that little Ibrahim fell into a boiling pot in Kuru near Jos in 2015.

She said the youngster sustained severe burns on his hand which required a major surgery.

“The incident happened in Kuru and all efforts made for his treatment were not successful due the financial condition amidst the death of his father.

“When the incident happened, I took him to the hospital in Vom where they started the treatment but as a result of our poor condition coupled with security situation  in the state, we relocated to Bauchi. When we moved to Bauchi, my last sibling, who was helping us, also died and life has become more difficult as we continue to battle for food and other basic necessities.

“I have made several efforts for assistance from individuals and groups to take him to hospital but it has not been successful. Sometimes if he is crying for pain, I join him to cry as the only way to share his pain.” she said.

Aisha said she worked as a maid to enable her to feed herself and her son but recently, some good samaritans heard about her condition and visited them.

She explained that young men had taken the case to a nearby mosque where they collected  contribution  which enabled her to take the child to ATBU-TH for examination.

She said after conducting an ex-ray, the doctor had recommended a plastic surgery which will cost N250,000.

She added that Salisu was rejected twice for admission into a primary school as the officials said that his condition would not allow him to concentrate and interact with fellow pupils.

The leader of the group sourcing for assistance for Salisu told North East Trust  that the hospital was asking for N250,000 to treat the orphan and has s tarted soliciting  assistance.