On November 1, 2021, a 21-storey building, which was being developed by Fourscore Homes, collapsed in the Ikoyi axis of Lagos State, causing the death… 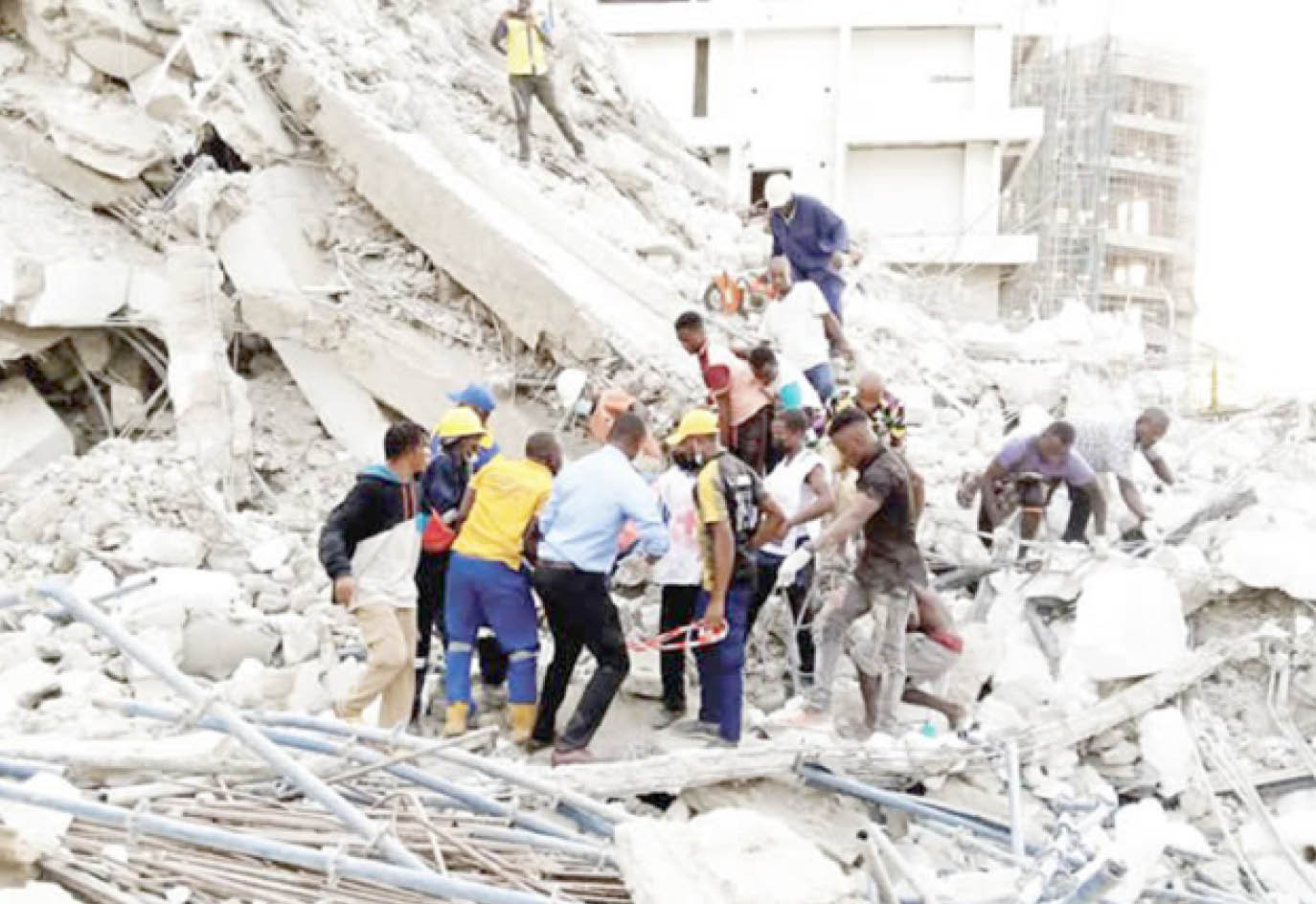 Scene of the 21-storey building that collapsed in Ikoyi, Lagos

On November 1, 2021, a 21-storey building, which was being developed by Fourscore Homes, collapsed in the Ikoyi axis of Lagos State, causing the death of 46 people, while 15 others were rescued.

Femi Osibona, the owner of Fourscore Homes, was among those who died in the incident. The site of the building housed three high-rise structures.

Pantami: How I made Buhari suspend tax on calls, data

Lagos State recorded another major building collapse as a 7-storey building under construction caved in on Sunday morning.

The building, located along Oba Idowu Oniru Street, near Avi Maria Hospital in high-brow Victoria Island, collapsed in the early hours of Sunday.

Six persons had been confirmed dead as of Monday when emergency responders were rounding off operation.

In the preliminary update made available to our correspondents, LASEMA Permanent Secretary, Dr Olufemi Oke-Osanyitolu, said six people were trapped under the rubble.

NEMA expressed worry that work continued at the site of the collapsed building despite the fact that the structure had been sealed by the Lagos State government about eight months ago.

NEMA coordinator, Lagos Territorial Office Ibrahim Farinloye, said the actions of both the owner of the property and the developer clearly violated the state building and control laws.

On August 25, 2022, residents of Kubwa, a satellite town in Bwari Area Council of the Federal Capital Territory (FCT), were thrown into panic after a two-storey building collapsed, killing two persons and leaving five others injured.

The building, which was under construction, collapsed on Hamza Abdullahi Street, off Gado Nasco Road. The incident happened on Thursday night, about 11:30pm.

A three-storey building also collapsed on popular Bende Street, Old Port Harcourt township, Rivers State. According to eyewitnesses, the building, which was constructed several decades ago, caved in at about 2.00am on June 29, 2022.

However, it was said that no life was lost just as there were no occupants in the building.

On Sunday, May 1, a three-storey building  collapsed at 32, Ibadan Street, Ebute-meta, in the Lagos Mainland Local Government area of Lagos State.

According to a tweet by the Lagos State Fire and Rescue Service (LSFRS), the building collapsed about 9:48pm, on Sunday, May 1, 2022. Ten bodies, including those of a mother and her son, were recovered from the rubble, while several others sustained varying degrees of injury.

No fewer than nine victims including a family of seven persons were rescued after a two-storey building under construction collapsed early hours of April 27, 2022 at Area 5 Extension in Umuguma, Owerri West Local Government Area of Imo State. The incident happened around 12:30 Pm.

On November 17, 2021, barely two weeks after a skyscraper collapsed in Ikoyi, a storey building under construction at Flourmill Estate, Magbon, near Badagry, came down, killing four people and injuring five others.

A witness, Oluwagbenga Ogundele, told the News Agency of Nigeria that the building collapsed on nine construction workers on site around 3pm.

Ogundele, who works as security guard near the site, said residents were alerted to the scene of the site.

“The visitor was not in the building when it collapsed. We were able to rescue five alive because they were calling for help, while four of them gave up the ghost,” he had said.

On April 25, no fewer than six members of the Deeper Life Bible Church, located in Iragbo community in Badagry, sustained serious injuries when the church building collapsed during a heavy storm while the service was in progress.

Three persons were confirmed dead and about four others including a security guard and construction workers were reportedly trapped on Saturday, February 12, after a three-storey building under construction on Akanbi Crescent, in the Yaba area of Lagos collapsed. The incident occurred barely three months after a 21-storey building in Ikoyi.

On Saturday, May 21, three persons were confirmed dead and two others rescued after a three-storey building collapsed at 4 Alayaki Lane, Freeman, Lagos Island shortly after a downpour.

The structure which was under construction had been reportedly sealed by officials of the Lagos State Building Control Agency (LABSCA).

But Oke-Osanyintolu said the developer continued clandestine operations mostly at night and over the weekends.

Govt not ready to get it right – Expert

A structural expert, Engr. Victor Oyenuga, has expressed regret that the government was not ready to get it right in the built environment, blaming the recurrence of the incident on the government’s failure to implement many past recommendations on building collapse.

Oyenuga, a former President of the Nigerian Institution of Structural Engineers (NISE), also said the government lacked the capacity to effectively supervise buildings and avoid recurring incidents of building collapse across the country.

He said, “If the building was sealed, why did the people go back to the site? Building is not something you carry out under cover.”

Asked when will the nation get it right in the built environment, he said, “The truth is that the government is not prepared. If the government is prepared, they would have found a solution to it. We have proposed several solutions.”