Eight months after a demolition exercise, officials of the Federal Capital Territory Administration (FCTA) on Wednesday resumed “cleanup exercise” to “save Mpape people from gridlock… 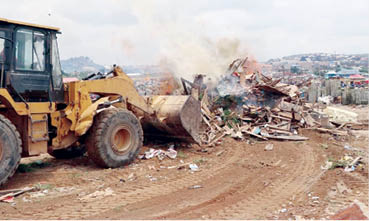 Eight months after a demolition exercise, officials of the Federal Capital Territory Administration (FCTA) on Wednesday resumed “cleanup exercise” to “save Mpape people from gridlock and criminals.”

City & Crime reports that many structures close to the roads were pulled down by the FCTA task force.

The Senior Special Assistant on Monitoring, Inspection and Enforcement to the Minister of the FCT, Ikharo Attah, said after pulling down shanties on the busy road about eight months ago, the illegal structures resurfaced on the road corridors which became a haven for bad eggs in the area.

He explained that the administration received complaints of illegal activities being experienced from Crush Rock area down to the old market side on the road.

He further said that illegal operations in Mpape – which is adjacent to the Maitama District of Abuja – must be checked.

He said, “After eight months, we are back to Mpape because the criminals have returned to the Crush Rock area. We got reports that they are back, so we have to quickly come and clear them.

“We are here to revisit the sanitation exercise, freeing of the road, encroachment and curbing of criminal activities, especially within the Crush Rock area.”