At least 67 people were confirmed dead Sunday when a plane with 72 on board crashed in Nepal, police said, in the Himalayan country’s deadliest… 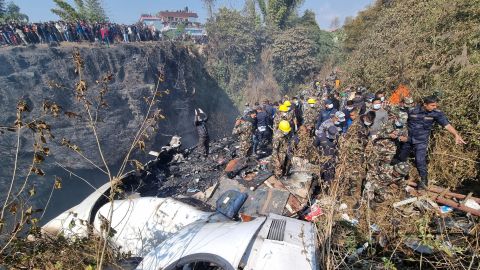 At least 67 people were confirmed dead Sunday when a plane with 72 on board crashed in Nepal, police said, in the Himalayan country’s deadliest aviation disaster in three decades.

“Thirty-one (bodies) have been taken to hospitals,” police official AK Chhetri told AFP, adding that 36 other bodies were still in the 300-metre (600-foot) gorge the aircraft plunged into.

This was partially confirmed by the army, with a spokesman saying 29 bodies had been retrieved and that there were 33 more at the site in Pokhara in central Nepal.

“The aircraft crashed into a gorge so it is difficult to bring the bodies Search and rescue is ongoing. No survivors have been found yet,” army spokesman Krishna Prasad Bhandari told AFP.

One local official said that some survivors had been taken to hospital – but this was not confirmed by either the airline Yeti Airlines or others.

Yeti spokesman Sudarshan Bartaula told AFP that among those on board – 68 passengers and four crew – were 15 foreigners including five Indians, four Russians and two Koreans. The rest were Nepalis.

The flight from Kathmandu slammed into the gorge and smashed to pieces between Pokhara’s domestic and brand new international airport on Sunday shortly before 11:00 am (0515 GMT).

After the crash, rescue workers were hosing down parts of the wreckage of the ATR 72 twin-engine turboprop while smoke drifted out of a ravine as hundreds of people watched.

The area was strewn with what appeared to be parts of the aircraft, including seats.

Footage shared on social media, which appeared to be shot just after the crash, showed raging flames on the ground and black smoke billowing into the sky from debris strewn across the crash site.

Another unverified clip shared online showed a plane flying at a low altitude over a residential area banking sharply to the left, followed by a loud explosion.

Pokhara’s international airport, which opened on January 1 is meant to gradually replace the old one, established in 1958. The city is a gateway to religious pilgrims and international trekkers.