5 Nigerian celebs who made big headlines in 2020

This year is as good as gone with today being Boxing Day and people get to exchange Christmas gifts. Here, Weekend Magazine offers a list… 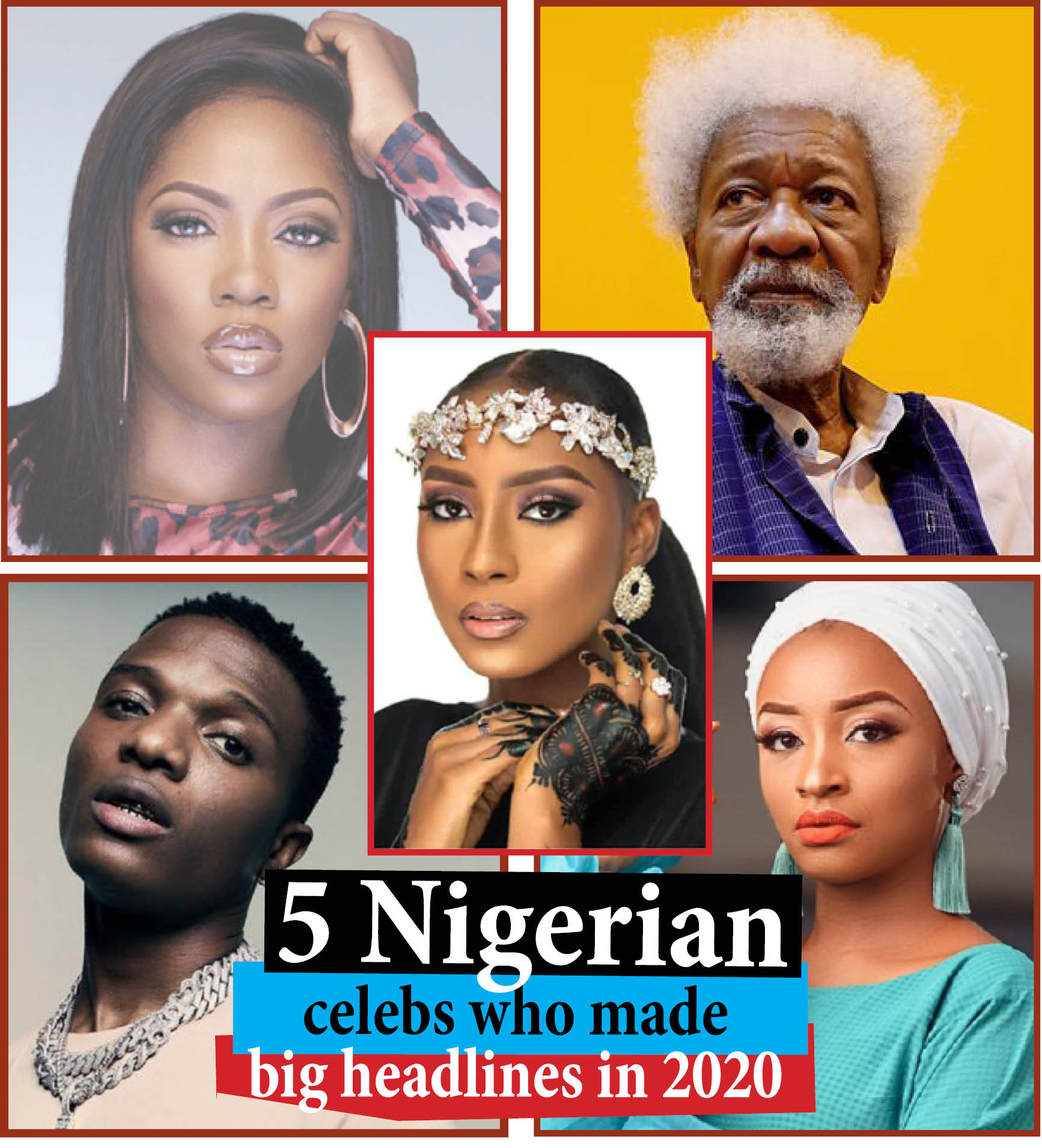 5 Nigerian celebs who made big headlines in 2020

This year is as good as gone with today being Boxing Day and people get to exchange Christmas gifts. Here, Weekend Magazine offers a list of celebrities who created a lot of buzz in 2020.

This actress isn’t new to controversies.

She found herself in one a couple of years back when she featured in Classiq’s musical video and was accused of being in a compromising position by fans, mostly in the North, and particularly the Motion Picture Practitioners’ Association of Nigeria (MOPPAN).

The most recent, however, was when she posted some pictures of herself wearing a dress with an open back on her Instagram and Twitter pages.

Many fans felt the pictures were offensive to the conservative Northern Nigeria society and to Islam, Sadau’s religion.

This wasn’t all. It generated heated debate among fans and, eventually she apologised in a video.

Awarded the Nobel Prize for Literature in 1986, Soyinka has consistently commented on Nigerian politics, but the buzz this year was mainly about his third novel.

Soyinka is known mostly for his poetry and plays. So far, he has published two novels, ‘The Interpreters’ in 1964 and ‘Season of Anomy’ in 1972.

In December 2020, 48 years after, he offered the world ‘Chronicles of the Happiest People on Earth’.

Published by Bookcraft Africa, the 524-page novel tells the story of a pact and an alliance formed between four friends, to make an impactful change in their nation.

Now in the late stages of adulthood, against an evolving political landscape and a change of government, they drift apart, reunite, navigate complex familial relationships, and increasingly gain recognition in their professions —all the while, their paths interweave with those of prominent religious, community and government leaders, and the tide begins to turn against them, with dire consequences.”

Currently, ‘Chronicles of the Happiest People on Earth’ is launching across Nigeria.

Apart from the release of her latest video ‘Park Well’ towards the end of 2020 featuring Davido and all she’s achieved musically this year, the most pronounced is perhaps her appeal to Beyonce in a video to add her voice to the #EndSARS movement that rocked the country.

But instead of a response coming from the American music star, it came from her mother, Tina Lawson.

Beyonce’s mum said Savage shouldn’t have taken to social media but should have reached out to Beyonce through her team on helping with the protest.

She pointed out that her popular daughter was not Nigeria’s political leader or spokesperson.

Before her nude video scandal, Maryam Booth was not a name some Nigerians beyond the North knew.

Yes, she has won awards like the Future Awards Africa Prize for Acting and City People Movie Award for Best Kannywood Actress of the Year, but the release of her nude video online was what really changed everything for the actress.

She claimed he recorded her while she was changing.

However, Deezell had earlier in February instituted a court case against her, saying she wrongly accused him.

Fortunately for the star Kannywood actress, Kannywood rallied round her during this trying time.

The Alhassan Kwalle-led Kannywood Guild of Artiste’s said it wouldn’t ban her at the time and Kwalle pointed out that the whole affair was a deliberate attempt to blackmail her because she didn’t agree to what the blackmailer wanted.

Starboy always has something going for him, but it’s probably different with the release of his long-awaited album ‘Made in Lagos’ in October 2020.

Back to Wizkid’s fourth studio album, ‘Made in Lagos’: The singer who is known for fast-paced dance hall music seems to lie back this time around and do something really different and mellow.

Like he said in an interview on The Norte Show, “I made it for the world.”

Native magazine described ‘Made in Lagos’ in a review “as the most highly anticipated album in contemporary Nigeria music history.” So, it’s no wonder it made The Guardian UK’s 50 best albums of 2020 where it’s described as his most sophisticated work yet.

The Guardian UK’s review reads in part: “He (Wizkid) reinforces the idea that Nigerians do it better.

He still has a global vision, uniting Kingston (Blessed, featuring Damian Marley), California (Smile with HER), London (Skepta, Ella Mai) and home – Essence, featuring Nigerian R&B singer Tems, is a Lauryn Hill-ish stunner, and fellow African giant Burna Boy duets on Ginger. But Wizkid’s sound here is slinkier and more sophisticated than before, with more sexy sax than a Kenny G single – thanks to some pristine production, largely from Nigerian Londoner P2J (and from promising Ghanaian beatsmith Juls on Tru Love).

These are superbly crafted songs for under the sheets, wherever you are, but as Afrobeats continues to grow, Wizkid wants the world to remember where it came from and where it’s going next.”

The Afrobeats star started getting some attention when he dropped his first song, ‘Holla at Your Boy’, the lead single from his debut studio album ‘Superstar’ in 2011.

Years after he became the first Nigerian musician to have over a million followers on Twitter.

It’s not every singer who gets to beat previous records.

But in a year as challenging as 2020, it seems Wizkid may have done just that.