4 mass abductions after Buhari says there won’t be more 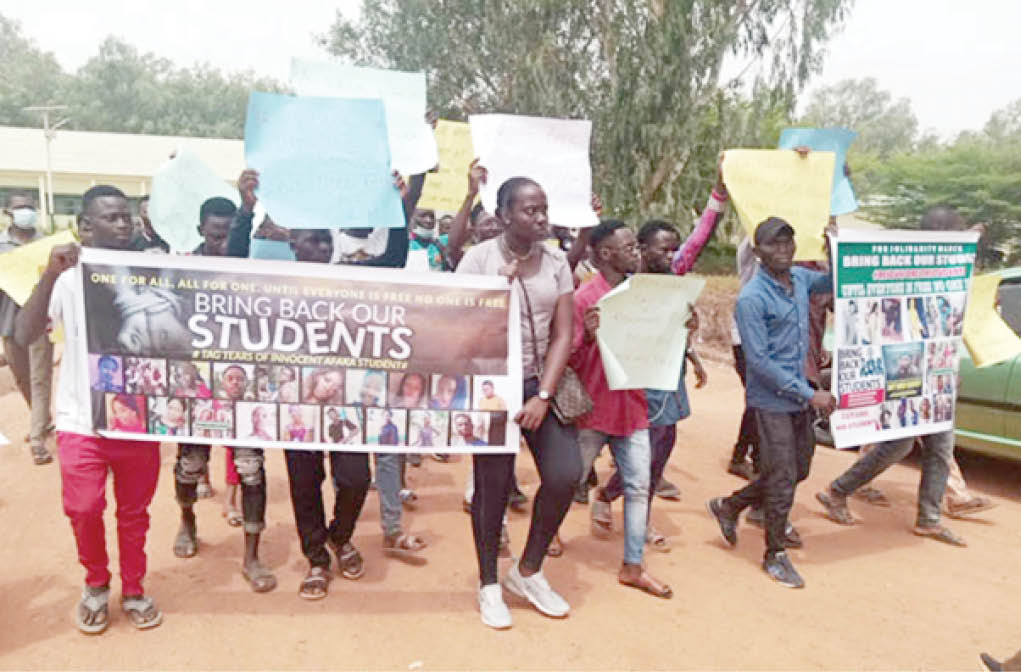 Students of the Federal College of Forestry Mechanization Afaka, protesting at the gate of the school over the kidnap of their school mates Afaka, Igabi LGA of Kaduna State on Thursday Photo: NAN

President Muhammadu Buhari on Sunday, February 28, 2021, said the abduction of students from the Government Girls Science Secondary School (GGSSS), Jangebe, Katsina State, would be the last to happen.

President Buhari spoke through the Minister of Aviation, Hadi Sirika, when he led a federal government delegation to symphatise with the Zamfara State Governor, Bello Matawalle. The abducted Jangebe girls were later released but after the statement of the president, a total of 45 students and four teachers were kidnapped in four reported cases.

Two students and a teacher were abducted at the National Institute of Construction Technology, Uromi, Edo State, last Wednesday, while 39 students of the Federal College of Forestry Mechanisation (FCFM), Mando, Kaduna State, were abducted the following day. The Mando abductors went on to release videos of the victims demanding N500m as ransom.

Another set of students were kidnapped at the UBE Primary School, Rama, Kaduna State, and two students of the Olabisi Onabanjo University (OOU), Ago Iwoye, were kidnapped on Monday.

While the OOU students have been released, their counterparts at the FCFM, Kaduna, are still in captivity; forcing students from the school to protest their continued stay in captivity.

Following these abductions, some security experts have expressed resentment on the statement of the president albeit by proxy.

A Peace and Security expert, Dr Jimoh Ahmed Ayinla Agaka, said the pronouncement of President Buhari was a mere statement which any other individual could make, but however urged the newly appointed service chiefs to do the needful.

Dr Agaka said, “Just last week the National Security Adviser (NSA) to the president raised an issue on the purchase of ammunition and other war equipment,” adding that, “Training and retraining of personnel in the forces should be embarked on, incentives and life insurance should be made available to warfighters. And lastly, those involved in the crime should be exposed and be made to face the wrath of the law no matter those involved in the nefarious acts.”

A retired Director of the Department of State Security (DSS), Dr Abdulsalam Bolakale Suleiman, said the statement of the president would amount to nothing if new techniques were not adopted in tackling the present-day security challenges.

Dr Suleiman said the management of schools’ security should not be left in the hands of civilians like principals and others and that a 24-hour positioning of security men, especially in boarding schools, should be available.

He said, “One major reason kidnapping is thriving is because of the ransom being paid. Another issue is the negotiation; and I don’t know why any reasonable government or individual will think negotiating with criminals will be the solution. If you hold negotiation with those in Zamfara today, those in Ondo will rise up tomorrow and it will continue unabated.”

He further said, “Let me draw your attention to the attempt by the Eighth Senate that took the Peace Corps Bill to the second reading and it almost scaled through before it was killed by some people. The bill would have been the ideal paramilitary agency that would have taken care of our schools because the protection of schools would have been their major function and responsibility.”

He said there was a need for a rethink about the internal security arrangement in Nigeria because, “The numerical strength of our security personnel is grossly inadequate to man some strategic places and points in Nigeria.

“In the past, recruitments of policemen, SSS and soldiers were on a quarterly basis. But now, Nigeria’s population is increasing daily without a proportionate number of security men that can take care of our situation. And government is not paying attention to what they should otherwise do. What stops them from getting tracking machines against kidnapping for every state that will locate, identify and bring out the pictures and activities of kidnappers wherever they are.

“There is no way we can succeed without the integration of community policing in Nigeria. Community policing is so critical to solve this issue because of the advantage of intelligence gathering. Agreed, criminality cannot be eradicated or prevented, but it can be reduced through this.

“I worked closely with a Commissioner of Police (CP), Olushola Amore, when I was Special adviser (SA) on Security to the immediate past administration on in Kwara State and community policing assisted us immensely.”