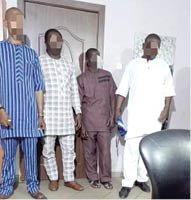 Four men who were caught on camera stealing from a shopping mall in Surulere area of Lagos have been rescued by the police from a mob.

Babatunde Ogunsemi (48), Olatunde Ayinde (50), Oludare Olusegun (49) and Sunday Ebifega (41) were almost set on fire by the mob for shoplifting at a supermarket.

It was learnt that members of the shoplifting syndicate had ventured into the supermarket and attempted to steal before they were caught on camera.

Lagos police spokesman, Benjamin Hundeyin, said preliminary investigation revealed that the suspects were once captured on CCTV on September 1, 2022, while shoplifting six bottles of Martell Blue cognac from the same supermarket.

Hundeyin said one of the suspects, Sunday, had been previously charged to court in 2021 for shoplifting.