34 fathers raped 48 own children in 2yrs

In the last two years, more than 48 children have been raped by their 34 biological fathers, a data compiled by Daily Trust Saturday has… 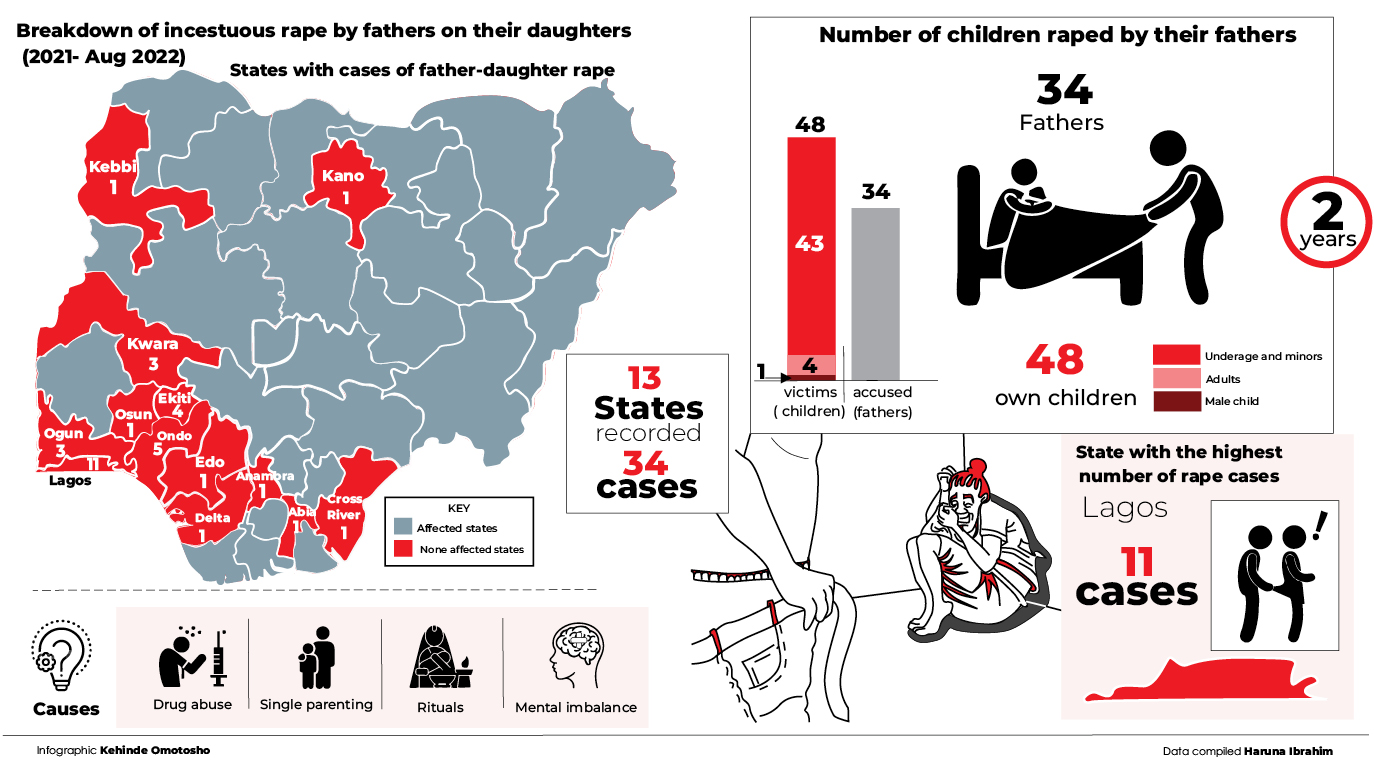 In the last two years, more than 48 children have been raped by their 34 biological fathers, a data compiled by Daily Trust Saturday has shown.

The incidents happened in 13 states, with Lagos leading the chart with 11 cases, Ondo 5, Ekiti 4, Kwara 3, Ogun 3, while Abia, Anambra, Kano, Delta, Osun, Edo, Kebbi and Cross River have one each.

Based on the statistics, out of the 46 incidents, one is a male child and only four were adults, the rest are underage and minors, including a 15-month-old child.

Latest among the cases was in August 2022, when a 55-year-old security guard, Arowolo Ayodeji, confessed to having carnal knowledge of his 19- years-old daughter twice in Ipoti Ekiti, Ekiti State.

The incestuous father blamed the devil for the act, saying, “I didn’t do it intentionally.”

The spokesman of the Nigeria Security and Civil Defense Corp (NSCDC) Olasunkanmi Ayeni, revealed that the man was said to have started molesting the girl while she was seven years old.

“It means that the crime had been running for two years,” Mr Ayeni said.

On February 19, 2022, a 28-year-old man, Audu Dare, who raped his six-year-old daughter, which caused her death, was remanded in a custodial centre in Ado Ekiti.

Dare’s estranged wife, Eniola Aina, told the police that she got married to him some years ago and the marriage was blessed with a child, but she left his house four years ago due to his nonchalant and carefree attitude.

“On one fateful day, he came to my house in Ilawe Ekiti and requested to take out my daughter and I obliged. He returned the girl around 12am and left.

“Shortly after that, she began to complain of headache and ache in her private part. She was taken to a nearby hospital, where she told me, ‘My father raped me.’ She eventually died on the second day.”

In another incident, a father of six, Sunday Julius, was also arrested by the police for defiling his four biological daughters, aged seven, 10, 11 and 15, in Lagos State.

Julius, said to have been living with his family in a room apartment in the Alimosho area of the state, was caught many times in the act by his wife.

“We got married in 2007 and have six children together.

“Our first daughter, who is now 15 years old, reported to me seven years ago that whenever we were asleep at night, he would sneak to where she slept, lie on her and fondle her private parts.

“Again, my second, third and fourth children (all girls) also complained to me that when I went hawking, their father molested them.

“He usually did it in the middle of the night when I was fast asleep. They said he always threatened to harm them if they revealed the secret. I caught him recently at night. We both slept in the same bed but he stood up, turned off the light and sneaked to the spot where our 10-year-old daughter was. The following morning, I told him that I saw him fondling the girl, but he denied it. For four days, I didn’t give him food and he started beating me,” the 36-year-old woman, who sells herbal mixtures, said in Yoruba.

The man’s eldest daughter, 15, who is in Senior Secondary School 1, also revealed that her father first defiled her one evening when she came back from Arabic class.

She said, “I wanted to remove my clothes when daddy entered. He made me lie on the bed and molested me.

“My aunt came in and he quickly let go of me. She later asked what happened and I explained to her that my daddy had been sleeping with me for some time. My aunt told my mum. She (mum) blamed me for not informing her on time. I was afraid to tell anyone because daddy threatened to kill me. I didn’t know he was sleeping with my siblings too.”

Two other siblings aged seven and 11 said their dad sexually harassed them twice in the night separately and warned them not to tell anyone.

The 10-year-old girl among them said her father had molested her “many times at night.”

Asked why they didn’t scream for help, they said their father usually shushed them up or covered their mouths.

In another incident in Ile-Oluji town, Ondo State, a father, Sunday Udoh, 38, a policeman, was arrested trying to force his daughter to commit abortion after he impregnated her.

The police public relations officer, Ondo State command, Funmilayo Odunlami, said they arrested the suspect at a health centre in Ile-Oluji, where he had allegedly gone to get an abortion for the pregnant girl.

“During investigation, it was revealed that the suspect was attempting to procure abortion for her daughter (name withheld) of about 15 years old, whom he had been sleeping with.

“The case is currently being handled by the Gender Office of the State Criminal Investigation Department in Akure,” he stated.

A week earlier, the police in the state arrested a 27-year-old father, Adeniyi Adeleke, for allegedly raping his 10-year-old daughter.

The police said investigations showed that Mr Adeleke carried out the act for ritual purpose.

Also, a 46-year-old man identified as Jimoh Rafiu was arrested for allegedly defiling his 6-year-old daughter over the excuse that his wife refused to have sex with him.

Exposing the ill, the victim informed members of the Advocates for Children and Vulnerable People’s Network that she had been repeatedly defiled by her father.

The victim’s mother said that whenever she returned from work, her husband usually removed his daughter’s clothes on the excuse that she needed fresh air.

However, after showing signs of pain in her lower abdomen and between her legs while taking a bath, the victim was queried by her mother, who later confronted the man based on the account of the child.

The child’s father confessed to committing the act and promised to stop it.

However, after several days, the little girl could no longer bear the pain in her lower abdomen, a situation that made the mother report the case at Idimu police station, which led to the arrest of Jimoh.

It was gathered that Jimoh confessed to committing the crime but blamed it on his wife’s refusal to sleep with him, and the influence of alcohol.

Many people who reacted to these incidents wondered why men would engage in such abominable acts, which are also against the laws and  cultures of the land. They called on states to promulgate laws that would recommend stiffer punishments against the culprits, including life imprisonment, death sentence and castration.

Deciding one of the cases recently, the Ikeja Domestic Violence and Sexual Offences Court sentenced Michake Ogbar to triple life imprisonment for raping his three daughters, aged 10, 20 and 24 in Lagos State.

Pronouncing the judgement, Justice Abiola Soladoye said, “The evidence before the court shows that the prosecution has proved the case of defilement and rape before this court.

“The defendant, who is the father of the three daughters, is found guilty as charged, as the burden of proof has been discharged. This is a very sad case. It is a disgrace to parenthood.

“The defendant ravished his own daughters in turn, committing incest. It is rather shameful and most perverted.

A psychologist, Mahmuda Sarki, said that social, environmental, psychological and psycho-social factors were the main causes of such incidents.

“Many things can cause this, but lack of parental background, drug abuse, single parenting, indecent dressing, lack of self control can easily trigger it.

“In most cases, the men abuse drugs and commit the act, not in their senses, especially when the girls’ mothers are divorced.

“Some fetish fathers rape their children for ritual purposes, while some have mental imbalance. These are just a few causes,” he said.

On the solution to the problems, he said non-governmental organisations should intervene to ensure that offenders are punished.

He called on parents to discourage indecent dressing and educate their children on how to resist rapists and speak up in the case of such advances.

He also advised that Islamic and Christian clerics should preach against rape, and called on psychologists to embark on sensitisation.