30 days after, family of Jos taxi driver killed by soldiers cries for justice

His children were last week sent home for not paying their first term school fees. He was said to have owed the remaining payment of… 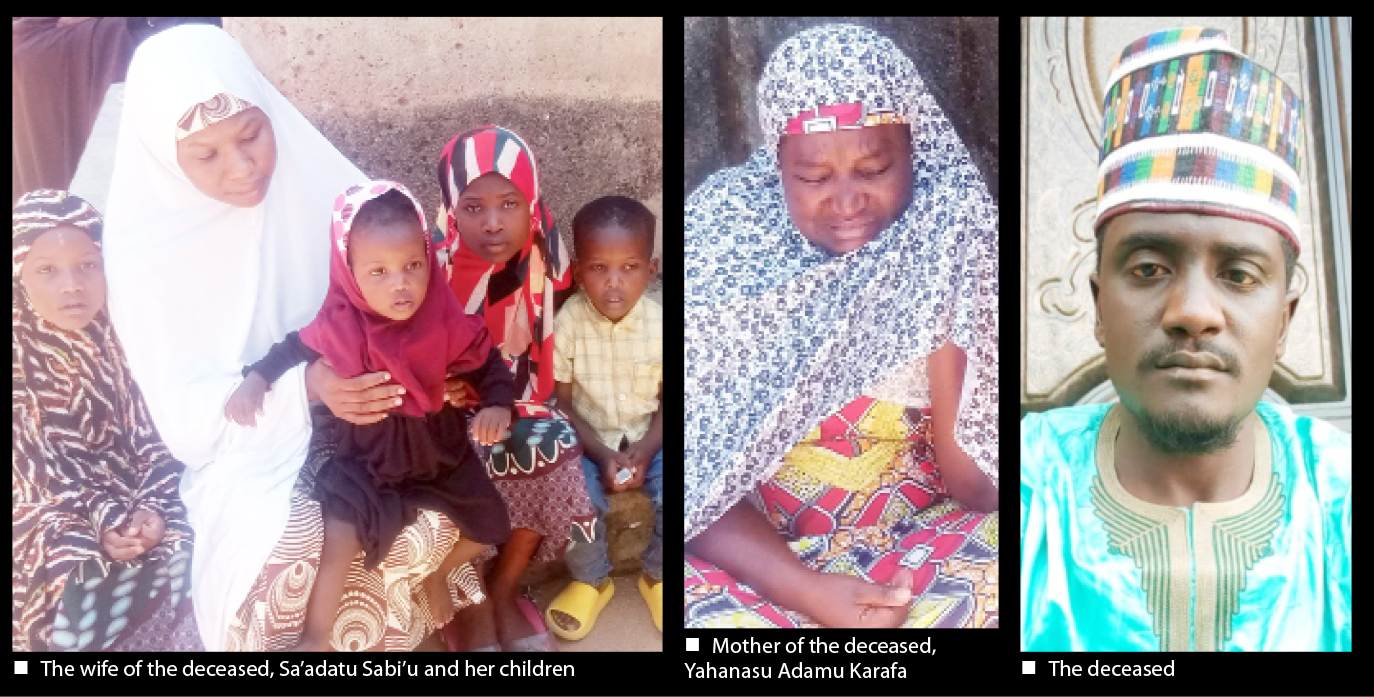 “His children were last week sent home for not paying their first term school fees. He was said to have owed the remaining payment of his children’s school fees for last term (third term) before he died.

“He was hoping to settle all the debts upon resumption for the new academic year,” Sa’adatu Sabi’u, wife of the taxi driver, Sadiq Adamu Karafa, who was allegedly beaten to death by soldiers in Jos, the Plateau State capital, said.

On September 11, when Sadiq Abdullahi Karafa went out for taxi work, he had no premonition that it was the last day he would ply his usual Jos-Mangu road in search of livelihood.

It was a Friday evening after returning from Mangu LGA for the day’s work, less than half a kilometre to his house, when soldiers attached to Operation Safe Haven (OPSH), a multi-security task force maintaining peace in the state, stationed at Farin Gada Market, stopped him and beat him to death for an offence that the OPSH had yet to explain at the time of filing this report.

The corpse of the deceased that was first brought to Laranto Police Divisional Headquarters, indicated that he was beaten to death with many parts of his body showing injuries and wounds. The video of the nature of the killing of Sadiq, which went viral had generated condemnations from within and outside the state.

OPSH, under which the accused soldiers were attached, also condemned the act and promised to bring to justice those involved in the killing of the taxi driver.

In a statement by the spokesman of OPSH, Major Ishaku Takwa, on September 12, said: “OPSH received with shock a report of security personnel of OPSH deployed at Farin Gada, that beat and murdered a commercial taxi driver Mr. Sadiq Karafa.

“Immediately the report was received, the Commander Operation SAFE HAVEN, Major General Ibrahim Ali, visited the bereaved family and condoled with them over the unfortunate incident. The commander has since constituted a board of inquiry to unravel those behind the heinous act. He assured that those who would be found culpable will be made to face the full wrath of the law, “ the OPSH added.

Abdullahi Adamu Karafa, an elder brother to the deceased described the killing as unfortunate, saying that his brother was killed and no explanation was given to them as to why he was beaten to death and didn’t know what the Nigerian Army would do to the soldiers who killed his brother.

Abdullahi said when Sadiq was killed on Friday night, the corpse was deposited at Plateau Specialist Hospital where it stayed for four days before they buried him, saying they delayed the burial to gather facts to challenge the matter in the court but “we were later compelled to bury him as the command will compensate the family of the deceased but nothing has been done.”

Abdullahi added that the deceased, who left behind a wife, four children and his mother, was the breadwinner of his family who went out every day for work before he provided food for his family. He called on the commander to ensure justice for his brother.

My last moment with my husband – wife

Sa’adatu said conversation ended between her and Sadiq on the day of the incident and still remembered how caring he was to her.

She said, “I remember the last time we spoke. He called me around 4pm that Friday and we discussed a lot before he put off the phone. He often returned home at most 9pm but that day he stayed longer. I didn’t know that all was not well with him.

“When it was 10pm, I dialled his no, it was not going. When it was 11pm, I redialed the number again but still, it did not go through. From then I concluded that all was not well with my husband because it was unusual of him to stay longer than 9pm.” she said.

When Sa’adatu was busy trying to know the whereabouts of her husband, she didn’t know that Sadiq was already with the soldiers receiving unwarranted punishment that led to his death.

“Though my mind wasn’t at rest at 11pm, I then decided to go to bed and wait what could have happened to him but I couldn’t sleep. Early in the morning, I called his line but still, it was not going through. Unknown to me, his brothers were called by a family friend who witnessed when the soldiers were dragging him from his car and he was calling him to come to his aid. But I wasn’t told about what had happened,” she said.

“They refused to tell me because they didn’t want to get me worried especially that it was already night,” she said.

Sa’adatu said immediately she received news of the death of her husband, she was thrown into confusion and almost lost her mind. She said she felt hopeless considering the kind of person he was to her and the entire family.

“I was shocked by the news of his death. My father had died too but I was not as badly hit with the loss as my husband’s death. His death has touched me psychologically. I will never forget this situation in my entire life,” she said.

“At his level, he provided the little he could do to make us happy. We were never hungry for even a day. He was always up and doing to ensure that whatever he got, he helped the family. Even before the day of the incident, he had already bought things for our tea break because, in the morning, his elder brother brought them from his car.

I missed my husband for everything

The widow who said she misses her husband, she would live to remember him for many things, adding that she enjoyed staying with him. She said “But I feel pity for my children. Food has become on and off because nobody is there constantly to provide like before.

“The tuition of my children is another thing that will be lingering in my head especially when they are at home. Their schooling will be a big problem. When he was alive, he didn’t live them on the street. He took all of them to school.”

She said though her husband wasn’t rich, he tried his best to pay his children’s school fees and looking at how difficult life is now, coupled with the current economic reality, she didn’t know what would happen to the future of her children. She said “we don’t know our fate any longer. I pity my children.”

Immediately after the incident, the OPSH’s commander had visited the house of the deceased and promised to compensate the family but Sa’adatu said “since he left, they have not heard from him again. The family wasn’t compensated. We have not been told what he could have done to his killers and we are beginning to see that justice might not prevail.”

The widow further said she was waiting to see when the perpetrators of the killing would be brought before the law as promised by the commander of the operation, adding that “those who committed the offence know that what they did is wrong. Let them be punished as well according to the law of the land. I appeal to the commander to ensure justice because Allah is watching them.”

For the deceased’s mother, Yahanasu Adam Karafa, who is currently battling with stroke, she would never forget that Friday, particularly when the news of her son’s death was broken to her.

“I cannot quantify the loss of Sadiq with anything. I have lost. I am not well and whenever my doctor gives me an appointment, he always drives me to Jos University Teaching Hospital to see the doctor. Who will do this to me now? What did he do to deserve to be beaten to death by soldiers? It is unfair, “ the mother said in tears.

She however called on the commander to ensure justice is done without delay as justice delayed justice denied, noting that they (soldiers) have made his wife a widow and his children orphans.

She said “we need justice. We need justice. We were compelled to bury him so as to initiate discussion on what to be compensated but nothing has been done. Are we saying that his blood has gone free? the mother asked.

Yahanasu Sadiq, a daughter of the deceased said she remembered when their father would use his phone to show them a lot of amazing videos and pictures and would always take them to school in the morning before going to his work.

When contacted, the spokesman of the OPSH, Major Ishaku Takwa, on what the command was going on the matter as well as the compensation promised by the commander, said “there is nothing to wait about. Those soldiers are still in detention and going to be charged in accordance with military law. No need to rush let’s wait for the board of inquiry.”