3 years after unveiling, Nigeria Air yet to fly

Exactly three years and one month after the unveiling of the name and logo of the proposed national carrier known as Nigeria Air, the airline… 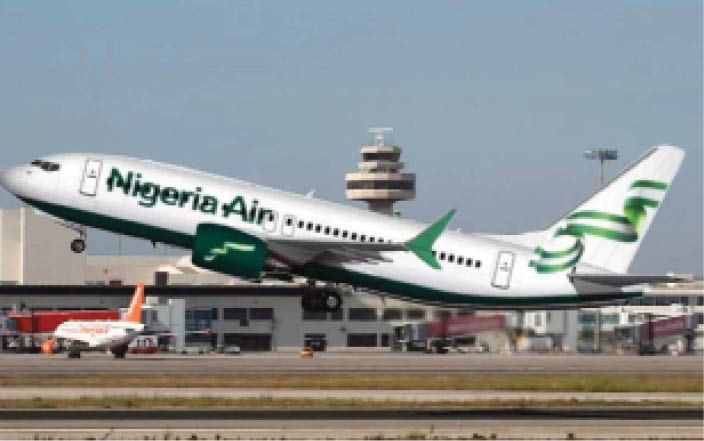 Exactly three years and one month after the unveiling of the name and logo of the proposed national carrier known as Nigeria Air, the airline is yet to take off.

While the federal government is insisting that the national carrier would come on stream next year, stakeholders and experts in the industry doubt the possibility with just a five percent contribution from the government.

Daily Trust reports that the Minister of Aviation, Senator Hadi Sirika had on July 18, 2018, unveiled the name and logo at the Farnborough International Airshow in London hinting that the airline would begin operation in December 2018 with 20 aircraft.

However, three months after, precisely on September 20, the Federal Executive Council (FEC) announced the suspension of the project.

Since then, the minister has insisted that the project is not dead even as he set a 2022 timeline for the delivery of the national carrier, which is a major project under the Aviation Masterplan.

Sirika said the carrier would be completely private sector driven with the government having as small as five percent stake.

But three years later, there is still uncertainty over the project fuelling doubts, misgivings over the seriousness of the government to float the airline.

In May this year, the federal government said it expects private investors to raise $250m for the proposed carrier as it insisted the project would be delivered before 2023.

In the document, which gives an update on the national carrier project and other sub-projects in the roadmap, the Ministry of Aviation explained that the project development phase has been completed.

But an aviation stakeholder, Capt. Alex Nwuba, had said the project was dead on arrival. He however told our reporter that to make it a reality, the government must own the airline 100% at the start.

“There is no point calling it a national airline when the government owns 5% and foreign interests own more than 10%. Government must take responsibility for the startup and funding of the airline from the get-go.”

He also advocated the appointment of a nine-man independent board of directors and subsequently two executive directors from the airline’s management to oversee the running of the airline.

Still on this, Principal Partner, Avaero Capital Partners, Sindy Foster said the national carrier project is not realistic, stating that it shouldn’t be a priority.

“I feel that the Nigerian policymaker would do better by using this COVID period as an opportunity to fix the issues with domestic aviation so that Nigeria can launch international airlines from Nigeria and designate those airlines as flag carriers.”

But Mr. Chris Aligbe, the Managing Director of Belujane Konzult, an aviation consultancy firm, noted that the project is still feasible despite the seeming delay.

“The minister has said by the end of the first quarter of next year, it would come on stream. The truth is that floating an airline is not an easy thing. In a federal system, the president doesn’t call the shots as it were but he has to work through various committees.”