At least three persons were killed and many others injured as an obaship tussle turned bloody in Agosasa community in Ipokia LGA of Ogun State.… 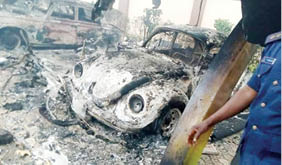 At least three persons were killed and many others injured as an obaship tussle turned bloody in Agosasa community in Ipokia LGA of Ogun State.

Our correspondent gathered that some residents went violent over who becomes the next monarch of the town, thereby turning the community into a battlefield.

City & Crime learnt that after the death of the first Oja of Agosasa, Oba James Elegbede, in February, 2022, the community has since then been thrown into a crisis over who succeeds him.

Sources told our correspondent that the crisis reached a climax on Sunday when the youths took to the streets to warn against the installation of an “unpopular candidate” as the next oja.

A resident said, “The intervention of soldiers, policemen and traditionalists helped to stop the crisis on Sunday evening.”

It was further gathered that the situation, however, got out of hand on Monday with the murder of one Nafiu Amosun who was said to be the closest ally to the candidate being supported by the youths.

The youths alleged that the said Nafiu Amosun was shot dead near the Afa River by the other faction and that triggered the Monday chaos.

On Monday evening, houses and vehicles belonging to Akeem Adigun, a former council chairman and aide of Governor Dapo Abiodun; Isiaka Aderounmu and others were set on fire by the youths.

Also, two more persons were said to have been killed, making a total of three lives lost in the melee.

Another source said, “At the moment, Agosasa is like a ghost town with a heavy presence of soldiers and policemen.”

It was further gathered that chiefs and elders of the town are also on the run for fear that their houses might be torched.

The spokesman of the command, Abimbola Oyeyemi, said, “The incident in Agosasa is an obaship tussle. Unfortunately, one person was shot. We learnt that some houses and vehicles were razed. But our men are there on ground. The operation is being led by the Deputy Commissioner of Police, Operations. Normalcy has been restored and our men are on ground to forestall further escalation of the crisis,” noting that arrests had been made.