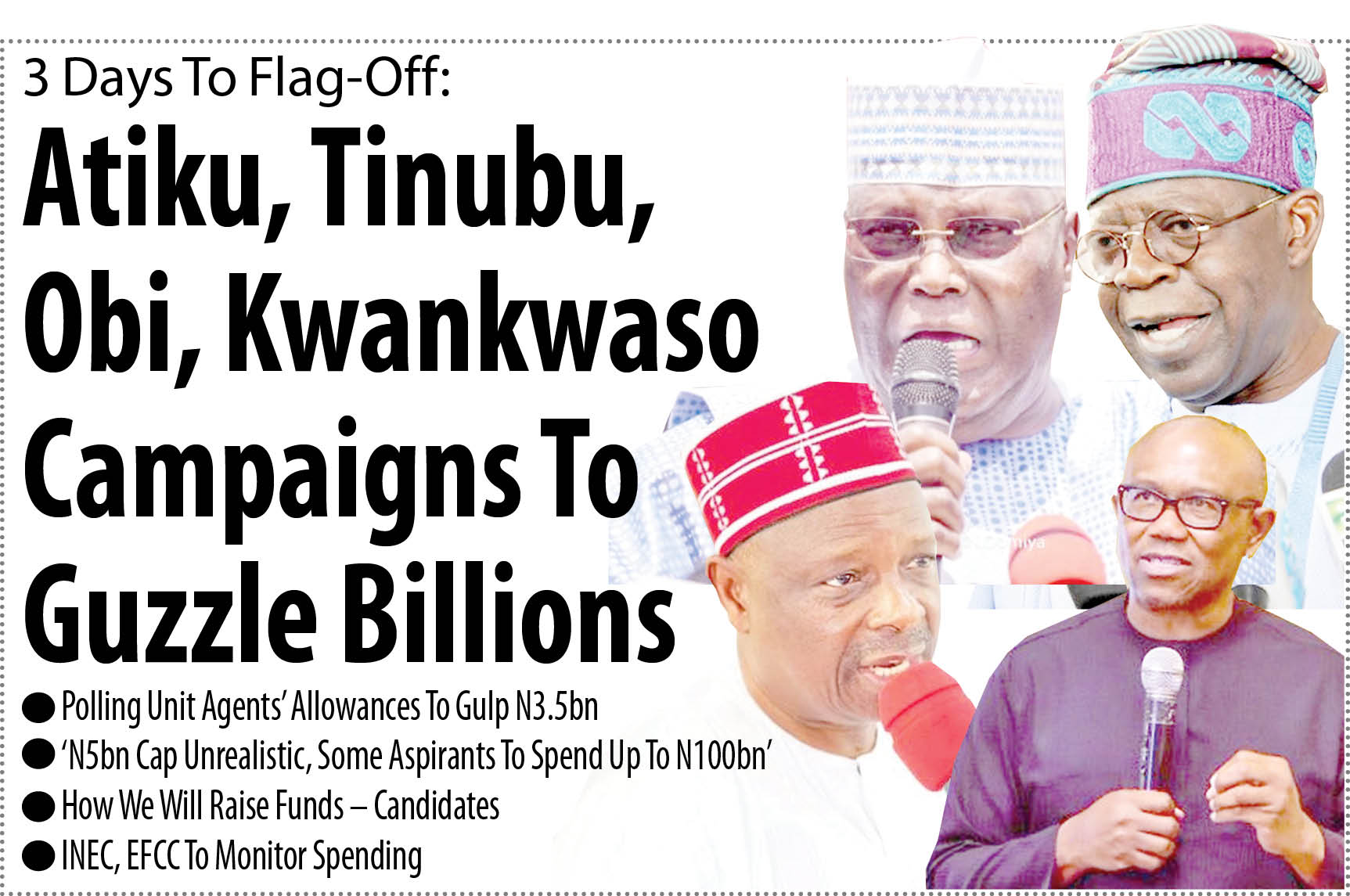 Eighteen political parties have fielded candidates for the presidential election, slated for February 25, 2023 by the Independent National Electoral Commission (INEC).

Daily Trust on Sunday reports that the pendulum is swinging towards Atiku, Tinubu, Kwankwaso and Obi, who are of the Peoples Democratic Party (PDP), All Progressives Congress (APC), the New Nigeria Peoples Party (NNPP) and the Labour Party (LP), respectively.

The electoral body has fixed September 28 for the commencement of the public campaign for the presidential and National Assembly elections. Candidates have reportedly commenced the mobilisation of funds ahead of the campaigns.

Section 88 (2) of the 2022 Electoral Act pegs the maximum election expenses to be incurred by a candidate at a presidential election at N5billion, while subsection (9) of the same provision stipulates that a candidate who knowingly acts in contravention of this section commits an offence and is liable on conviction to a fine of 1 per cent of the amount permitted as the limit of campaign expenditure under this Act or imprisonment for a term, not more than 12 months, or both.

However, top chieftains of parties, campaign committee members, political actors and pundits have predicted that the campaign spending of 2023 would be higher than that of 2019, in view of the high stakes and price fluctuations due to inflation.

Daily Trust on Sunday reports that the ceiling for campaign spending had been disregarded in the past, with parties and candidates exceeding the limits due to lack of enforcement capacity of the authorities.

It would be recalled that the spending for the presidential campaign was N1 billion in 2019. It was, however, reviewed to N5bn this year during the amendment to the Electoral Act by the National Assembly.

Chieftains of parties, including those who have been penciled down to serve in the campaign committees of the ruling party and the leading opposition, said that to successfully prosecute a presidential campaign, over N100 billion would be required.

They listed the key expenditure to include nationwide rallies in states, publicity, transport, logistics, security and mobilisation on election day.

The candidates are expected to kick-start their campaigns with a flag-off and follow it up with rallies in states. It is expected that the candidates would visit each of the 36 states and the Federal Capital Territory (FCT) to promote themselves.

A chieftain of the ruling party who had participated in three presidential campaigns said the expenditure on rallies include chattering of aircraft, hiring of venues, vehicles, mobilisation of supporters to the state capital (venue of rallies) and handouts to traditional rulers and other stakeholders during visits.

“There is no how over N500 million would not be spent on rallies in each state. Because you want to intimidate your opponent, you will mobilise from even neighbouring states for you to have the desired crowd,” he said.

This is described as the tonic and lubricant of the campaign by an ally of one of the presidential candidates.

During a chat, he said that for a start, his associate had budgeted N2 billion for publicity because of the importance he attached to it.

Breaking down the provision for publicity, he said it included banners, posters, t-shirts, advert placement on local, national and international media outfits, jingles, commercials, engagement of musicians, appearance on television, publication of articles and engagement of social media influencers, among others.

A member of the National Executive Committee (NEC) of the APC, Yekini Nabena, however, said, “Politics is all about interest. If you are selling a product, people will know whether your product is good for them to buy or not.

A source said, “They (APC) believe the bullion van is still there; the bullion van will surface again in a bigger form. I don’t think Mr President has an interest in sponsoring the APC campaign. I believe everyone is thinking that Bola Ahmed Tinubu has the enormous wealth to play around with.”

A top member of the PDP said that the party understood what it takes to campaign and what it involves.

“I can’t tell you the exact amount, but billions of naira is required. But having said that, I believe the party and Atiku are equal to the task. He (Atiku) has travelled to Dubai and Europe on a business trip; you know he is a businessman. I believe it is part of the preparation for the campaigns.

“The only challenge I can tell you is the problem in the party between the national chairman, Iyorchia Ayu and the Rivers State governor, Nyesom Wike. But I believe that with the campaign council in place, the party has passed that stage. What Wike fails to bring on board, Okowa can do for the party,” he said.

The biggest of all, according to top party chieftains, is the expenditure on election day. The expenditure, they said,  would start with the mobilisation of state coordinators.

An APC member in the North said the N5 billion threshold was a mockery of democracy, saying the amount cannot prosecute a governorship election, even in small states like Bayelsa and Zamfara.

“Let me give you an example. In 2019, during the governorship election in our state, the governor spent N2.5bn on election day to ensure that each polling unit was delivered. The 2023 campaign would be the most expensive in the history of the country, looking at the way the primaries of the two major political parties were conducted,” he said.

For the two agents to be deployed to 176,846 polling units across the country, the candidates are expected to spend N3.5 billion if each of the agents would be given a N10,000 allowance.

“In addition to the polling units, you would mobilise top shots of your party, including commissioners, ministers, senators, members of the House of Representatives, state assembly members and appointees to deliver their areas,” he said.

With the new trend of vote-buying especially as witnessed in recently conducted off season elections, the election day spending for candidates could be much higher.

How we will raise funds – Candidates

The APC national publicity secretary, Felix Morka, a lawyer, said the party would raise funds through donations by well-to-do members, adding that it would determine methods of fund-raising as the campaigns progress.

“Yes, the campaigns commence in few days and would continue until the timeline expires before the elections. So we have a significant time to raise funds paigns. Fundraising is a programme, it is a process. Funds are raised routinely, by donations.

“We have over 40 million members who are encouraged. I believe that in the course of the campaigns, the party would decide on other methods, activities or events to raise funds.

“Right now, we are in that mode; we are thinking, planning and hoping that we would get the resources to execute all the activities ahead of the elections next year,” he said.

A member of the APC  National Caucus, Chief Sam Nkire, told our correspondent that the party would raise funds legitimately, adding that the campaign spending of 2023 would be higher than that of 2019.

“There is a program already in place for that. After the inauguration, I believe they would immediately go into their first meeting. From the meeting we will get a direction on how they are going to push forward.

“There is a finance committee, so I would not know what amount would be involved; I don’t deal with money. Everybody has their responsibility; my work is cut out for me.

“I believe they already have a plan in place for the implementation of their work,” he said.

On his part, the national publicity secretary of the LP, Comrade Arabambi Abayomi, said their expenditure would be within the threshold of the electoral act.

According to him, N5 billion, in all considerations is a very huge sum of money, which in every measure is adequate to campaign for any political party not harbouring a desperate and hidden agenda.

“Every election year, for every active and contesting political party, it is usually money and resources costing. However, with the LP, it is quite controllable and relatively easy to manage all the needful expenses on a campaign within the provisions of the constitution.

“There are all kinds of expenses that differ from party to party. For the LP, it is very standard to only get engaged in expenses relevant to publicity and the acquisition of campaign sites, electronic address system to cover the campaign ground, including travelling costs; that is about all.

“The LP doesn’t provide or earmark money for vote buying and its partner stomach infrastructure. In the LP, there is no plan to influence or cheat the process before or during elections.

“Raising funds for the campaign in the LP is inevitably guided and limited by the fact that the main support base of the party is much largely farmers, artisans, working class, students, women, professionals and all other citizens of Nigeria who accept the ideals of social democracy. This doesn’t mean that some members of the LP are not buoyant and financially blessed.

“The LP would raise funds within the available circle of its friends and well-wishers who share its aims and mission within the country and in the diaspora,” he added.

In his submission, the spokesperson of the NNPP, Major Agbor, said N5 billion was not needed for the campaign.

He said, “The first question is: What is the N5 billion needed for? The NNPP does not, and will never be involved in vote buying, and so, does not require such humongous amount to win. We believe in our candidate, Senator Kwankwaso, who is a friend of ordinary Nigerians, some of whom he has given access to free education, both on and outside the shores of this country.

“He does not require money to get their votes. Only vote buyers such as the PDP and APC, in whose direction Nigerians are not looking, require much money to prosecute the election, but they will be shocked at the polls, even with such amount.

“Any money required as logistics during the campaign will be sourced from party members and ordinary Nigerians, who are already itching to make donations as soon as directives are given to that effect,” he said.

Aside the formal fund raising for the campaigns, political parties and key candidates often get chunk of their campaign money through discreet donations from influential businessmen, corporate organisations and public office holders.

Speaking on the matter, an associate professor of Political Sociology, University of Abuja, Dr Abubakar Umar Kari, described the N5bn maximum threshold for a presidential campaign as ridiculous and laughable.

He said, “Considering the size of the country (36 states, 774 local government areas, over 8,000 wards, and over 170,000 polling units), framers of the Electoral Act were simply being unrealistic, and that is putting it mildly.

“To organise a single campaign rally, especially of national scope such as the flag-off, can gulf half of that amount. A candidate must invite party supporters and faithful from all over the country. Do the mathematics in terms of logistics, accommodation, media etc.

“On election day, each of the polling units requires at least two party agents, who must be mobilised (to move, work and feed). It is not surprising that the provision is rampantly violated. It is a bad law: it conflicts with stark realities on the ground. It is simply impossible to monitor and almost unenforceable.

“As stated earlier on, the laws on election finance, though of noble intendment, are virtually unenforceable. It is enough to restrict how much an individual, group or organisation can donate to a candidate, but trying to regulate spending, even if it is possible – and it is not–is going too far.”