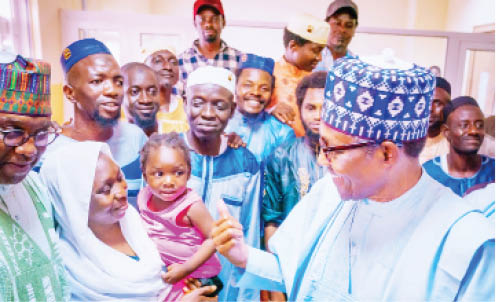 Daily Trust reports that the families of the victims converged on the hospital in the early hours of Thursday and waited for long hours to receive their loved ones who had been in the kidnappers’ den for over six months.

Our correspondent, however, gathered from some family members that many of the victims were in critical condition and receiving treatment at the NAF Hospital. They however declined comments when our correspondent put calls across to them. But, a member of the Presidential Committee that facilitated the rescue of the hostages, Dr AbdulMalik Atta, has explained how the hostages were rescued.

Atta who spoke on Channels Television’s live interview monitored by our correspondent in Kaduna revealed that the prominent terrorists’ negotiator, Malam Tukur Mamu, did everything within his reach to thwart the federal government’s efforts at rescuing the hostages for his own interest.

Atta, who is also a son of one of the kidnapped victims said the terrorists ab-initio never asked for money but Mamu brought money into the whole issue and derailed the entire process.

He said, “Because of Mamu’s introduction of money into the rescue process, the victims’ families had parted with over $200,000 prior to the chief of defence staff’s intervention.

“The Presidential Committee made life-threatening sacrifices, as we had to go into the forest to meet with the terrorists and even slept in the bush.

“It has been six months and one week, but we thank God everything has come to an end now, thanks to the support from the federal government through the office of the Chief of Defence Staff (CDS). We were able to go into the bush and bring back the remaining of our family members.

“We achieved this not through somebody who betrayed the committee and the government, I am talking about the person of Tukur Mamu who did everything within his reach to thwart the efforts of the government for his own interest. As we all know, he is in the hands of the government now. But we thank God, all our family members are back now.

“The bandits never asked for money ab-initio, Tukur Mamu introduced money into the whole thing and derailed the process and kept everybody for the past six months.

We parted away with about 200,000 US Dollars. Thank God the CDS took it upon himself and put in place a committee that never asked a kobo. Every sacrifice being done so far has been personal towards ensuring the release of the victims.

“In the committee, I can assure you that I worked with credible people of the highest order. If I have my way, all of them would be given national honours.  We risked our lives, went to the bush, we slept there in the bush.

“We heard the complaints of those people (the terrorists), even though we knew what they have done is wrong, but we had to engage them.

“Going forward, our security agencies must synergise their operations and the government should open more room for further engagements.”

Earlier, the president met with the freed 23 passengers of the March 28, 2022, Abuja-Kaduna train attack at the Nigerian Defence Academy (NDA) hospital in Kaduna.

The Senior Special Assistant to the President on Media and Publicity, Malam Garba Shehu, said the president made an impromptu visit to the hospital to see the victims of the train attack after commissioning Cadets of 69 Regular Course (Army, Navy and Air Force) of the NDA, in Afaka, Kaduna State.

He said before boarding NAF 001 back to Abuja from the Kaduna International Airport, Buhari detoured to the hospital, where he also thanked the Nigerian military for their brave services in securing the safe release of the hostages from Boko Haram terrorists.

Shehu said members of the Chief of Defence Staff Action Committee led by Maj.-Gen. Usman Abdulkadir (Retd), who facilitated the release of the hostages, were present at the hospital.

The presidential spokesman said the Chief of Defence Staff, Gen. Leo Irabor had earlier introduced the committee members and briefed the president.

The president said that the security challenges in the country had evolved and assumed other dimensions since 2015.

He said the federal government had devised both military and non-military methods to intervene, and even rolled out an amnesty programme to rehabilitate repentant terrorists who surrendered and laid down their arms unconditionally.

Speaking as the reviewing officer at the passing out parade of 69 Regular Course yesterday at the NDA, the president said, “Our tasks as the guardians of the nation are to prepare for the evolving and complex security situations and make sure that no terrorists can threaten Nigeria’s sovereign integrity.

“When this government came in 2015, we inherited a country at crossroads, with bombs going off with frightening frequency even in our cities, and we came in to confront and manage the crisis.

“This administration has since coming on board procured over 550 naval platforms, out of which 319 have been delivered, as part of the aggressive fleet recapitalisation of the Nigerian Navy. We have also increased the number of Nigerian Air Force platforms by more than 38% and enhanced the serviceability rate of aircraft in the NAF inventory by over 70%.

“In pursuing this same objective, the Nigerian Army has received more than 2000 units of various Armoured Fighting Vehicles, guns, and equipment. These are in addition to improved funding of the three Services along with other security and intelligence agencies. These comprehensive and systematic acquisitions within 7 years are not only unprecedented in the past 38 years, but they also align with our pledge to safeguard and strengthen the security architecture of our country.”

He added, “In our bid to fulfil our promise to neutralise Boko Haram terrorism in the North East, which had spread to other neighbouring countries when we took over, the Armed Forces liberated areas occupied by the terrorists and gave the residents a new lease of life, and our commitment to resettling and rehabilitating the victims of the tragedy has been unwavering.

“I want to seize this opportunity to appeal to Nigerians that, although we have recorded successes in the conflict inherited, especially in the North-East, the security challenges in the country have evolved and assumed other dimensions in some areas. We have devised both military and non-military methods to intervene, and even rolled out an amnesty programme to rehabilitate repentant terrorists who surrendered and laid down their arms unconditionally.

“Our tasks as the guardians of the nation are to prepare for the evolving and complex security situations and make sure that no terrorists can threaten Nigeria’s sovereign integrity.”

The president ordered the service chiefs to replicate the successes in the North East in other parts of the country and called on all Nigerians to continue to support the Armed Forces and security agencies. He reminded the graduating cadets that there is no better time to prove their valour and demonstrate the virtues upon, which the NDA was founded in the defence of the country with uncompromising dignity and honour.

He urged them to replicate the social cohesion they experienced during their time at the academy and be the unifying and incorruptible models of those that trained them to protect and be bound by esprit de corps.

The Speaker, House of Representatives, Femi Gbajabiamila, has said the government owed the victims, their families and all other Nigerians over the pervasive insecurity. In a statement by his Special Adviser on Media and Publicity, Lanre Lasisi, on Thursday, the speaker said it was comforting when the federal government announced their release.

“This is comforting news for the kidnapped victims and all Nigerians who carried them in our hearts, praying and hoping for a resolution to this unfortunate saga.

“Now begins the process of healing and recovery for the victims and their families.  This will not be easy.  These victims and their families deserve and will receive the support of this House of Representatives and the government of the Federal Republic of Nigeria as they work to rebuild their bodies and spirits and restore normalcy to their lives.

“This morning I remember the ones we lost in this attack.  I pray for the repose of their souls.  And for the families who still mourn and miss them, I know that words will never be enough to convey your loss or reduce your grief.  I pray that you will find peace and healing through the grace of God.

“Like all the other terrorist attacks of the past two decades, this attack on the Kaduna-bound train has devastated lives and caused untold suffering,” he said.

Gbajabiamila added that the prevailing security challenges in the country should not discourage Nigerians from being attentive to their personal and collective security at all times.

“Let this incident renew our commitment to end the scourge of terrorism in Nigeria.  Too many people have suffered for too long.  It’s past time to end this pain and suffering.

“We owe the victims, their families and all Nigerians a debt.   That debt will only be fully paid when the perpetrators of this attack are identified and punished for their grievous sins against the nation,” he added.