208 steps to the great African Renaissance Monument in Dakar

After an exhaustive series of trips across the African continent,  civil society practioners attending the 6th AROCSA conference took time off to visit the iconic… 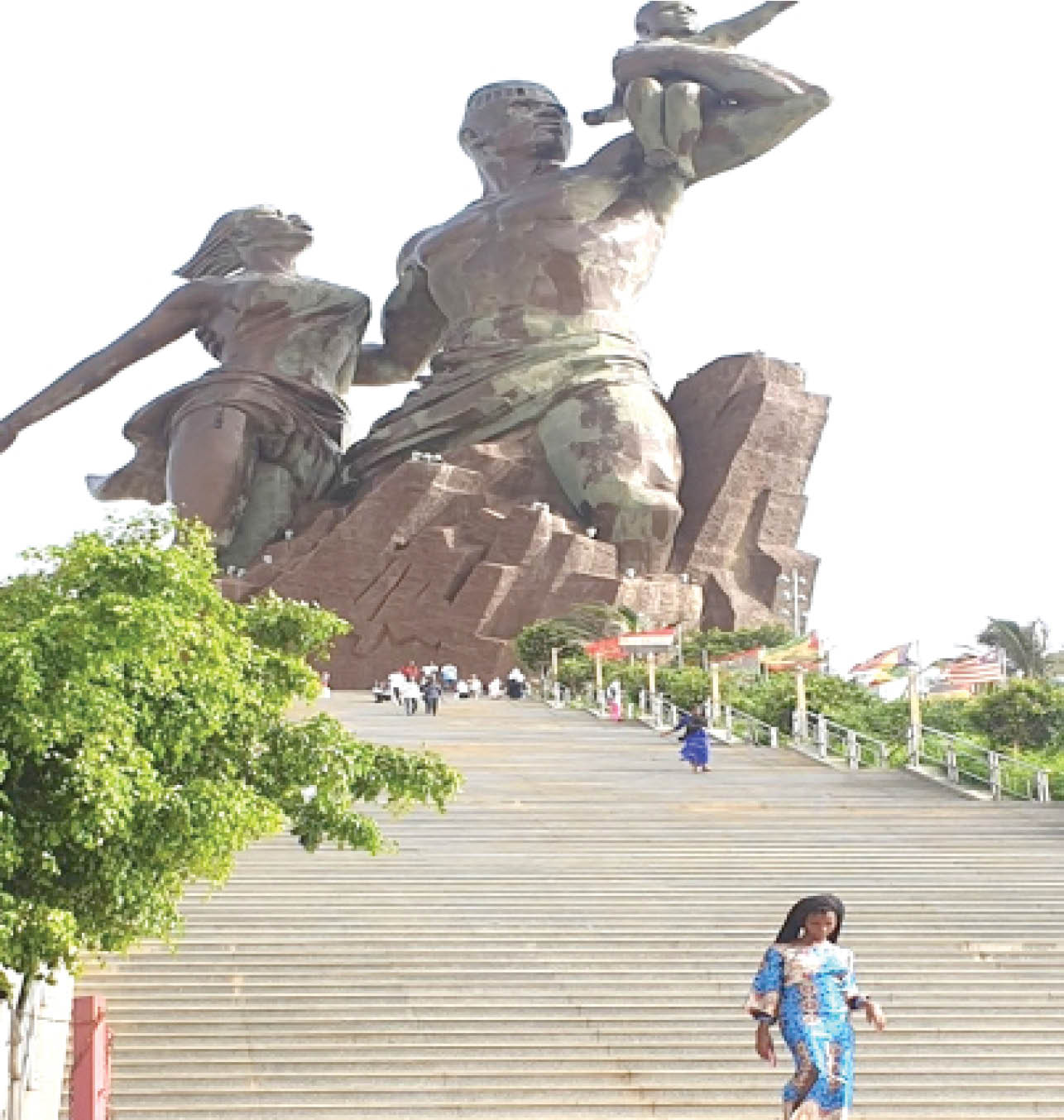 Monument of African Renaissance in Dakar

After an exhaustive series of trips across the African continent,  civil society practioners attending the 6th AROCSA conference took time off to visit the iconic African Rennaisance monument. A gigantic brinze made caricature of an African family depicting freedom and sovereinghty of the black continent. Participants explored the mammoth edifice at the city of Dakar.

From September 6th to 9th, African Civil Society practitioners converged on Dakar, Senegal, for the 6th African Association for Research on Civil Society in Africa (AROCSA). AROCSA is a non-profit organization founded in 2012 with support from the Ford Foundation as a focal point for researchers and practitioners on civil society on the African continent to dialogue and frame research and intervention agendas.

One important high point of the conference was the commemoration and recognition of the impactful contribution to developing African civil society by the past Ford Foundation West African Regional Director, Innocent Chukwuma, who passed away on April 3rd, 2021.

A team of 12 civil society/government officials and professionals sponsored by the development Research and Projects Centre (dRPC) joined other civil society groups from the African continent to discuss safeguarding and strengthening the role of CSOs in human and environmental health in Africa.

After a thorough brainstorming exercise, the team decided to visit the famous African Renaissance Monument to learn about the history and relevance of this monumental statue that straddles Dakar’s horizon.

The African Renaissance Monument is a 49m (161 ft) tall bronze statue located on top of one of the twin hills known as Collines des Mamelles, on the outskirts of Dakar, Senegal. The statue overlooks the Atlantic Ocean at the Quakam area of the city.

According to the profile of the statue published by the Senegalese Tourism affairs board, the statue was designed by the Senegalese architect Pierre Goudiaby after an idea presented by President Abdoulaye Wade and it was built by the Mansudae Oversea Project, a North Korean firm. The renaissance monument is built on top of a 100-meter-high hill, and its construction began in 2008. It was commissioned on the 4th of April 2010 to commemorate the 50th anniversary of Senegal’s independence from France.

Abdoulaye Wade’s vision was to document the emergence of Africa’s new era of freedom, independence and sustainability. The statue shows a family drawn up towards the sky, the man carrying his child on his biceps and holding his wife by the waist. The then President saw the statue as representing an African family resolutely turned towards the North-West.

“It brings to life our common destiny. Africa has arrived in the 21st Century standing tall and more ready than ever to take its destiny in its own hands. This monument does not belong to Senegal. It belongs to the African people wherever we are,” President Wade said.

Running away from an exhaustive intellectual session, the participants needed to scale 208 steps to reach the bottom of the statue. Many made it, a few couldn’t. Dakar is called ‘the city of balcony’ because every house in the city has a balcony or two. This, we learned, was to reflect the history of western influence as colonialists flocked through the Atlantic Ocean to settle in Dakar in the early century.

As we settled to watch the splendour of the city from the base of the statue, interested tourists could continue beyond the base and reach the head of the statue using a lift that takes one to the top of the 49 meters statue – taller than the statue of Liberty in New York.

Two hours of gruelling efforts to reach the top, and after watching the splendid nature of the Atlantic Ocean and the city’s balcony tradition, we came back to the Café De Rome, where the participants continue their deliberations the following day.

A history of Dakar city, the capital of Senegal, as revealed by Wikipedia shows that the city was one of the chief seaports on the western African coast. It is located midway

between the mouths of the Gambia and Senegal Rivers on the south-eastern side of the Cape Verde Peninsula, close to Africa’s most westerly point. Dakar’s harbour is one of the best in western Africa, protected by the limestone cliffs of the cape and by a system of breakwaters. The city’s name comes from dakhar, a Wolof name for the tamarind tree and the name of a coastal Lebu village that was located south of what is now the first pier.

Dakar was founded in 1857 when the French built a fort on the site of the modern Place de l’Indépendance to protect the interests of merchants who had been settling there for 20 years and of the residents of Goree, a waterless island in the lee of the peninsula that once was an outpost for slave and other trading. By 1862, a short breakwater had been built on Dakar Point and a town laid out on the low limestone platform behind the sandy beach. Another generation elapsed, however, before Dakar gained its supremacy over Gorée and Rufisque, the latter being a settlement located 13 miles (21 km) east along the peninsula which had become an important export centre for the peanut (groundnut) trade. The opening in 1886 of Western Africa’s first railway, from Saint Liuos to Dakar, was a great impetus to Dakar’s development, and the railroad also stimulated the cultivation of peanuts in the vicinity of its track. In 1902, Dakar replaced Saint-Louis as the federal capital of French of West Africa.

During World War 1, Dakar’s port grew in importance. In 1923, a railway line to the Mali was opened and brought new transit trade to the port. Extensive improvements were made, and by the 1930s, Dakar had become the region’s chief peanut-shipping port. During the World War 11, Dakar, like all of French West Africa, recognized the authority of the Vichy administration of France in 1940, and the efforts of the Free French to secure the town in the same year failed badly. Further development of Dakar was delayed until French West Africa rallied to the Allies in 1943.

The city has several contrasting districts. In the southern district are public buildings, hospitals, and embassies. North is the business district, which is focused on the Place de l’Indépendance. North and east lie the quarters associated with the port, such as the port proper, the fishing harbour, and the peanut-export sector. Near the latter, and close to the railway, are the older peanut-crushing plants and other factories, and farther north is the industrial estate of Hann.

Dakar is one of tropical Africa’s leading industrial and service centres. Its industries include peanut-oil refining, fish canning, flour milling, brewing, truck assembly, and petroleum refining. Many cultural institutions are in Dakar, such as the Grand National Theatre of Dakar; the Daniel Sorano National Theatre; the Théodore Monod African Art Museum, a museum of the Fundamental Institute of Black Africa (Institut Fondamental d’Afrique Noire; IFAN) that focuses on the anthropology and art of Africa; and the Museum of Black Civilizations, which has a large collection of African cultural artifacts. There are also excellent museums of the sea and of history in nearby Gorée. The corniche road (cut into the cliff) around Cape Manuel offers fine views of the harbour and the islands.

The Fisherman Mosque is another iconic structure by the Atlantic Ocean. Built to serve as a divine abode for the local Fishermen, the mosques beautify the convergence between the fishing boats and the prayer mats.

Designed in the Turkish architectural masterpiece, the Fisherman Mosques provide a serene divinity as mosques goers face the Atlantic Ocean appreciating the magnificence of the mighty Ocean while praying. And, through the length of the ocean from the Fisherman Mosques, lies hundreds of young and old city residents exercising. The exercise, I was told, was introduced by the government after increased cases of cardiovascular disease ravaged the coastal city of Dakar in the late 2000 AD.

It is in between these beaches that and besides the Fisherman mosques that the gigantic monument of Renaissance beholds the skies of Dakar, enveloping an atmosphere of mastery and history.

Beneath the feet of the 208 steps lies the fresh fruits joint. This where the AROCSA exhausted participants sat to cool down the effect of the climb as we prepare to return to the conference halls of Café De Rome in the middle of Dakar City.

Countries after countries narrate their experiences and provide solutions on how civil societies can work together with government officials to promote and strengthen human and environmental health in Africa.

In his keynote address at the conference, Professor Mamuoda Ndiaye, of the University of Dakar, called on African civil society organizations to deepen the public health policy advocacy capacities and strategies.

In her presentation at the conference, Dr Salam Anas Ibrahim, the Director Family Health, Federal Ministry of Health, Nigeria, stated that: “Through a series of strategic engagements and partnerships, PAS has contributed to the launch of important policy documents such as the family planning Blueprint, FP2030 agenda, the Task shifting, and Task sharing policy and supported the implementation of maternal and child health interventions both at the National and subnational level.”

On their part, the PACFaH@Scale NGO leaders at the session (from Alumni Association of the National Institute AANI-Lagos and Medical Women Association of Nigeria Kano) put on record the project’s contribution to capacity development of their organizations, and positioning these civil society groups to take up leadership roles in the policy advocacy space.

The AROCSA conference might have come and gone, but the memory of the great work of African civil society working to safeguard the continent’s human and environmental health is a work that continues as we move to 2023 and beyond.