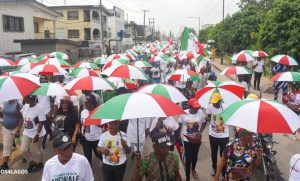 Chieftains and members of the Peoples Democratic Party (PDP) in Lagos yesterday staged a massive road walk to canvass support for the presidential candidate of the party, Alhaji Atiku Abubakar and his running mate, Dr. Ifeanyi Okowa.

The participants walked for about 7 kilometers from Fadeyi to Maryland Under Tunnel.

All the candidates seeking elective positions, state and local government executive members were also in attendance.

Addressing the crowd at Maryland, Doherty said that the umbrella walk was a symbol of unity of the party in the state, saying members of the party were ready to rescue Nigerians from the ruling party.

The campaign chairman urged Nigerians to grant the former ruling party another opportunity to right all the mistakes it committed in the past.

He assured that Atiku and Okowa government would run a government of unity and development.

He said, “Umbrella is a symbol of unity to bring everybody together and every ethnic group in solidarity for Atiku/Okowa. It is to show the unity that we have in Lagos State and in Nigeria.

“It is also to tell the ruling party today that PDP is going to unite this country immediately we enter government in 2023.

“Nigerians have tried PDP and tried APC and they can see the difference, let them give PDP another chance, we will correct our mistakes.”

Also, the Lagos PDP Chairman, Mr. Philips Aivoji, said that the party is formidable and enduring as it has been on ground since 1998.

Aivoji stressed that the ‘Umbrella Day’ was significant, adding, “Everybody will come under protection with PDP in power”.

“Even thousands of people from the APC are coming under the umbrella. We are ready to take over Lagos State and Nigeria. Umbrella stands for coverage and we will be under protection as a nation.

“Atiku Abubakar was the Vice President of Nigeria and we know what he did to support former president Olusegun Obasanjo.

“Look at his manifestoes, he promised to bring people together irrespective of tribe or religion,” he said.

Capt. Shelle who is the Deputy Director, PCC Elections Management expressed confidence that Atiku would win the 2023 presidential election, describing him as a mentally stable, intelligent, articulate and selfless person.