Ahead of 2023 general elections, the ruling All Progressives Congress (APC), yesterday inaugurated all councilors elected under its platform in order to begin mobilisation at… 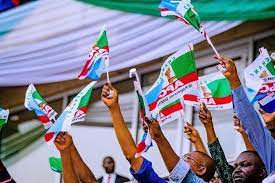 Ahead of 2023 general elections, the ruling All Progressives Congress (APC), yesterday inaugurated all councilors elected under its platform in order to begin mobilisation at the grassroots in support of the party.

The councilors under the auspices of National Progressive Councilors’ Forum (NPCF), led by the councilor representing Guringawa ward in Kumbsoto Local Government of Kano State, Muslihu Yusuf Ali, were inaugurated by the Chairman of the Caretaker Committee of the party, Mai Mala Buni.

Buni, who was represented by Organising Team of APC, Alhaji Alpha Yahaya (Dan masanin pand) charged the newly inaugurated NPCF executive, to assist the party in its growth and ideology to be acceptable within all the communities.

He said, “We know all politics is local, and we understand that the main politics is at the grassroots, that is why we can’t joke with councilors. Your objective is to assist the party (APC) in its growth and ideology of its acceptability within our community.”

In his reaction, the chairman of NPCF, Ali, said they would not let the party down in its quest register the party in the minds of people at local level.

“We are the closest to the grassroots and serve as the first, and in some cases only contact to governance. Hence, we shall serve as developmental agents of growth in accordance with the objectives of our dear party,” Ali said.

He, however, urged all States being ruled by the APC governors to ensure it conducts Local Government elections before 2023 in order avoid losing their respective states to the opposition parties.