2021: Our big stories that made impacts

Besides its key traditional functions of information, education and entertainment, the mass media also play a significant role in bringing about socio-economic and political change… 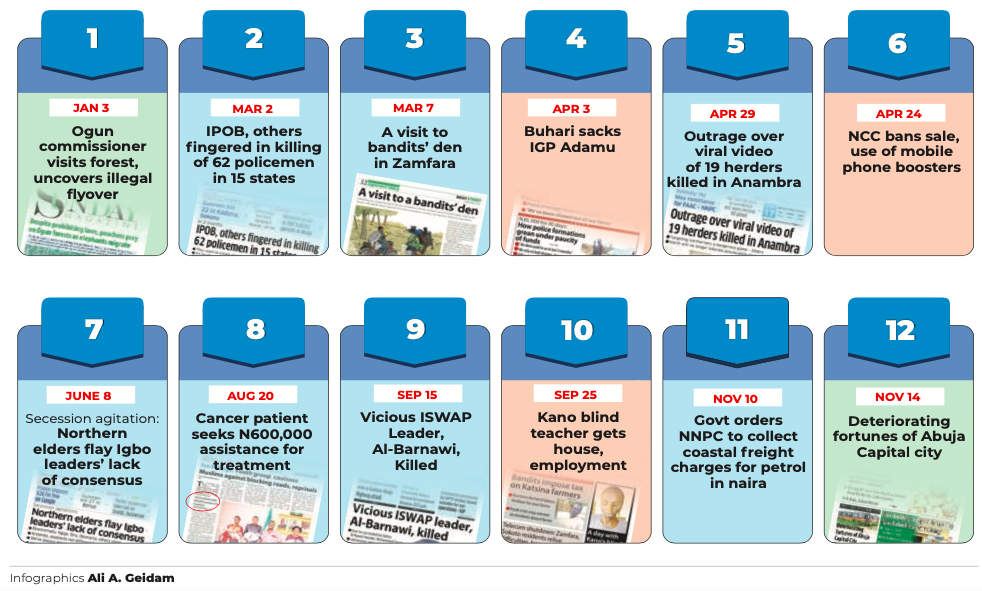 2021: Our big stories that made impacts

Besides its key traditional functions of information, education and entertainment, the mass media also play a significant role in bringing about socio-economic and political change in society through its reportage.

The media through the instrumentality of news reports, features, investigations, analysis, editorials, commentaries, discussions, documentaries and talk show programmes, Trust has published many big among others, bring attention to various ills in the society in line with its watchdog function.

Since January this year, Daily and exclusive stories that made impacts. Some of these stories changed the lives of many people for the better while others compelled the relevant authorities to take some actions or decisions. Some of the stories also led to deep and insightful conversations on how to change certain narratives.

One of the impactful stories of Daily Trust in 2021 was that of a Kano blind volunteer teacher, Dahuru Idris Abdulhamid, who got a house and a permanent job after his story was published in both print and digital platforms of the paper.

After the story was published on September 25, 2021, which was anchored by one of our promising multi-media journalists, Zahraddeen Yakubu, a philanthropist bought and donated a house to Dahuru who had been living in a rented apartment with his parents. During a follow-up interview with the Daily Trust, Dahuru expressed appreciation for the gesture by the philanthropist but appealed for a permanent job.

The state government, through its Commissioner for Education, Muhammad Sanusi Sa’id Kiru, had after the Daily Trust report promptly reached out to Dahuru who had an audience with Governor Ganduje.

Mohammed Abubakar Adamu, the second Inspector-General of Police under the administration of President Muhammadu Buhari, was fired on April 6, 2021, exactly 28 days to the end of his extended tenure.

The main reason for the decision, it was gathered, was an expose published by the Daily Trust on Saturday, April 3, which revealed how police formations across the country suffered for failure to release operational funds by the police top management. The report was titled: N30, 000 for 90 days: How police formations groan under paucity of funds.

On November 10, 2021, the federal government directed the Nigerian National Petroleum Company (NNPC) Limited to resume the collection of freight charges in naira denominated invoices for excess capacity for coastal movement of petroleum products, using the Import and Export (I&E) window rate for the time being.

It also directed petroleum marketers to revert to the official depot price for the sale of petrol nationwide.

The directive came barely 24 hours after a Daily Trust report on the refusal of the Nigerian Maritime Administration and Safety Agency (NIMASA) and the Nigerian Ports Authority (NPA) to collect freight and port charges in naira as alleged by petroleum marketers.

The federal government had in 2018 directed both agencies to collect freight and port charges in naira but marketers, especially depot owners, insisted that the port agencies were flouting the presidency’s directive that freight charges be collected in naira and not in dollars.

The Nigerian Communications Commission (NCC) on May 18, 2021, banned the sale and use of GSM network boosters (for mobile connectivity) especially by banks, residents, government agencies, among others to improve telecommunications services. The Commission gave the 14-day Pre-Enforcement Notice in a statement signed by the Director, Public Affairs, Ikechukwu Adinde.

This action by the NCC came less than one month after Daily Trust on April 24, 2021, reported that business owners in the Sabon Gari Market in Kano and other business areas said they bought boosters to improve the reception of the poor telecommunication networks in their areas, which has a wider implication.

IPOB, others fingered in killing of 62 policemen in 15 states

This report, which was a lead story published in the Daily Trust of March 2, 2021, made a significant impact as it generated deep conversations and spurred the authorities as well as other stakeholders to take actions in checkmating the onslaughts by suspected IPOB members in the South East region. It also forced relevant stakeholders to start calling IPOB by name instead of simply saying “unknown gunmen” while reporting atrocities committed by the outlawed group.

The above story published in Daily Trust of April 29, 2021, is one of the stories that made an impact as it further generated conversations and reactions from the authorities on the atrocities being committed by the Eastern Security Network (ESN), an arm of the outlawed Indigenous People of Biafra (IPOB).

The above report, which was published as Daily Trust’s lead story on June 8, 2021, highlighted the concerns over the undignified silence of top Igbo leaders amidst the violent activities by IPOB members in the South East.

Hours after the report, some top Igbo leaders began to speak up and on June 19, 2021, the South East governors with the leadership of Ohanaeze Ndi-Igbo after a joint meeting came out to boldly condemn secessionist threats in the South East.

A visit to bandits’ den in Zamfara

One impactful report by Daily Trust in 2021 was the report by our Deputy General Editor, Abdulaziz Abdulaziz after he took a risky and adventurous tour to bandits’ enclave at Sububu Forest in Zamfara State on February 17, 2021, where he had a rare face-to-face encounter with a bandits’ leader, Shehu Rekeb and his gang members.

The moving but frightening report, which was published both in the print and on the digital platforms of the newspaper went viral and generated deep conversations in the country.

Following the report and other subsequent follow-up reports on the activities of bandits in the Zamfara axis, the authorities at both the national and state levels took drastic measures – including military operations and shutting down telecommunication services – to checkmate the activities of the elements that have held the state to ransom for too long.

The above special report, which was published on November 14, 2021, in the Daily Trust on Sunday among others, beamed a searchlight on the infrastructural decay and environmental issues in the FCT and equally highlighted how the FCT Minister, Muhammad Musa Bello had been running affairs without Mandate Secretaries (the equivalent of commissioners in states) two years after.

Barely a week after the Daily Trust report, the FCT Minister on November 22, 2021, announced the appointments of Mandate Secretaries as approved by President Muhammadu Buhari.

The appointment of the Mandate Secretaries, which was announced in a statement issued in Abuja and signed by the Chief Press Secretary to the FCT Minister, Anthony Ogunleye, was based on recommendations by the minister.

Less than a week after Daily Trust on Sunday published an investigative report on the activities of poachers in Ogun State forests, a government monitoring team, led by the Commissioner for Forestry, Tunji Akinosi, visited the area and uncovered an “illegal flyover bridge’’ in Omo Forest Reserve.

The three-page report by Daily Trust on Sunday, titled, ‘Despite prohibiting laws, poachers prey on Ogun forests as elephants migrate,’ and published on January 3, 2021, revealed how poachers operated with little or no checks.

The reserve, the largest in the state, covers 135,906 hectares and spreads across Ijebu East and North Local Government Areas.

Akinosi, who led a monitoring team to Laagan village, the site of the ongoing construction, described it as “unauthorised construction’’ and ordered its destruction within two weeks.

Published on September 15, 2021, the Daily Trust highlighted how the leader of the Islamic State West Africa Province (ISWAP), Abu Musab Al-Barnawi was killed in the last week of August, this year.

The report of Albarnawi’s killing, which trended and generated a lot of reactions and conversations, was confirmed much later on October 14, 2021, by the Chief of Defence Staff.

After the above Daily Trust report, which was published in the Benue/Plateau Trust segment of the paper on August 20, 2021, a philanthropist from Kano State undertook to foot the medical expenses of the patient, Bashir Sulaiman Sa’ad at the Aminu Kano Teaching Hospital, Kano.

Apart from the stories above, Daily Trust had also anchored many others that prompted action, reduced tension, prompted serious moderations, or policy statements.

These included: ‘Kano beats entire 5 South East states in VAT collection’,  ‘Government yet to implement Oronsaye report on rationalisation of federal agencies,’ ‘No evidence planes drop arms for gold in Zamfara,’ and ‘how EFCC, others converted seized property to persona use’.

The newspaper, the Trust TV and other digital platforms of Media Trust are poised to do more in the coming years.