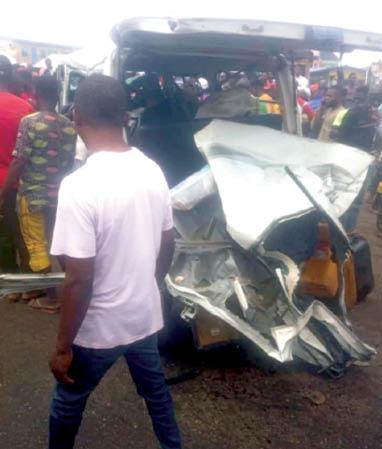 Two persons died yesterday while five others sustained injuries in an accident involving a Toyota Hiace bus and a Mercedes Benz truck at Mowe Bus Stop on the Lagos-Ibadan Expressway.

The Sector Commander, Federal Road Safety Corps (FRSC) in Ogun, Ahmed Umar, confirmed the incident to newsmen in Abeokuta and attributed the accident to over speeding and dangerous driving on the part of the bus driver which led to him ramming into the moving truck.

He said, “A total of 20 men were involved in the accident, five of who got injured while two deaths were recorded.”

The FRSC boss further stated that the injured victims had been taken to Famobis Hospital, Mowe, while the deceased were taken away by their families.

He cautioned motorists against dangerous driving, pointing out the rate at which most commercial drivers refused to obey common driving rules and regulations.